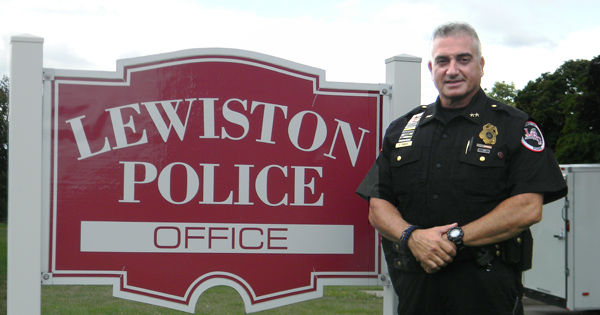 The Town of Lewiston has a new police chief.

At its Monday meeting, the Lewiston Town Board, as anticipated, named long-time Lewiston Police Sgt. Frank Previte as the new chief of the 18-member department. Previte succeeds Chris Salada, who retired last month to assume a position in the private sector with M&T Bank.

For Previte, 52, a long-time town resident and 1981 Lew-Port grad, it marks the latest achievement in a decades-long career in law enforcement.

Previte, who attended Bible school, also served as an associate pastor for 12 years in his native Niagara Falls. He serves today as chaplain with Lewiston No. 1 Volunteer Fire Co.

Previte went on to join the Lewiston Police Department as an appointed officer in the early '90s under former Chief Ron Winkley soon after the department consolidated. He worked midnight road patrols.

He went on to take and pass the civil service test for officer, took and passed the sergeant's exam and assumed administrative duties under Winkley in the late '90s.

"It was when my involvement as supervisor first came in," Previte said. "I was working mostly with Chief Winkley and learned a lot from him. He gave me the opportunity (for) the FBI National Academy" in 2005.

"It was the best experience in my training career," Previte noted.

Previte also has certifications as a hostage negotiator, as a weapons training instructor for the department, a certified firearms instructor and a defensive tactics classroom instructor with the Niagara County Police Academy.

"I'm very driven on whatever I do," Previte said. He added that, in his career, he's also been recruited by other agencies, but he has preferred to remain with Lewiston Police.

"This has been my home, my community," said Previte, a father of two who has been a resident of Lewiston since the fifth grade. "I have chosen to stay, do what I did, because I thought I could have an impact.

"I wanted to have an impact, to make this a more professional department."

In assuming his new role, Previte said he seeks to strengthen the department's relationship with the Lewiston community.

"I've had the opportunity to be second in charge under both chief Salada and chief Winkley," Previte said, adding, administrative-wise, there's not much he plans to adjust within the department in the future.

"The things I really want to focus on, strengthen, is the relationships we have with the community. One of the first things I'm interested in is to reintroduce, bring back the neighborhood watch program. It keeps us (the department) really in touch with the public," he said.

Other areas Previte would like to focus on beyond crime prevention are greater working relations with the Chamber of Commerce and Lewiston business community, stronger department ties with the 12 schools within the Lewiston community, maintaining good relations with Lewiston residents and keeping the LPD operating as an efficient, professional force.

"Local policing is what it's all about," Previte said.

He said he takes pride in the dedication and professionalism of Lewiston's officers. Previte spoke highly of their community involvement - of living here and being a familiar face. He stressed department professionalism and good relationships are his priority.

"It's what we're all about," Previte said. "It's my job to make Lewiston better. ... We aim to make it the best community to live in. My officers have the best intentions; they care about this community."

Previte invites input from Lewiston residents and businesses - both suggestions for improvement and criticism.

"Come talk to me, let's make (Lewiston Police) the best for services, for protection, for the community," he said.

The Lewiston Police Department is located on the Lewiston-Porter campus on Creek Road. Previte can be reached at 716-754-8477.