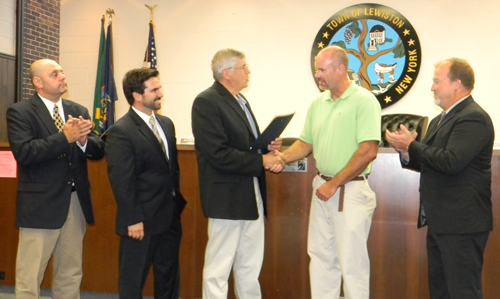 Town of Lewiston Board approves paving

With Supervisor Dennis Brochey motorcycling out on Route 66 to Vegas, and Councilwoman Beth Ceretto absent too, the Lewiston Town Board carried on Monday with a number of lower-key but newsworthy matters.

"Really no surprises," Blazick said of the report, adding the session was merely intended to bring board members up to speed as 2015-16 town budget discussions approach. On a related note, Blazick said she was requesting preliminary budgets from all town department heads by Sept. 1.

Blazick also requested and was approved for a transfer of $13,000 from a dormant New York Power Authority account (H-99) to Town Hall renovations (H-55) to cover the paving of the Town Hall parking lot.

"(It's) a lengthy paving job," Janese said of the Pletcher Road work. He is awaiting pavers from Niagara County Public Works at a cost of $21,000 per day to rent. Thus far, Janese said he was staying within his board allocated $250,000 paving budget, but noted it was dwindling.

In other highway matters, Town Engineer Bob Lannon of Conestoga-Rovers & Associates recommended board approval of an $80,452 bid from NFP & Sons Inc. of North Tonawanda to handle the curb replacements and paving work planned for Lauren Court. The roadway had been a discussion item at past meetings where board members heard about deteriorated country curbing and related milling and paving needed along a 530-foot stretch.

Janese, who earlier had advised the board to pursue outside bidding for the job rather than have town highway crews tackle it, told Deputy Supervisor Mark Briglio he could handle the paving work. That didn't fly with the board, however, as Lannon said the NFP bid would adequately cover both jobs and its work would be guaranteed for one year. He advised against splitting the work up now, adding that any new discussions and further bidding would bring extra cost to the town.

After some discussion, Briglio and board members agreed and approved a resolution from councilmen Ron Winkley and Al Bax for NFP & Sons to handle the work, including paving.

•Town Councilman Bill Conrad updated the board on the pending Lewiston pathway project approved earlier following negotiations by the town, NYPA and the state Office of Parks, Recreation and Historic Preservation. The plan calls for completion of a bike/walking pathway from Devil's Hole, through NYPA property and down hill along the Robert Moses Parkway to Artpark, and then link with the lower river Great Lakes Trail out to Youngstown.

Conrad said the state Department of Transportation would administer all future phases of construction at no cost to Lewiston, with the town's only funding responsibility being its utilizing of matching Greenway funds as needed to handle the work.

The project is expected to be completed by next spring, and Lewiston would then be responsible for the maintenance of the path.

•Blazick reported a Winkley request for payment of 1,041 hours of unused and sick time for recently retired Lewiston Police Chief Chris Salada was not approved. Per the town's employee manual, she said up to $3,000 would be authorized - nothing more.

•Upcoming for Monday, Aug. 24: The regular Town Board monthly meeting will lead off with a 5:45 p.m. public hearing to extend Lewiston's moratorium against any equate (biosolids) activity. Other events planned for that session are: a 6 p.m. public hearing on the French Landing 27-lot single-family home subdivision eyed for the east side of Lower River Road on the 4200 block; the aforementioned town audit presentation by Brown and Company; and a discussion session with Scovell Drive residents to discuss town green space problems and future recourse.