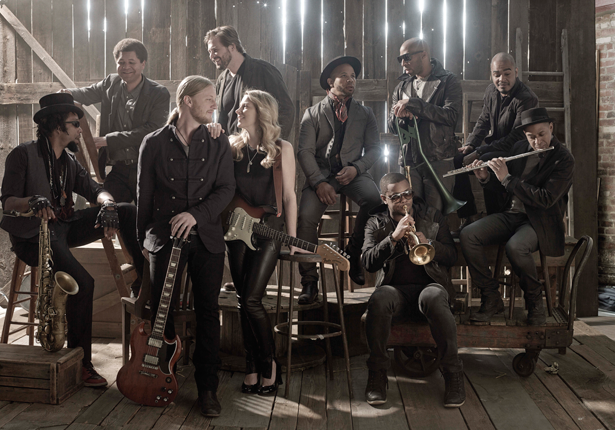 Tedeschi Trucks Band (Photo by Mark Seliger; click it for a larger view)

'Tuesday in the Park' headliner Aug. 4

Five buses, two trucks and some of the world's top guitar players will roll into Lewiston Tuesday when the "Wheels of Soul" tour hits Artpark. The Grammy-winning, 12-piece blues-rock Tedeschi Trucks Band is teaming with soul singer Sharon Jones and the Dap-Kings (an 11-piece act), and Doyle Bramhall II (who's played with Clapton) for a four-hour show Derek Trucks said would be unlike any other double-bill concert.

"With a tour like this, you're not going to see three groups that good anywhere other than (here)," he said. "There's a lot of bang for your buck. Sharon and her band get out there and just bring it for an hour and a half. And Doyle's band hits the ground running. Our 12-piece band gets up and does its thing. And by the end of it, it's everybody on stage."

Trucks added, "I think it's a bit of a lost art people playing music for the right reasons and getting out and doing it for the right reasons. I think we're a little bit idealistic that way. Occasionally, we'll play festivals where there'll be four or five bands that you actually want to watch. But it's pretty rare. So we just figured we would try to do it ourselves."

The idea to pair these acts came about for the simplest of reasons.

"It's really just finding bands you want to listen to every night and be on the road with for extended periods," Trucks said. "We know Doyle really well. He's worked on every record we've done together. (We're) close friends. He has his solo thing back together; almost finished a new record; and it was kind of a no-brainer to bring him out.

"There's not many bands that do what Sharon and what the Dap-Kings do. We've been fans of their stuff. We never really toured with them or hung out with them before this, so we had hoped that our feeling about the band and the reality would line up. And it's been really great. She's been sitting in every night, and a lot of her band has been sitting in. There's been some great moments."

Rolling Stone magazine called Trucks the 16th best guitar player of all time. While he inspires many, Trucks said the band's other half (also his better half), Susan Tedeschi, inspires him.

"It's a large task to get in front of a band this big and loud and rambunctious," he said. "It really is needed to be the focal point and to sing over the top of it. I really can't think of anyone else that I'd ever played with that can really pull it off. It's pretty amazing. And she does it so consistently. I don't really ever hear her have a bad night. There are some nights that are better than others. Some nights that are just magic. But her bottom line is really, really high.

"That goes for her guitar playing, too. She just has the ability to just get it done. She connects with people; she inspires everybody on stage. That's what you want from everybody on stage, but especially the person that's standing in the middle singing the tunes. That's a big part of it. You don't mind hearing songs multiple times when there's always life breathed inside of it. We're lucky that way."

Trucks said he's pretty excited about his other bandmates, too.

"It's a unique group," he said. "Most bands that are this big, there's not a lot of improvisation going on. With this band, it's very much - it's very different from night to night and from song to song. There's a lot of 'we don't even know what's going to happen' moments.

"The musicianship on the stage, it's pretty hard to beat. I mean, there are some amazing, amazing players up there. Every night I look across the stage and somebody does something that completely turns your head.

"We feel lucky to be a part of a band like this. I've been on the road a long time, and I've never been a part of anything quite like this. It really is a unique spirit. There's not a lot of groups that do that anymore. It's difficult bringing a 12-piece band on the road in this day and age, and it says a lot about everybody on the stage that they're doing it for the right reasons.

"It's an amazing group."

Initially, Trucks and Tedeschi were splitting time between this band and successful solo and side projects. In recent months, they decided to concentrate solely on this group.

"I think for years there was so many things going on, with me being out with The Allman Brothers and the Clapton thing, and even my solo band and her solo band," Trucks said. "I think there was a perception when we would tour together early on with this band that it was just something to do. The question would always be, 'So when are you going back and doing your solo band?' Or 'When are you doing The Allman Brothers again?' And I think, at this point in our lives, this is the focus."

Tedeschi Trucks Band, Sharon Jones and the Dap-Kings and Doyle Bramhall II perform Aug. 4 as part of "Tuesday in the Park" concert series at Artpark. The show begins at 5:30 p.m. Find tickets at the Artpark box office, 450 S. Fourth St., Lewiston, and online at www.artpark.net. 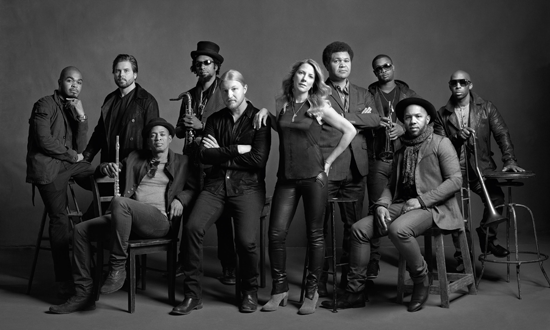