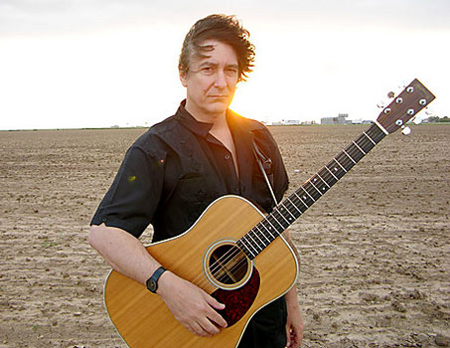 Stan Ridgway brings real 'Spirit of the 80's' to concert

The musical sounds of the '80s have been reimagined in recent years by a number of popular artists - some of whom weren't born or were just a few years old in the Ronald Reagan-Vanna White-Rubik's Cube decade.

Do they like this music? Maybe. Are they sampling it because it's trendy and they can sell more records? Probably.

Stan Ridgway would say that homage is ironic, given that, "The 80s music pulled in imagination and creativity. It was eclectic," he said. "It was an attitude of 'Hey, I'm here! I'm going to make something.' It was the idea of starting something on your own, not to be part of a machine. We were all doing something different."

Ridgway will bring that idea of originality - plus his unique voice and sounds - to Academy Park in Lewiston Friday, Aug. 7. He will headline the first night of the Spirit of the 80's weekend.

"I like to play different kinds of music," he said. Ridgway offers a mixture of genres in his songs. The classic "Camouflage" is reminiscent of an old Western theme, while his latest release, "Mr. Trouble," evokes images of the bayou. "It's good to be different in an age where everything has been so sliced and diced."

A captivating storyteller, Ridgway himself found inspiration in the world that surrounded him during his formative years in the 1960s. In particular, the artist cited Rod Sterling's "The Twilight Zone" as introducing him to the idea of an encapsulated story told in a finite period.

"They were little morality plays," Ridgway said. "They were dark, yet entertaining. They kind of informed me of what storytelling could be."

This influence is notable in one of Rigdway's 1986 releases, "Drive, She Said," which weaves a tale of a mysterious taxi ride from the driver's point of view.

"Songs were stories back then," Ridgway said. "The Beach Boys' 'Surfin' U.S.A.' painted a picture in my mind. Songs became like small films to me, with a beginning, middle and end."

Ridgway said the music of the '80s was different, because the time was different. "A lot of discoveries and friendships were made over the arts," he said. "Ideas were exchanged between people, face-to-face, not like today where everyone Googles it. Today we are living in the science fiction age. Is it really as it appears?"

"Now, there's a string of information that's broken (with music)," Ridgway said, describing the music industry's current focus on marketing and algorithms. "We used to look at the back of album covers to see who were the team of people behind the recording and map them to other things they had done. This is how we discovered things. We were determined to understand who was part of this village of music."

While music creation in the 21st century may be approached differently, it hasn't impacted Ridgway's popularity. The former Wall of Voodoo frontman continues to tour, returning again to the East Coast after a brief absence.

In Lewiston, fans can expect to hear a collection of songs from Ridgway's 35-year music career, including some tunes from his pre-solo years.

"Every song is part of a symphony," he said. "I like them all." What he'll play at any given performance is unpredictable, though. "I like to freshen it up."

As for music of yesterday and today, Ridgway's sage advice is "If you have an imagination, use it! People don't stop creating."

Ridgway will take to the stage at 9 p.m. Tickets for the concert ($15) are available at www.thespiritoftheeighties.com.

Ridgway's latest album, "Mr. Trouble," can be purchased on his website, www.stanridgway.com.