It may have started with a handful of Lewiston-Porter High School buddies who graduated together 25 years earlier, but The Spirit of the 80's concert has evolved into an event for everyone - and an opportunity to give back.

Now held in conjunction with the Lewiston Art Festival, the two-day series welcomes music fans of all ages. Above and beyond that, the event has teamed with Music is Art, a nonprofit organization that supports local music programs, to expand young peoples' exposure to different styles and types of music, and encourage them to explore their own creativity.

Local businesses are lending support to the event in other ways, too.

Joe Cecconi's Chrysler Complex is providing transportation for the artists and their crews. Brett's Tent & Awning will once again provide tents, tables and chairs. Niagara Jet Adventures is donating a van to give concertgoers a "safe-n-sober" ride between the villages of Youngstown and Lewiston on Saturday night.

Of course, the Spirit of the 80's is a chance for out-of-towners to reunite.

Frank Scozzafava returns to Lewiston for the event each summer. He said " '80s weekend" (or " '80s week" as some of us have stretched it to) is the perfect time to "keep in touch with the people who helped shape who we are."

Scozzafava attended area schools in the '80s. He founded a rideshare transportation company in Columbia, South Carolina - Scootaway Inc. - which is a sponsor of Spirit of the 80's.

"I still consider friends that I may only see once a year my best friends," Scozzafava said. "It's like time stood still when I'm with them again after all these years."

That is exactly what Spirit of the 80's organizers hoped would happen when they had the idea to create the concert.

The event brings together some of the basement bands that played at high school parties and dances - including The Mirrors.

Formed by L-P classmates Tim Tyran, Kirk Andrews and Mark Acker, the band lasted until shortly after graduation in 1985 when the friends went off to college and moved out of the area. When asked if they would consider reuniting for a hometown show, the three men, now in different states, with different careers - two married, one with children - decided they would get the band back together. They got out the music they hadn't played in 27 years and held band practice via video.

The Mirrors brought back fond memories for many people when they played the inaugural Spirit of the 80's in 2012. They have been back by popular demand every year since.

When asked why they keep traveling back each year and playing for this "one-night-only" show, Tyran, now of Bedford, Texas, said, "We love Lewiston; we love the '80s; and we love performing! We're all professionals now, and this is the one night we get to relive our youth and remember what it was like to be 'almost rock stars.'

"When we play, it's like we never grew up. We are forever young onstage. We are so honored to be a part of this special weekend - to come back home every year and play the songs that take people back to a special place in time.

"I think the Mirrors could have been huge if we had stayed together. It's just so much fun 'keeping the band together,' and I hope it never ends. Every year this gets bigger and better."

Not all concertgoers will be from the area. Our friends to the north have been crossing the border to come to these shows for the past three years. Top acts also are drawing fans from much further away. Just this week, a couple in the Chicago area ordered a pair of tickets. Apparently, they had been considering a trip to Western New York, and learning Stan Ridgway is playing gave them the incentive to book the trip.

There have been similar interactions with purchasers from Syracuse and Toronto. There is another couple coming from Atlanta. They don't have any connections in the area, but are huge Ridgway fans, too.

None of these people attended Lewiston-Porter or know anyone who did. They will visit Lewiston for the first time, book overnight accommodations and eat out.

"This is the kind of economic effect we can continue to expect," Spirit of the 80's Chairman Michael Hanrahan said. "We are introducing people to Lewiston, and new customers to local businesses."

To purchase tickets, or for more information, visit www.theSpiritOfTheEighties.com. 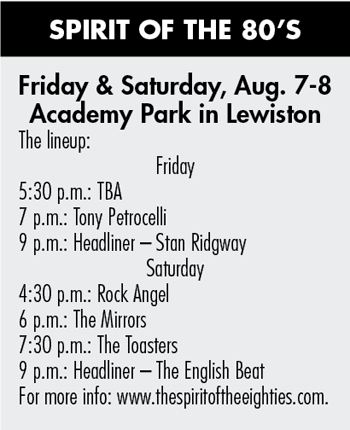