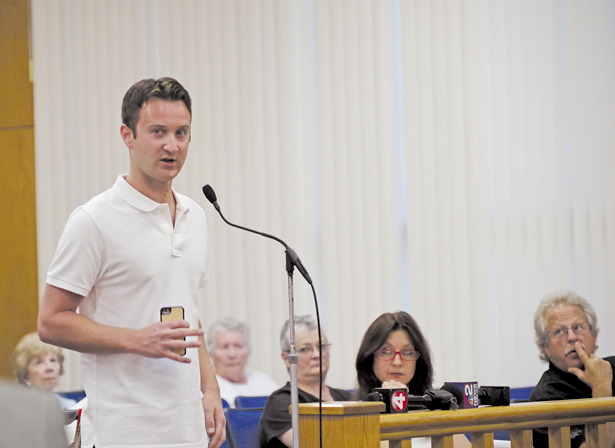 Corey McGowan speaks to the Grand Island Town Board on Monday during a public hearing on the Gus Macker 3-on-3 basketball tournament he has planned for Aug. 29-30. The board approved the event by a 3-1 vote. (Photo by Larry Austin)

•Taken from the July 24 Island Dispatch

Gus Macker basketball tournament organizer Corey McGowan received approval for his event from the Grand Island Town Board on Monday, but not without some anxious moments. Before voting to reaffirm a decision it made in a work session July 8, the board raised more concerns with the tournament and signaled during the meeting that voting for approval that night was no slam dunk.

Following a public hearing, the vote to support the street basketball tournament scheduled for Aug. 29 and 30 passed 3-1 with Councilman Gary Roesch again voting no as he did July 8 and Supervisor Mary Cooke and councilmen Chris Aronica and Ray Billica voting yes.

Before voting, Billica told McGowan the board can't give approval without answers to questions about insurance, security, parking and the overall operational plan, saying "some of that information we don't have back yet," and approval would be putting the cart before the horse.

"Another condition is just another condition. It's more public perception that's just negatively affecting this event," McGowan told the board. He said he addressed all the board's previous conditions, including parking, saying there will be 750 cars maximum and there are over 1,300 spots available.

"No more conditions. I need that approval," McGowan told the board. "The same approval that was voted on in May by all four of you, the same one that was voted on last week by three of you, and all of those conditions have been met. Now we get new conditions that keep getting added to the table. It's nonproductive. I can't keep going back and forth."

Preceding the vote, the board held its first public hearing on the Gus Macker tourney to take citizen input. Opponents of the event went on the offensive.

Bonnie Sciuk asked who will be responsible for cleaning up all the garbage generated from holding the basketball games. "I as a taxpayer refuse to pay 1 cent," she said. She asked about parking and how many peace officers would control the crowd that she estimated would number in the tens of thousands.

Sam Aceti, who owns Aceti's Wine & Spirits in the Tops plaza, also raised questions about the security force for the event, saying Macker security "seems to be inadequate." He also asked about the traffic pattern and a deployment plan for the local police forces, among other questions. Saying he had 15 years experience in the entertainment industry, Aceti commented: "There are too many questions that have not been answered, too many inconsistencies in what is said, written and what is in advertisements." Aceti said if something bad happens, no one will remember the Gus Macker tournament, but would instead remember the "incident on Grand Island."

Kaily Geary said the event may look great on paper, but there were security problems at the Gus Macker in Buffalo when the event was held there.

Grand Island Boulevard business owner Linda Feldman, whose store fronts the location of the street tourney, complained that a section of the boulevard would be shut for the Gus Macker. She said from her research, almost all the other Mackers were in urban hardscapes, or they were in parks, "not closing down central commercial district in a small town like this."

"Having it here in the center of town is not an ideal location, it is restrictive," she said.

Sandra Nelson asked if the Macker is such a wonderful thing, why has it "been turned down" at other venues.

Kurt Villani of Gui's Lumber said the Macker will be good for some people, not good for others. He said his business would be just about shut down for the weekend and the tourney would cause a traffic jam from one end of the boulevard to the other. Villani stressed that he supported sports for youth, and didn't oppose the Macker itself, but asked that it take place in another location, saying, "it's just the wrong spot."

Supporters of the Gus Macker included Cheryl Chamberlain, a teacher at Grand Island High School, who said the "excitement is palpable" at the school, with several players ready to play and others interning or volunteering with running the tourney.

"This is about kids," she said. "This is really about sports."

She said in her experience supervising sporting events there had never been an issue with security.

"Local businesses will flourish," she said of the economic impact of hosting the tourney.

Islander Katie McGowan said negative comments about the Macker were disheartening as people try to attract visitors "trying to promote the Island" with an event like the Macker that is known nationwide.

"You're taking away what these kids really need. They need an outlet," she said.

"I just don't understand why this is taking so long to put this through. It really should be cut and dried. It should be approved," she said.

Corey McGowan called the concerns of others "very relevant, very real." He said the tourney would celebrate its 24th year locally, with 22 years in Buffalo, where it left, he said, because of financial reasons in covering a 4,000-foot area. The GI tourney will take place on a 900-foot stretch of the boulevard with a 500-team cap on teams.

Regarding traffic, McGowan said the more traffic the better, because the Island has bridges, "We don't have a drawbridge."

Islander Trent Gavazzi noted the Macker had restricted alcohol from the event and would be different from past editions.

"It's not going to be the same atmosphere as downtown Buffalo," he said.

"Something like this is needed," he continued. "And let's show off GI." He told business people to take advantage of hosting the Gus Macker and said if the naysayers spent as much time helping as they did trying to stop events, "We'd have a lot more going on. Grand Island's got great potential."

"Look what Lewiston's done with their little village. Grand Island should have something like that," he said.

McGowan issued a press release Thursday that said, "No new conditions were added at Monday's board meeting and tournament organizers are full steam ahead." He said registration to play in the Macker is open until Aug. 17 online at www.macker.com.

He added, "The 2015 Gus Macker on Grand Island will focus on a family-oriented two-day festival that welcomes all ages. All Grand Island businesses are encouraged to participate at the tournament by showcasing their services at the Town Commons all weekend."