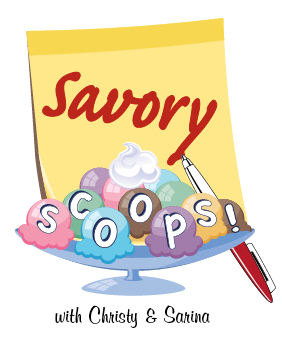 Downtown in the City of Buffalo, food trucks and food lovers swarm the city streets on Tuesday nights for a feast of gigantic proportions. "Food Truck Tuesdays" at Larkin Square has become a Buffalo summer staple bringing together not only the food truck community, but the Buffalo community, as well.

I tackled this food extravaganza to see what the buzz was about and, frankly, I was disappointed and overwhelmed.

I spent last summer in California's Bay Area enjoying sun, beaches and the local food-truck festivals. After those fun summer memories, I was excited to see Buffalo's own take on the mobile-food gatherings. I was met with some pleasant surprises and, sadly, some dissatisfaction that left me discouraged as I left.

As I walked through the crowded square with a few of my friends, I found myself wondering what was actually going on and where the lines began or ended. It was a large, confounding mess of people trying to find their way from truck to truck with the roar of a live band behind them. Each of the aspects of "Food Truck Tuesdays" was great on its own, but together they created an odd and disorganized event.

While it seemed everything was too close together, many of the people did not let the close quarters ruin their fun. With the live band playing and tents with beer and wine available, guests relaxed and enjoyed the warm Buffalo air. People rocked to the music that roared through the event through large speakers strategically placed around the square. Children danced and played on some of the seats and benches scattered through the event.

However, this is where the fun seemed to end. 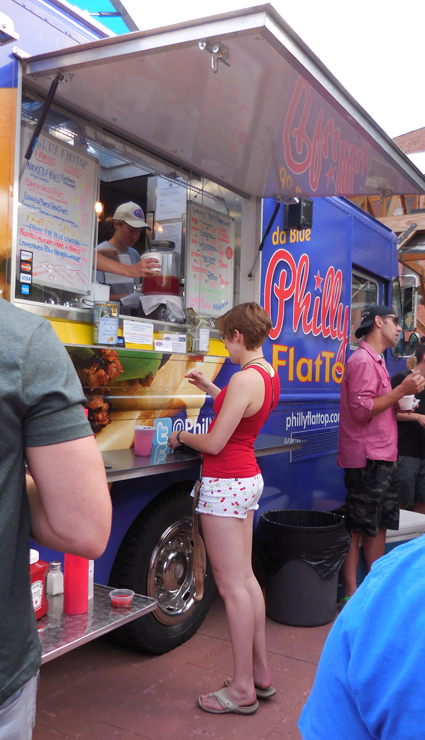 A look at the front of the line of Philly Flattop food truck.

The few patches of grass located throughout the venue were full and people had no place to sit. Some people even opted to leave after buying their food, because there was no seating left.

People constantly bumped into each other and struggled to have conversations within their groups as they waited in endless lines just to get to the truck windows. Complaints of long waits - ranging from 15 to even 40 minutes - echoed through the festival as guests waited in line.

It was not the most entertaining of festivals as I waited through four different lines with my friends. I was less than impressed to see the close quarters the trucks were in. It was also clear to see that with the extensive wait times, I wasn't the only person becoming annoyed. With the echoes of complaints in all of the lines I waited in, as well as a few people I spoke with while delayed, I could tell the people around me were dissatisfied, too.

With the large amount of people at the event, it is easy to become claustrophobic. While this does not bother me personally, I still ended up with an annoyed feeling that dragged on throughout the evening. The small area had the trucks and lines crammed next to each other, creating confusion throughout the event. While the venue is beautiful, I believe it may not be the right venue for an event of this size.

I wanted to try as many food items as I could before the event ended. But with the long wait times at some of the trucks, I was only able to make it to four different eateries during the event's three-hour period (5 until 8 p.m.).

Betty Crockski was the star truck I visited that evening. This truck proudly serves Polish cuisine and offered the shortest wait and friendliest service of the evening. I only waited 16 minutes in line to order my meal, which was the truck's signature sandwich, "The Dyngus," and a choice of a side ($12).

For my accompaniment, I chose from Betty Crockski's selection of pirogies, picking one pork pirogi and one potato pirogi.

"The Dyngus" is a large sausage on a toasted roll with a plum kraut and Betty Crockski's signature mustard. The tanginess of the mustard complemented the smokiness of the sausage and the sweetness of the plum kraut. While extremely messy to eat, this sandwich was delicious from first bite to last.

The potato pirogi was definitely one of my favorite bites of the night. The creaminess of the potato mixture melded well with the spices added to give the pirogi a kick and a second layer of flavor. The pork pirogi was OK, but left much to be desired. It almost seemed to be too doughy and as if Betty Crockski attempted to put pulled pork filling into the center. 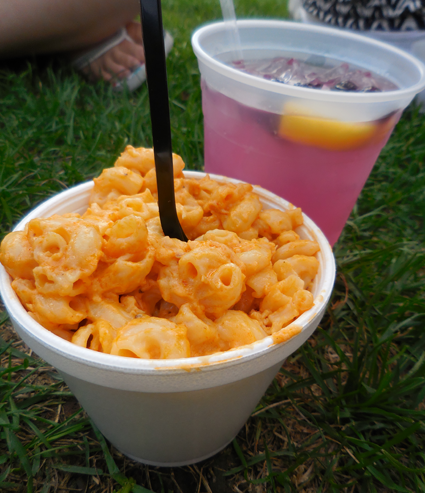 Next up was Philly Flattop, my second favorite stop of the night. With a large variety of Philly cheesesteak sandwiches and innovative sides, this truck had the second-shortest wait time of 18 minutes and good enough service to help balance the boring wait. With a decent variety on the truck's menu, made of four types of sandwiches, two types of meal specials and three sides, there were many options to choose from.

At first, the line seemed to go on forever, but Philly Flattop hit a groove and orders began to move quickly as I waited. Upon arriving to the counter, my friend and I ordered the Buffalo Mac n Cheese ($6) to share and Philly Flattop's signature Blueberry Lavender Lemonade ($4). The Buffalo Mac n Cheese was velvety with the perfect amount of cheese - not becoming too gritty or too gooey, but holding the perfectly cooked macaroni in place. The slight heat from hot sauce added a subtle, but enjoyable flavor with building warmth after each fork-full. The Blueberry Lavender Lemonade was not overly sweet and had a great appearance with frozen blueberries mixed in with the ice to keep the drink cool. Although I wished there could be more lavender, the drink was refreshing and complemented the dish well.

Shortly after leaving Philly Flattop, I was able to get in line with my friend for the (716) Club House food truck. Unfortunately, this was the second-longest wait of the evening with a 20-minute wait time to just order and an additional eight-minute wait to get the food. By the time my friend and I had reached the window, it was 15 minutes in and we were told by the staff it needed five minutes to catch up with the previous amount of orders.

While there, I was able to get a good look at the truck's menu board. This particular truck took advantage of the metal siding and created a menu board out of magnetic strips that made it easy to adjust to each event or if an item had been sold out. 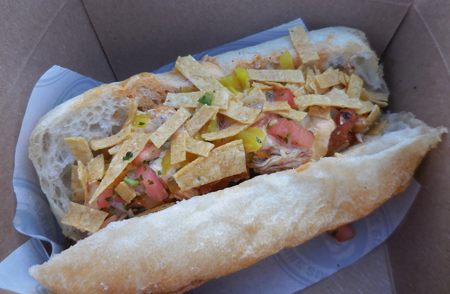 After our wait, we decided on the Chicken Nacho Hoagie sandwich ($8.75) and a can of Loganberry ($2) to round out the meal. The sandwich was delicious and had a nice amount of spice - not overly spicy. The hoagie roll ended up becoming soggy extremely quickly from the juicy chicken and nacho sauce that was drizzled over top. It ended up breaking and falling out of the bottom, creating a gooey mess in the container it came in. The Loganberry's sweet but tart taste complimented the spicy flavors of the sandwich.

At the end of the visit, I got in line for the last truck of the night, Amy's Truck. This was the most disappointing truck of the evening. In order to find the end of the line, I needed to weave through the lines of four different trucks, ask if I was in the correct line and then wait 32 minutes in line to just reach the window. After watching eight groups of people leave the line and hearing numerous complaints made at the window, it was clear to see I wasn't the only one unimpressed.

While my friends and I waited, people began to leave the line due to the long wait. When we finally neared the window, I noticed the staff would take a person's order and then have the guest wait there and receive his purchase before taking the next order. When I did get to the window, the server apologized for the long wait and took our order. Within five minutes, I was finally walking away with my meal. 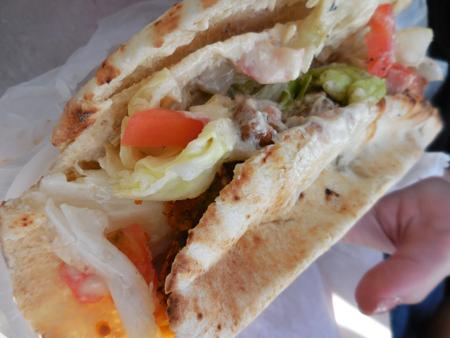 My friends and I ended up ordering the Falafel Sandwich ($7) and the Anne Kebabs ($8). The Falafel Sandwich was good, having a nice texture provided by the crunchy falafel, the fresh vegetables and the creaminess of the seasoned mayo all wrapped within a warm pita. While the sandwich was decent, it needed a second element of flavor. If a little bit more spice had been added to the mayo, the dish would have taken on another layer of flavor and made a good sandwich into a great one.

The Anne Kebab was a pita filled with chunks of chicken accented with feta, tomatoes and hummus. It, too, was good sandwich, however it suffered from poor construction. While it had a great balance of flavors, it seemed all of the hummus had shifted to one end of the sandwich. That made the last few bites of the sandwich overpowered with hummus and masked the rest of the delicious flavors.

The food we were able to taste had an extremely respectable variety of flavors. Going to Larkin Square, it is possible to get a bite from every type of food known and loved by man. But, with an average wait time of 25 minutes, I would much rather go onto the social media pages of the trucks and track them down rather than return to Larkin Square.

While the food was extremely good, the exhaustingly long wait times and the disorganized layout of the event was a complete turn off. With a little bit of work and more experience under its belt, Larkin Square's "Food Truck Tuesdays" event has the potential to take off and become a strong community-building staple in downtown Buffalo.

For these reasons, I give Food Truck Tuesdays at Larkin Square a 2 1/2 out of 5 stars. I give the trucks 4 out of 5 stars and plan to visit them in the near future.

I hope that if and when I go back to Larkin Square, changes will have been made to this promising event to help make the experience more enjoyable.