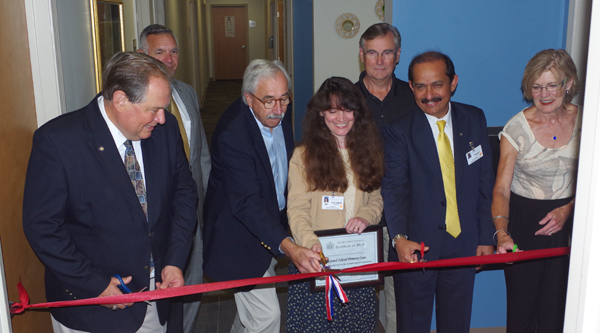 •Taken from the July 17 Island Dispatch

Called the most comprehensive provider of medical services on Grand Island, the new Grand Island Primary Care Center celebrated a ribbon-cutting Thursday at its offices at 2608 Grand Island Blvd.

Members of the Grand Island business community and leaders in government were on hand for an unveiling, and to welcome back the doctors and staff who had moved temporarily to North Tonawanda for several months as the new offices were prepared. The new offices are adjacent to Rocky's Island Pizza.

"As I was correcting his last name on the sign, it occurred to me that even this mistake has a deep meaning. Dr. Ruth is the root of health and wellness of all people on Grand Island," Chadha said. "The tree stands strong not by the fruits or branches, but by the depth of the roots. A tree without roots is just a piece of wood. Won't stand. And we wouldn't be standing here without the commitment and the dedication of Dr. Ruth."

"Things get done in the world by people who care, who try, and who give their best in whatever they do," he said. "And that's the Dr. Ruth I know."

Chadha said the vision of Memorial is to expand the scope of services on the Island, such as adding bariatric services counsels and psychiatry services to the practice.

She called Dr. Ruth "a legend on Grand Island" and said welcoming him back on the Island with an expansion is "just a wonderful thing."

New York State Assemblyman John Ceretto presented a certificate of merit from himself and the Assembly at the ribbon-cutting.

Memorial's Pat Bradley said he was impressed with "how loyal the patients of this office have remained," calling them patient and supportive.

"I think we have one of the best staffs ever," Ruth said. "Our staff is loyal. A lot of them have been with us a long time."