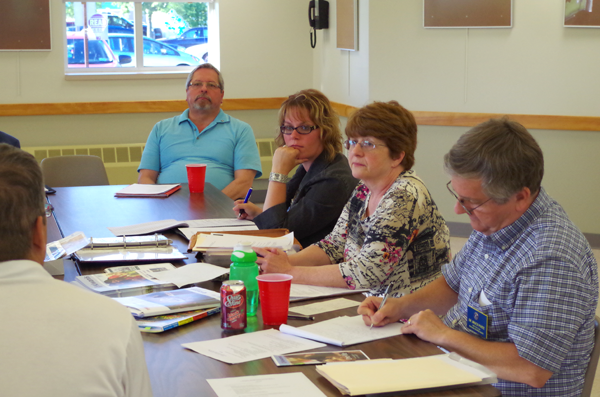 Members of the Kiwanis Club meet June 16 at Grand Island Memorial Library to lay the foundation for an Island chapter. Another meeting is scheduled for Tuesday. (Photo by Larry Austin)

•Taken from the July 17 Island Dispatch

A new Kiwanis Club of Grand Island could be operating by this fall.

Anyone interested in joining the service club is invited to attend a bylaws meeting at 6:15 p.m. Tuesday, July 21, at the Grand Island Library.

Diane Hoffman Privetz, current lieutenant governor for the eight Kiwanis clubs in the Niagara Frontier North Division, has been doing all the legwork to get the new club off the ground this year, according to Susan Smith, lieutenant governor designate.

"We've been working on this for several years. It looks like it actually is going to happen before September," Smith said.

To become chartered as the ninth Kiwanis Club in the division, 15 members need to be signed up. As of earlier this week, 10 people have indicated interest, she said.

A primary focus of Kiwanis is service to children, Smith said, "but it's anything the community needs that we can do to help."

The Grand Island community is known for its caring, with a number of service clubs and church organizations already active and involving residents, such as the Moose, Zonta, Rotary, Lions, Grand Island Professional Women and Knights of Columbus.

Two Island businessmen who have already signed up for Kiwanis believe there is room for one more Island organization.

Fahim Mojawalla, owner of the Island Ship Center, said he was approached about joining Kiwanis last month and decided that if the new group was started on the Island, he would be a part of it.

"We're a community business," he said. "My business is based
on doing good things for the community."

He pointed out that he recently read that Grand Island is one of two zip codes that are growing in Western New York, so he doesn't think adding a club that desires to serve the community will be a problem.

"There is more to be done with collaboration than with competition," he said.

There is always room for more, according to Jon Bondi, owner of the Baked Cupcakery. "I think Grand Island can support whatever it chooses to ... (with the Kiwanis) there is no obligation other than to help."

Bondi said he signed up when Hoffman Privetz contacted him and he heard that Kiwanis would be involved with helping Island children.

"Any time you can help kids, especially kids that might need it more than others, I will, in my position as a business owner, do whatever I can," he said.

The Kiwanis Club will be open to all ages and Island residency is not required. The new group could work hand-in-hand with other Island groups, according to Smith.

"I don't think it will take away from what's already being done. It's not going to drain from other groups," Smith said. "I feel there is a lot of benefit (with Kiwanis) to Grand Island."