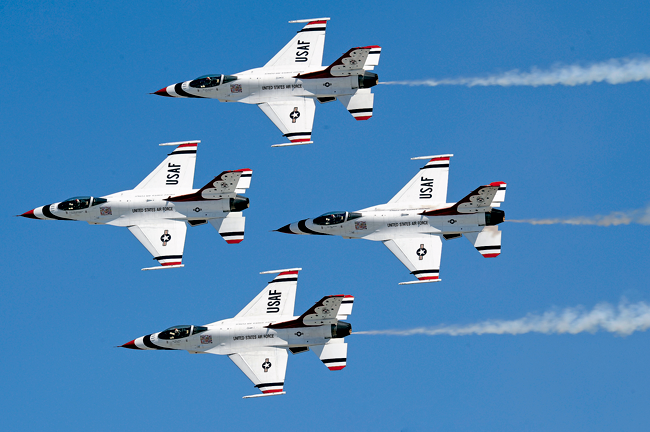 The U.S. Air Force Thunderbirds will perform July 18 and 19 at the Thunder of Niagara air show. (Photo courtesy of the USAF Thunderbirds)

When the Thunder of Niagara air show kicks off July 18 and 19 at the Niagara Falls Air Reserve Station, it will be more than just two days of airborne performers and ground displays.

It will be a gift of thanks to Western New York.

"Anytime we do an air show, we come up with a theme," said U.S. Air Force Maj. Ben Canetti, air show director. "This year we decided to go with a theme of a salute to Western New York. Our base here gets more support than any other base in the country.

"This is our way of giving back to the community, by putting on the best air show we possibly can."

The Thunder of Niagara Air Show is presented by the 914th Airlift Wing, 107th Airlift Wing and the Niagara Military Affairs Council. Personnel will also present awards Saturday and Sunday mornings to various individuals, nonprofits and local businesses that have supported the base.

In addition, personnel will also dedicate a C-130 aircraft to the community. It will be emblazoned "The Spirit of WNY" — with the logos of the Bills and Sabres on the tail, Canetti said.

"It's going to look pretty cool," he said.

Gates will open at 9 a.m. both days, with aircraft taking to the sky about 11 a.m. Admission and parking are free. Canetti strongly encourages those planning to attend the show to go to the website at www.thunderofniagara.com and look at the frequently asked questions section. He noted that security will be similar to that at an airport. 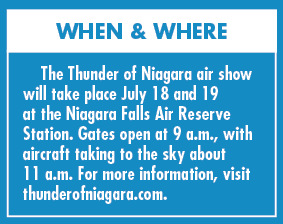 Small purses, fanny packs, small camera bags or small diaper bags (if accompanying a child) are permitted, but will be inspected, as will folding chairs. Larger bags or coolers are not permitted. Security checks with metal detectors will take place at all entrances.

A number of agencies, including Allpro Parking, will be assisting with parking this year and many law enforcement agencies will help with traffic control, Canetti said.

"That being said, people should leave (home) early," he said, noting that 150,000 people are expected over the course of the weekend.

A highlight of the weekend will be the U.S. Air Force Thunderbirds and their precision formation flying and solo routines in F-16 Fighting Falcons.

Performers will also include the Golden Knights of the U.S. Army Parachute Team and the Wounded Warrior flight team, which aims to draw awareness to the plight of returning wounded veterans.

Canetti said there will also be a focus on "what we call warbirds, World War II, Korea-, Vietnam-era performers and static displays." He cited the "Quick Silver" P-51D Mustang as the "rock star of World War II," and a C-47 Skytrain, which will be on display on the ground.

Another big highlight, Canetti said, will be a performance by the U.S. Marine Corp. Harrier demonstration team. The USMC AV-8B Harrier is capable of vertical take-off and landing.

"Not too many people get to see that," he said. "The Marines are only doing eight shows in the world, and we're one of the eight."

There are many more performers and ground displays planned for July 18 and 19. A closed event for family, sponsors and media will take place July 17, during which Rex Ryan, the new head coach of the Buffalo Bills, will be making a tandem skydive with the Army Golden Knights.

"It's kind of exciting; he's like a kid about this," Canetti said. "I think he's a little bit of an adrenaline junkie like the rest of us."

This is Canetti's sixth air show and his second time as director. He grew up in Alden, but said he didn't even know there was a base in Western New York ... until he was sworn into the U.S. Air Force at the air show there in 1992.

"I was amazed by that air show," he recalled. "I never thought 23 years later, I'd be running it."

This is the first air show at the base since 2011. The schedule depends on deployments and financial constraints, but things finally worked out for 2015, Canetti said. 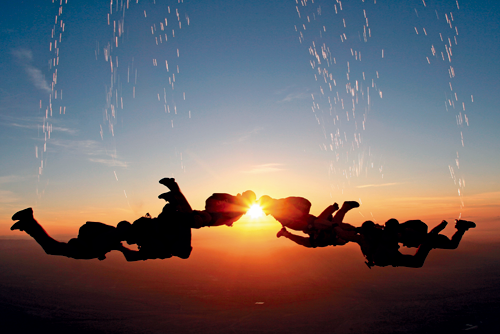 The U.S. Army Parachute Team Golden Knights will appear at the Thunder of Niagara air show. (Photo courtesy of the Golden Knights)