By Michael and Deborah Billoni

As the sun began its decent for a magnificent sunset over Lake Erie on the Fourth of July, Mark Jerge stood on the roof party deck at Templeton Landing and watched his boss, Russell J. Salvatore, personally inspect the buffet line before his more than 300 guests made their way through the four lines.

"There is no greater restaurateur than Russell J. Salvatore," Jerge said of the 82-years-young founder and owner of Russell's Steaks Chops & More and Salvatore's Grand Hotel on Transit Road in Williamsville. "He is making sure everything is perfect for his guests."

"Russell loves nothing more than to see his friends have a great time. He circles July 4 on his calendar every year to give them that opportunity," Jerge said. 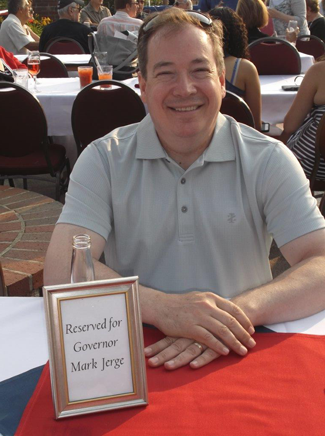 The Buffalo and Western New York community has two great events downtown to celebrate Independence Day each year. On July 3, the Buffalo Bisons and KeyBank host the annual Independence Day Eve fireworks show after a Bisons game and patriotic concert by the Buffalo Philharmonic Orchestra. Buffalo's official Fourth of July Celebration is held at Canalside, and this year nearly 40,000 people enjoyed both shows.

Salvatore loves America, and nobody celebrates our nation's birthday better than he does. Years ago, he sponsored Buffalo's July 4 fireworks show in Delaware Park. This year marked his second straight year of sponsoring an even greater fireworks display at Canalside. He also purchased 2,500 American flags that were distributed to guests entering Canalside that evening.

While more than 20,000 people filled Canalside, hundreds more were in their boats and the Liberty Hound Restaurant was hosting a fireworks viewing party for hundreds on the fantail of the USS Little Rock at the Buffalo and Erie County Naval & Military Park. Salvatore hosted an annual party on the roof at Templeton Landing where more than 300 of his closest friends enjoyed an exquisite buffet that featured jumbo shrimp, macaroni and peas and breaded chicken cutlets prepared by Salvatore; a variety of pizzas from the Digiore family of Santora's and Picasso's Pizzeria; roast beef on weck; and salad. Beverages were available all night, and 97 Rock's DJ Jickster spun the tunes that kept the dance floor busy until the fireworks began at 10.

In addition to funding the fireworks show at Canalside, Salvatore created a 30-minute tape of patriotic music to accompany the pyrotechnic show. He also bought time on Mix 96.1-FM so the music could be played at 10 p.m. for those who could not see a fireworks show. 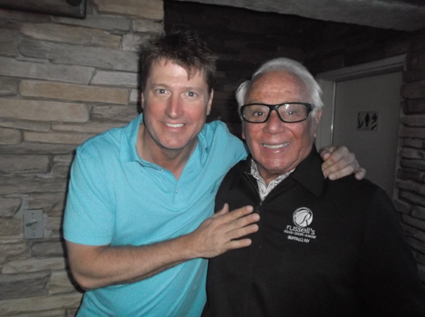 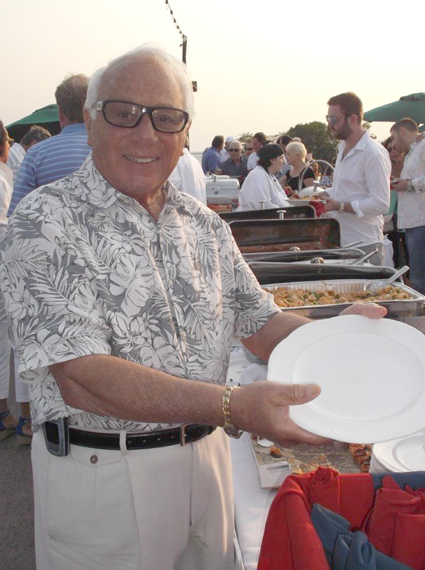 "I love to see people have a great time, and there is no better way to celebrate our nation's birthday than by having a tremendous fireworks display," said Salvatore, who joined Empire State Development Regional President Sam Hoyt and state Sen. Tim Kennedy on the stage at Canalside to thank the crowd before the fireworks show. "I love seeing the thousands of faces turned upward as the fireworks blast off and fill the sky with color."

"Russell is an American icon, because he started a business with very little as a teenager and look at what he has now," Jickster said. "It's the American dream. He has made it and he is now a pillar of our community who is not afraid to give back."

When Russell built his new restaurant and hotel a few years ago, his Russell J. Salvatore Foundation created the Heroes and Patriots Park on a piece of land in front of the hotel. The unique park was created through Russell's vision and the creative ability of his long-time friend, Don Parrino, a professional designer and artist for 55 years who has designed and built more than 100 hotels, restaurants and banquet halls - including Salvatore's initial venture, Salvatore's Italian Gardens.

In Heroes and Patriots Park, Parrino created, sculpted and built a monument for the 911 tragedy in New York City and a monument to the Flight 3407 plane crash in Clarence with "the Phoenix carrying the airplane up to heaven," he said. When an Erie County Sherriff's Department horse died, Salvatore purchased a new one for the unit, and Parrino built a horse monument for the park, along with a statue of Russell at the entrance and St. Michael the Archangel, the patron saint of law enforcement. Last year, Parrino created an amazing display of the Battle of the Bulge from World War II, including a tank he built from scratch.

Salvatore and Parrino are currently working on their greatest display, which should be completed by early August: "America - The Land We Love From Sea to Shining Sea." This incredible display includes replicas of the Statue of Liberty, the United States Capital, Niagara Falls, the Washington Monument, the Golden Gate Bridge, the Empire State Building and the George Washington Monument. 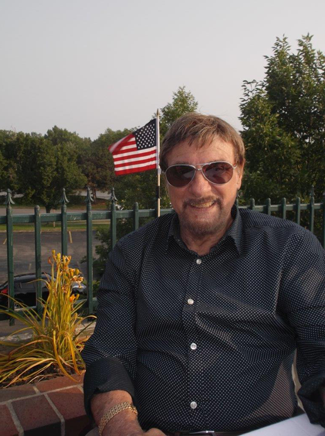 "To me, Russell has always wanted to be No. 1 in everything he has done," Parrino said. "I present a rendering to him and, in a couple of days, it is completed. I have never met anyone with such a vision. It is an honor to call him my friend."

Parrino's son-in-law, Tony Vitello, the executive chef at the Buffalo Yacht Club, who has been in the restaurant business for over 30 years, added, "Where else would you want to be on July 4 than at Russ Salvatore's party? He has always thrown the best parties in WNY, and look at tonight with the most beautiful sunset ever. It just doesn't get any better than this."

If you have not been to Canalside to experience our refurbished waterfront, you and your family must visit for a tremendous experience.

During the day on July 4, Canalside had musical entertainment all day, activities for the kids and a variety of food choices with the food trucks. Andrew Pacer, 22, in his first season as an event coordinator for Canalside, was assigned to a children's area where a variety of outdoor games were scattered about to keep the kids occupied. 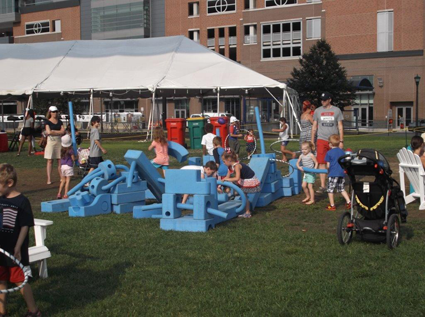 "Canalside is building a great energy. We have something going on every minute of every day, seven days a week from May through September," said Pacer, a West Seneca resident who graduated this year from The Crane School of Music with a bachelor's degree in the business of music. He is putting his degree to work each Friday beginning at 5:30 p.m. when Canalside hosts "Battle of Local Bands" on the bridge facing the canals. The winners each week will open for the headliner of Thursday's concert series.

The holiday celebration began at Coca-Cola Field on Friday evening as a near-sellout crowd of 17,112 cheered loudly throughout an exciting 8-4 Bisons victory over the Syracuse Chiefs (marking only the eighth time in 21 seasons of July 3 celebrations the home team won). Prior to the game, Buffalo Mayor Byron W. Brown was on the field to present a proclamation and announce it was "Conductor Paul Ferington Day in Buffalo and Erie County." The BPO maestro was honored for his 19 years of planning and conducting the Independence Eve concert.

The first pitch to start the game was thrown by the son of the late Frank Mooney, a former Navy Frogman (which later became the Navy Seals) who retired from the Ford plant in Lakeview and worked as a ticket salesman for the Bisons for more than 20 years. Mooney died last month at 92.

The Bison organization, led by owners Bob and Mindy Rich, and ably run by President of Rich Baseball Operations Jonathan A. Dandes, Vice President and General Manager Mike Buczkowski, Director of Stadium Operations Tom Sciarrino and their staffs. Their in-game and postgame production was big league and they do a spectacular job with the "Big Board" in dead center field.

Before the Buffalo Philharmonic Orchestra and Chorus began, Ferington was once again honored, this time by Dandes and Buczkowski on behalf of the Rich family, the Bison organization and its fans. They presented the talented conductor with a beautiful photo of him in action at a July 3 game with his orchestra and fireworks. The team will mount a plaque in Ferington's honor in the spot from which he conducts the annual concert naming him "Forever, The Maestro of Coca Cola Field." 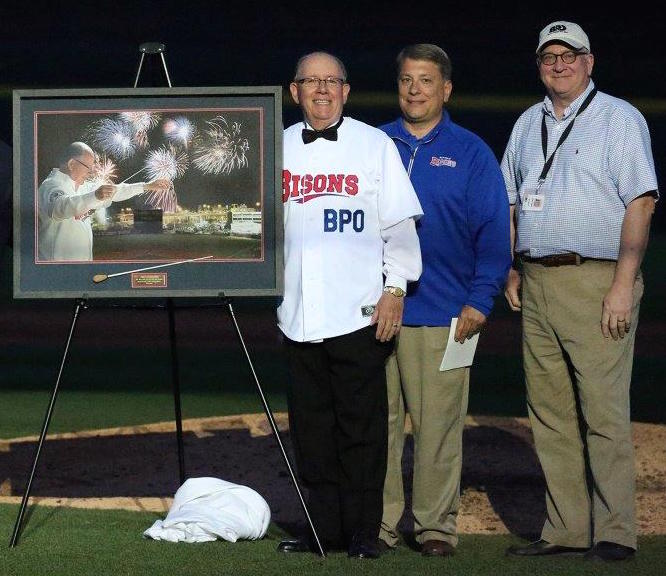 Upon receiving the honors, the conductor humbly said, "Life does not get any better than this. Thank you. I love you all, and happy birthday America."

The BPO performed an 11-selection concert with the accompaniment of appropriate video on the board and, at times, animated acts on the field with the mascots and others. Overall, it was a big league, patriotic event.

Dr. John B. Long of the Town of Tonawanda, who was drafted into the United States Army right out of East High School in 1945 and earned the position of staff sergeant, attended the game, concert and fireworks display with Marina Woolcock, a member of the Naval & Military Park's board of directors.

He said, "During the opening presentation of the BPO concert, when they paid tribute to WWII veterans, that was particularly real to me. A sign on the big scoreboard read, 'Don't forget Pearl Harbor.' It was an important reminder that the battles and events of that war are among the most dramatic in history and, during the concert, I remembered Pearl Harbor and what it meant to my generation. I was reminded, again, that I could watch a baseball game and enjoy our freedoms."

One of the most significant parts of the concert is when the BPO performs The Armed Forces Salute and recognizes those who served in any of the five branches of service. As they played the theme from each branch, members of that branch would march to home plate from centerfield while fans who served in that branch stood to an appreciative applause from the crowd.

Philip Marconi, who recently served in the United States Marines, stood at attention during the ceremony. "I love America; I love baseball; and I give thanks for this wonderful tribute to the men and women who sacrificed their lives for our freedom as Americans," he said afterward.

His girlfriend, Lindsay Amico, whose father, Kurt, is president and owner of Mid City Office Furniture, added, "To me - I am dating someone who was a Marine, and my father is an Army veteran - it is just wonderful to celebrate our freedom as Americans with the world-class Buffalo Philharmonic Orchestra."

Attending his first BPO July 3 event was Jake George, 17, a baseball player from North Java who is entering his senior year at Attica High School. His father is Trace George, founder and owner of The VSP Graphics Marketing Group, the official graphics designers of the Buffalo Bills, Sabres and HARBORCENTER. They also wrap vehicles with logos, etc., including Bills' coach Rex Ryan's new truck.

"This was such a special event for us to witness," Jake said. "It reinforced for me why I am proud to be an American."

His mom, Tammy, said, "This was just a fun-filled, pleasant, touching and patriotic night out with our family. It's great to be an American."

A thought echoed by so many over the Independence Day holiday in WNY and across America. 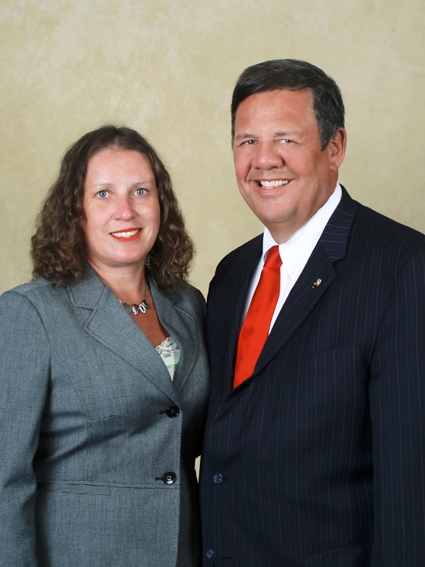 Michael J. Billoni is an award-winning sports writer and reporter. His work has appeared in the Tonawanda News, Buffalo Courier-Express and the Rochester Democrat & Chronicle. He is also the former vice president/general manager of the Buffalo Bisons and Rich Baseball Operations. Mike is a freelance writer for Niagara Frontier Publications. He can be reached at [email protected]. Deborah Billoni is the director of finance and operations at the International Institute of Buffalo. She can be reached at [email protected].