Series returns with new episodes Thursdays at 9 p.m. on FOX

'Wayward Pines': What You Need To Know

Based on Blake Crouch's international best-selling series of books and brought to life by suspenseful storyteller M. Night Shyamalan, "Wayward Pines" stars Academy Award nominee Matt Dillon as a Secret Service agent (Ethan Burke) on a mission to find two missing federal agents. On his way to Idaho, he crashes and lands in a hospital - where he's the only patient. From there, Ethan discovers he's in a place he can't leave - and the residents are, well, odd, to say the least.

Ethan's investigation only turns up more questions. But each question leads him to the most important question of all: What's wrong with Wayward Pines?

If you're a few episodes behind ...

In a mind-bending twist, residents of the town are living in the year 4028 and the future of Wayward Pines rests with the "first generation" of children, including Ethan's son, Ben (Charlie Tahan).

Dr. Jenkins/David Pilcher (Toby Jones) is the man behind the madness, who knew humans were doomed to de-volve, genetically changing into bloodthirsty aberrations, or "Abbies." In an attempt to save an all-but-extinct humanity, he handpicked people he wanted to keep alive to further the species, and created the eerie utopia of Wayward Pines.

In the next all-new episode, "Choices," airing tonight (9 p.m.), Ethan gets a tour of the facility and learns more about the history of Wayward Pines and how its residents ended up in the town.

As the season continues, prepare to learn even more of the secrets behind Wayward Pines. In the all-new "Betrayal," airing Thursday, July 2, Ethan finds a bomb planted in his car, which makes him question people whom he thought he could trust. In the all-new "The Friendliest Place on Earth," airing Thursday, July 9, an explosion on Main Street leaves two key residents of Wayward Pines in critical condition, and Ethan is determined to find out who is responsible for the horrific act. 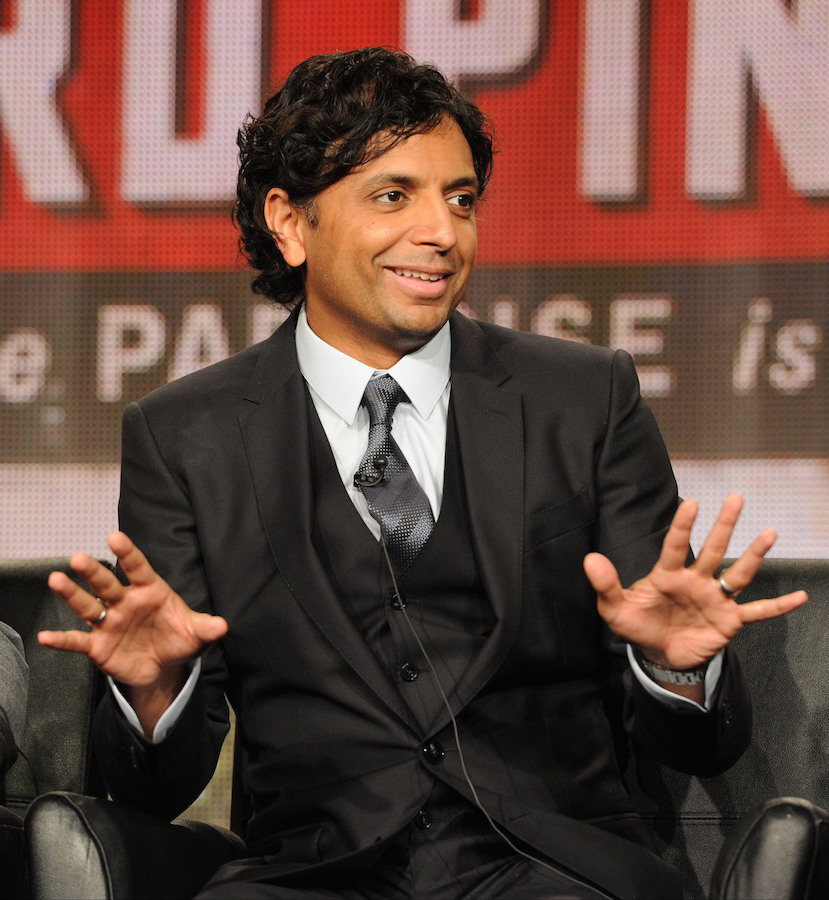 While M. Night Shyamalan's stories are varied - from a boy who sees dead people ("The Sixth Sense") to a faux superhero ("Unbreakable"), a mysterious, sheltered community ("The Village") to a far-off sci-fi future filled with "Abbies" ("Wayward Pines") - there is one big constant: At some point, each tale will have a shocking twist.

No one does jaw-dropping, head-scratching, "Wait, did that just happen?" better than Shyamalan. But it's not something the Oscar-nominated triphenate (writer-director-producer) sets out to create.

Rather, Shyamalan said the plot turns and reveals are a byproduct of good storytelling.

"It is all a continuation of character's awareness for me," he said. "If I put myself in the shoes of a main character and that person is learning more about their world - more about their situation - that feels very organic to me. 'Things aren't right, I'm feeling clouded, obscured. I'm feeling, like, suffocated - "Why, why, why," ' and getting those answers feels very organic.

"It's an increasing of our main character's knowledge. Are they ready for that? Did they misunderstand something fundamental? When I think of it more from the character's perspective, it feels much more exciting for me to tell these stories, because then what my job is as the storyteller is to make you in sync with the main character so that your misunderstanding is the same as theirs, and every piece of information that they have, you have, and you've misunderstood it the exact same way. Then when it comes, it should've been inevitable in retrospect."

On "Wayward Pines," the biggest surprise so far isn't necessarily the Noah's Ark-like setting, the monstrous "Abbies" or the 2,000-year time jump - though each was very cool - but rather the number of A-list actors who were killed off early into the 10-episode, limited-run series. Most notably, Oscar nominees Juliette Lewis and Terrance Howard were among the early offings.

"(Laughs) I'll be honest, there were a couple of conversations where they were begging to live a little longer and I was like, 'Man, I'm sorry. This is "Wayward Pines," this sh** happens. I'm sorry,' " Shyamalan said. "It was hilarious conversations - and they even pitched me stuff: 'Maybe I'm not really dead and I got severely hurt and I can get back up again.' Then I was like, 'Maybe, maybe. Let me think about it.' "

Actors who are more concerned about the story than their own involvement? Now, that's shocking.

"Really, it's funny; I feel very tied to all of them in almost an equal way. Even if they were in three episodes or four episodes or all 10 episodes, they feel very attached to the piece," Shyamalan said. "It's strange - even Juliette, for example, feels so embedded in the whole piece, and she feels, from her point of view, as well, very committed to it."

Catch up on the first five episodes of "Wayward Pines" now on FOX NOW, FOX.com and HULU.com. Fans also can catch up on FOX ON DEMAND, available via most pay-TV providers.