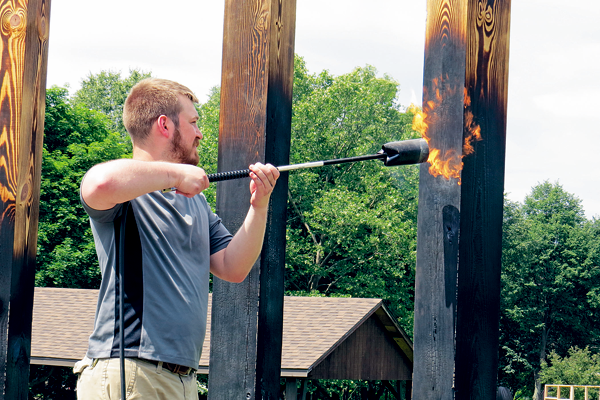 Chicago's Ryan Pechnick torches his beams. "I'm making a large sculptural structure using wood, and then flamed, in a semi-circle," he said. "It's about the materiality of wood and the beauty that can come through the simplest of materials - (through) a simple process."

Artpark is putting the art back in the park

An empty Airstream is parked on the grass just past the Artpark box office.

A faux radio tower was hoisted up near the walkway.

Pillars of wood were set ablaze.

Random people have been seen wandering in the woods.

No, this isn't a zombie movie; it's a trip down memory lane.

For the past three weeks, five grad students from five colleges have been working on the installation of five different outdoor art projects around the Village of Lewiston's state park.

"Historically, Artpark really was sort of a playground for artists," said Tanis Winslow, Artpark & Company's director of visual arts and family programs. "There was new, emerging, fun, creative, interactive, large-scale outdoor art happening. It was all cutting-edge. It was all new and exciting. In a lot of cases, it was from people whose careers were just starting out - it was sort of like a launching pad for a lot of really great artists."

Last year, Winslow had an idea to start a program at Artpark for students pursuing a master of fine arts.

"We thought to ourselves, 'Where does new, cutting-edge art come from? And who are the people making that art? And where is emerging art coming from?' And we said, 'Well, it's coming from the artists at grad schools,' " she said. "We thought that it would be a really great idea to start this residency with all these art schools coming together and having a student from each school make art."

Winslow presented the idea to Artpark & Company President George Osborne and members of the venue's board.

"Everybody agreed that it would be a good idea," she said.

These works are now on display for the public to peruse all summer long.

"I'd really like for it to be the birth of something really great and fantastic here at Artpark," she added.

While there's no zombie movie, Sellinger, of Woodstock, does have a film playing inside a trailer filled with odd milk crates, a 1960s-era lawn chair and what she called "strange memorabilia." 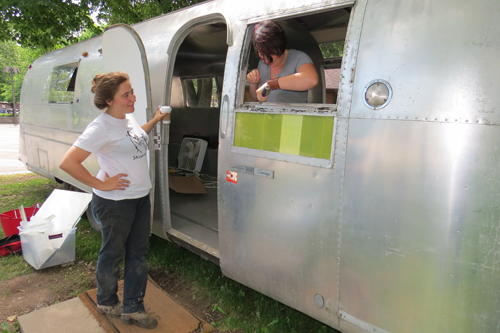 "I'm working on the restoration of a 1968 Airstream trailer, and I'm turning it into a video gallery for this video project that I've been working on using overflowing soft-serve ice cream machine," Sellinger said.

"I was interested in figuring out a more interesting way of displaying a video or having people watch video than just have it on a monitor at a gallery," she explained. "There's something exciting about switching it up and seeing how people would react to a video displayed on a loop, like, in some weird trailer in a park. It feels a little more exciting; a little more surprising."

Also exhilarating was the opportunity to work at Artpark.

"I knew about the (art) program from its early days in the '70s and '80s," Sellinger said. "It kind of fell off the radar for a little bit, so it was kind of exciting to hear about a new resurgence."

Though the works weren't finished until Friday, members of the public were eager to get a sneak peak of the artists at work.

"People are curious and they're interested," Winslow said. "They're very excited. I've seen a lot of the folks walking through the park looking for the artists."

Winslow explored the park and its art as a child in the 1980s. She said the current vibe around the park is reminiscent of that atmosphere of energy and creativity.

All projects were scheduled to be completed prior to a reception Friday night at Artpark.

Artpark & Company has posted a map of the outdoor art pieces online at www.artpark.net. There is no fee to view, explore or enter (where applicable) the works. 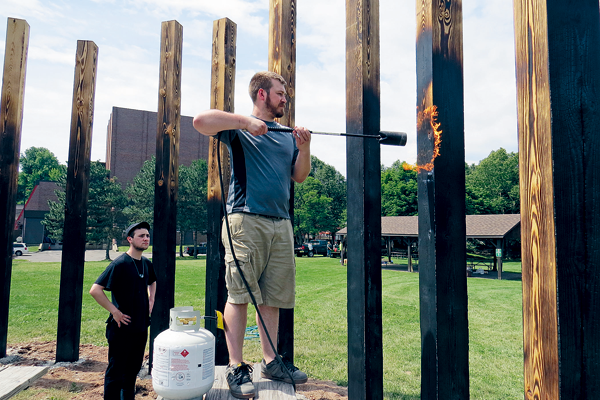