A wild and adventurous new restaurant has come to Niagara Falls. Rainforest Cafe opened its doors to the public earlier this month. I recently decided to venture forth through the indoor jungle in search of an appetizing meal.

Rainforest Cafe was bursting with all sorts of sights and sounds, such as tropical music and elephant roars. Hotel patrons who walked by the magnificently crafted entryway, with its large, stone elephant head carvings and tiki torches, could not help but be drawn like a moth to a flame into the restaurant. Children's eyes were glued to the ceiling where electronic birds and monkeys frolicked while the tour guides (hostesses) directed families to their tables.

At the very center of the restaurant is a display that houses a tiger family. The male tiger lets out a roar every 15 minutes to signal a thunderstorm is arriving. The thunderstorm is simulated by the dimming of lights in the restaurant, and a mini-misting machine, hidden around the table, coating families in a light mist. Lightning and thunder effects go off and captivate the younger audience. Toward the back of the restaurant is a giant saltwater aquarium that houses fish similar to those seen in "Finding Nemo." 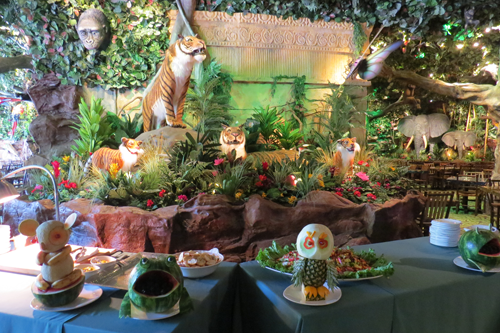 The tour guides stress restaurant patrons are allowed to walk around and view more of the building. This can be awkward for those eating near the tiger or aquarium displays, because tourists like to get as close as possible to them for picture-taking purposes.

With all the sights and sounds included in the small attractions, the restaurant experience borders on overstimulation. But, the bells and whistles help pass the time while waiting for food to arrive.

Because it was the opening week for Rainforest Cafe, there was no doubt the staff was a bit overwhelmed. It seemed as though the staff was swamped with customers whereas the customers were overcome with the atmosphere of the restaurant.

The wait time for a table was 30 minutes, which, for opening weekend, is understandable. Upon being seated, the waitress came over and showed my three guests and I the different types of drinks, both alcoholic and nonalcoholic, that were available.

The waitress was very knowledgeable about the drink menu. She was very keen on us ordering the specialty glass drinks. An alcoholic beverage in a regular glass is $8.99, but for $13.99 that alcoholic beverage can be brought in a Rainforest Cafe souvenir glass, which can be kept after the meal is over.

One guest and I selected water based on personal preference, while the other two guests selected the Mongoose Mai Tai ($13.99) and a Coors Light ($13.99).

As for the food menu, the waitress did not recommend any dishes or alert us of any possible food allergies. She seemed a bit frazzled and twice forgot to bring my guests and me straws for our beverages. It seemed she was new to working in this type of environment, which could've attributed to her stressful first day. The waitress also was slow to clear our dirty plates away at the end of the meal. They stayed on the table for 15 minutes.

The kitchen staff was dodgy. We asked our waitress to bring an appetizer - one guest's meal - with the rest of our meals. She wrote this down, but the appetizer was still brought out 20 minutes before the other meals. That hiccup was to blame on the kitchen staff; they did not read the note, according to the waitress.

My guest was disgruntled. Another flop we experienced with the kitchen staff was that it forgot to bring out the warm tortillas with one guest's meal. We waited for the rest of his meal to arrive before we began eating.

With busier days to come for the Rainforest Cafe, the wait staff and kitchen staff have much to improve on before they are ready to tackle the busy summer to come. 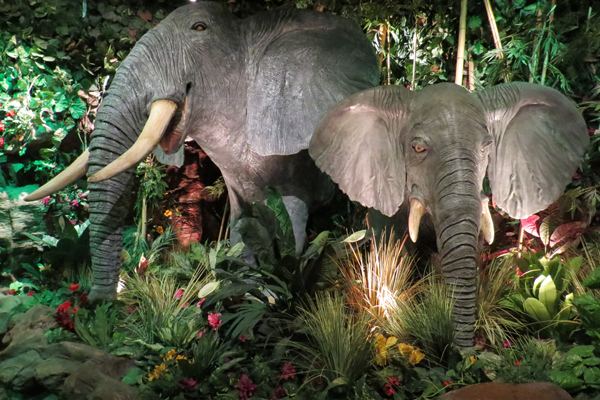 The menu had a little bit of everything. From pasta to steaks, one could find something to eat.

Because I'm old-fashioned, I selected the Beastly Burger ($17.49) which was described as "Two of our 100% beef burgers topped with a fried onion ring. Served on a toasted bun with lettuce, tomato, pickles and cheese."

I selected the Safari Fries as my side. The wait time wasn't long, but I did go over and check out the fish tank and I did experience a Rainforest Cafe thunderstorm.

My meal arrived on a butcher block. The burger was speared with a toothpick and the fries were held in a cardboard box. The burgers were huge and seated unevenly on top of each other. The buns were soaked with grease and very little in comparison to the burgers. The lettuce and tomato were fine, and the solo onion ring was the same size as the bun: too small.

The first bite was decent; there was so much juice and grease that the crunchiness from the vegetables was needed to balance it all out. The burger was so sloppily put together that it needed to be reassembled halfway through eating, because the buns were far too greasy to hold the burgers in place.

The fries were plain and were under-seasoned. With a name like Safari Fries, I expected a bit more flavor. Receiving regular, under-seasoned fries was a letdown. A little Cajun spice could have been used. I was grabbing for the salt and pepper right away, because the fries definitely needed seasoning. The burger actually couldn't be finished, because of the reassembly needed. The overall appearance was just unappealing.

Another item on the menu is the Chicken Tenders ($10.99), which were described as "Golden fried chicken tenders served with your choice of Buffalo sauce and blue cheese dressing or BBQ sauce and ranch dressing." This item was listed on the menu as an appetizer - it was the one we asked to have brought with our meals.

The guest described the tenders as something one would pick up at McDonalds. That fact that they were cold did not help the case, at all.

Another guest ordered the BBQ Bacon Cheeseburger ($15.49), which was described as "Our 100% beef burger topped with our Smokin' Mojo BBQ sauce, Cheddar cheese, bacon and a fried onion ring. Served on a toasted bun with lettuce, tomato and pickles." This guest ordered the Safari Fries as a side.

She was quite happy with the burger and commented on the smokiness of the BBQ sauce and how it complemented the cheese. But she also noticed the buns were little and soaked with grease.

The last guest ordered the Amazon Chicken Fajitas ($19.99), which were described as "Sizzling chicken or beef fajitas, served over grilled onions and bell peppers. Served with sour cream, fresh guacamole, lettuce, Cheddar cheese, pico de gallo, Caribbean rice, black beans and warm flour tortillas." The plate came to the table piping hot. He loved this meal and had no complaints. He often raved about it as we dined.

Even though I was not satisfied with my main course, my guests and I decided on the Sparkling Volcano ($23.99) for dessert. The final course of the night was described as "Enough for three or more! A giant rich chocolate brownie cake stacked up high, served warm with vanilla ice cream, creamy whipped topping and topped with caramel and chocolate sauces."

It is customary that, when a Sparking Volcano is ordered, the wait staff must holler "Volcanooooooooo!" while bringing it to the table. We were not the only table to have ordered this dessert, for we heard the volcano war cry ring through the restaurant several times.

A little sparkler was lit and placed inside the whipped cream; it was quite a delight to see, as sparklers are simply magical. The waitress took it out right after it finished sparkling to ensure there was no threat of fire hazard to customer safety. Once out, we were free to dig in.

One can't go wrong with whipped cream, ice cream and chocolate-caramel sauces, but the brownie cake was hard, dried-out and barely warm.

The Rainforest Cafe is more of an attraction than it is a restaurant. There is much to see and hear, but the food was boring and unimaginative. It's as if I paid $100-plus to see the inside of a jungle-themed venue instead of buying quality food.

Because the Rainforest Cafe is part of the Sheraton Hotel, the prices are a good $10 more, thanks to a hotel tax, which is something guests should keep in mind before visiting.

For this and the combination of lackluster service, decent food and amazing atmosphere, I give the Rainforest Cafe 2.5 out of 5 stars.