•Taken from the June 5 Island Dispatch

In 2004, Pam Braun didn't feel well. After going through a battery of medical tests, she was told that it appeared that she had lymphoma.

Many of her lymph nodes were full of cancer, leading to the lymphoma diagnosis. Braun said that doctors had doubts about their initial diagnosis, however. Because of the doctors' lack of certainty about Braun's condition, she had to undergo more testing, including a mammogram. "The doctors knew that the cancer was gynecological," said Braun, who lives in Van Nuys, California.

"I was probably the only person in the world going into a mammogram, hoping for breast cancer," Braun related. She did not have breast cancer. Subsequently, Braun was diagnosed with fallopian tube cancer, a rare disease that is usually grouped with the more common ovarian cancer. She was informed that the survival rate for her cancer was 15 percent, and that the recurrence rate, should the cancer go into remission, was 75 percent.

Eleven years later, on May 30, Braun, now cancer-free, spoke at Grand Island's Relay For Life about her cancer journey and about the connection that she discovered between cancer and food. The former chef and restaurant owner, who wrote a book titled "The Ultimate Anti-Cancer Cookbook," said that the changes that she made to her lifestyle, including losing weight, exercising, and adjusting her diet, aided in her recovery. She said cancer is an epidemic and that she feels that it is vital that she get her message out about reducing one's risk of cancer via lifestyle changes. Currently, Braun said, a woman has a 1-in-3 chance of getting cancer in her lifetime, and a man and a newborn baby have a 1-in-2 chance of getting cancer in their lifetimes.

"Thirty-five percent of all cancers can be avoided by eating right and exercising," Braun said. She said that the best anti-cancer diet is plant-based and consists mainly of vegetables, fruits, and whole grains. Foods to avoid include red meat, processed meats, and sugary beverages. She included pork in the list of red meats, explaining that, despite the advertising campaign by the pork industry, pork is a red meat and "not the other white meat." She also talked about alcohol consumption, suggesting that women consume no more than one drink per day and men consume no more than two drinks per day. Braun also recommended 30 minutes of exercise per day. 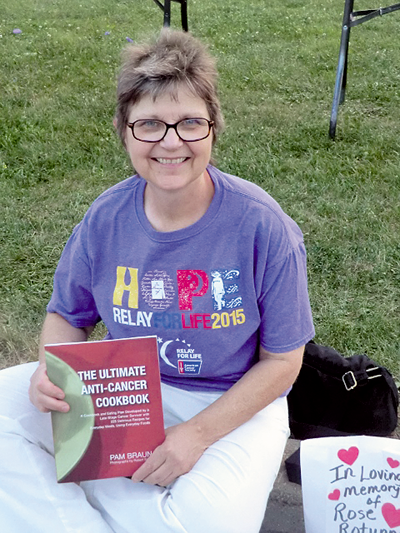 Pam Braun, the author of "The Ultimate Anti-Cancer Cookbook" attended the Grand Island Relay For Life. (Photo by Alice Gerard).

Braun acknowledged that it takes a great deal of effort and a good deal of publicity to effect lifestyle changes. She talked about the changes in attitude about cigarette smoking, a known carcinogen, over the years. When Braun, now 62, rented her first apartment as a young woman, "everyone smoked everywhere." People smoked in grocery stores and in movie theaters and in elevators. Doctors smoked in their offices. Braun, a lifelong nonsmoker, said, "I bought ashtrays for my friends."

"We changed the social consciousness," Braun said. She said that, now, "we don't expect our doctors to smoke in their offices or anyone to smoke around the food in a supermarket."

"Each long journey begins with a small step," Braun said. She suggested that people start their journey to a healthy diet by making small changes. "If you drink three sodas a day, cut it down to two."

Braun said that her own journey has taken her to a place of health. "I've been clean (cancer-free) since March 2005. I feel great, better now than in my 20s. In 11 years, I've had two colds, and both lasted only a few days. I never want to go back there to the time of cancer. It was a terrible feeling."

When asked what she would tell people who are newly diagnosed with cancer, Braun said, "I would tell them, 'As hard as it is, try to relax. Don't listen to the numbers. There is no stage of any cancer that someone hasn't come back from."

"The Ultimate Anti-Cancer Cookbook" was published in 2013 by Rare Bird Books.