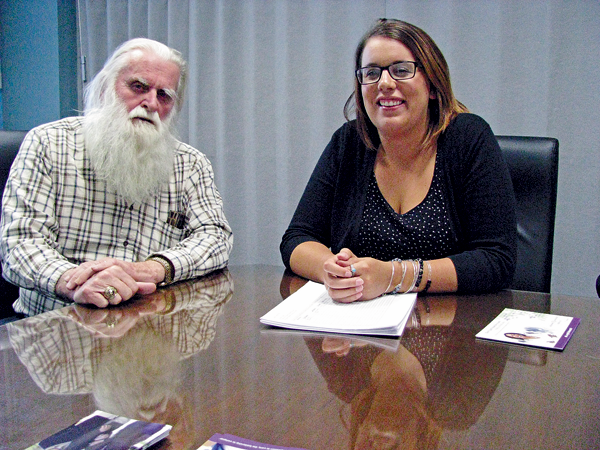 Sadness, depression, fear, loneliness, isolation, confusion, anger ... people who are the prime caregivers for loved ones with Alzheimer's can experience any of these feelings ... and more.

In this area, a support group meets at 6 p.m. on the third Wednesday of each month at Mount St. Mary's Hospital and Health Center in Lewiston. Other support group meetings held in Niagara County include meetings in North Tonawanda, Lockport and Burt.

The Lewiston group, which started last fall, is still small, ranging from one to five participants, coming from Lewiston, Youngstown, Niagara Falls, Sanborn and Grand Island. One woman attends because her mother is displaying early symptoms. One is feeling guilt for giving up and putting a relative in a memory care unit at an assisted living residence. Another attends even though her spouse has already died from the disease.

The meetings provide a chance for caregivers to reduce stress by getting out of the house and talking with others who understand what they are going through and who may be able to offer different coping strategies and day-to-day living tips, according to Shelby Edgerly, Alzheimer's Association of Western New York director of early stage services and of support groups. Edgerly also brings to the meetings informational handouts and a wealth of information about services offered by the Alzheimer's Association and other community groups.

Charles Flay, 77, of Sanborn came to the May meeting to share with others his own experiences. His wife of 53 years, a former nurse, was in Niagara Falls Memorial Medical Center awaiting assignment to a local nursing home.

"I knew this day would come, and I wouldn't have her anymore. ...I didn't want to let her go, but I couldn't do it anymore," he said.

For the past two years, he has been providing 24/7 care and becoming more and more isolated. Their sons live in different parts of the country. She started hiding money in different parts of the house and became combative. Once, she threw a shoe at his head. Later, she asked where the mark came from and when he told her it was from being hit by a shoe, she wanted to know who would do something like that. Because she was getting up at night, he also was losing sleep. "You really get tired out getting up three times a night," he said.

One woman at the meeting said she already has health care proxies and power of attorney set up for herself. However, even though her mother already has lost siblings to Alzheimer's and has been exhibiting some signs of the disease, she has neither. Other family members seem reluctant to discuss the situation, whether it be taking her mother's car keys away or putting money aside for health care if needed. Her mother already purchased a burial plot years ago, but now doesn't remember where it is. Also, her mother still retains sole ownership of her home.

"Waiting for a crisis is not going to work," Edgerly warned, noting that attorneys who specialize in elder care and facilities where Alzheimer's testing can be done are available in Western New York.

Flay told of his own frustration of applying for Medicaid to help pay for a nursing home for his wife. Expenditures for both his wife and himself have to be proven back several years. Due to the rules, a hunting camp he'd signed over to his boys now has to be taken back, this time involving added expense of lawyer's fees.

Call 1-800-272-3900 and ask for Edgerly if you plan to attend the June 17 meeting of the support group at Mount St. Mary's. Not ready or not able to attend a meeting yet? This number also serves as the Alzheimer's Association of Western New York helpline and is available 24/7. Also, go to www.alz.org/wny for information on all the classes, support groups and services the Alzheimer's Association offers, as well as links to other community services. "There's always help available," Edgerly said.

And remember, June is Alzheimer's and Brain Awareness Month.