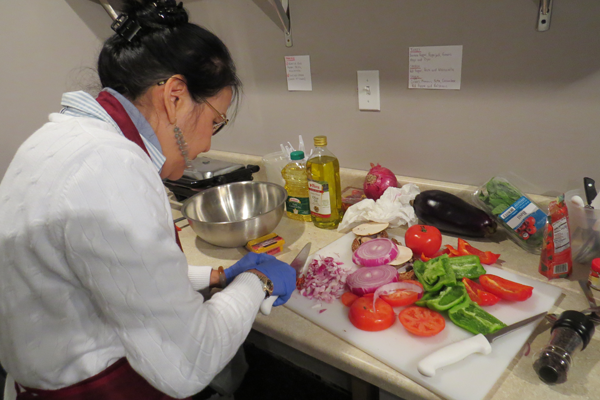 It took 36 years for me to try a veggie wrap.

Prior to Wednesday, no restaurateur, marketing expert, family member or friend had successfully convinced me an accumulation of vegetables counted as an actual meal.

Or that such a stockpiling of colorful Earth candy tasted good.

Or that years of meat-eating, deep-frying and chocolate-dipping wouldn't somehow come to the surface and pummel said vegetables à la Barney Gumble on "The Simpsons."

As Homer once said, "You don't win friends with salad."

But when Piat Phuah said she could blend peppers, onions, mushrooms, eggplant and tomato in such a way that the flavor would knock me over, I was intrigued.

And when I watched her sharpen a "Crocodile Dundee"-sized knife with a piece of China, I was not going to protest. 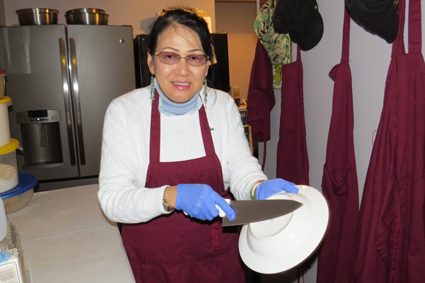 As I watched her cut, season and cook the vegetables, the aroma of the non-meat, non-fried, not-chocolate-covered items filled the room. As Piat "layered the flavors" and started assembling her "Italian wrap," I knew it would be just a matter of seconds before I was asked to take a bite.

Now, I've seen hundreds of bombs dismantled at the last second in scores of movies and TV shows. Surely, I could think of a way to pull the wire, so to speak, and get out of eating this wrap. I have a meeting; a doctor's appointment; jury duty; an audition for "The Voice." Something.

Of course, Piat had traveled all the way from Florida, and it would've been rude to dismiss her hard work and skilled cooking. So, I took a bite.

And, before long, the vegetables were gone.

And I felt ... different. Energetic. Surprised.

When I recounted this tale to family members, explaining what I had done, I was literally asked to produce identification.

Piat Phuah hard at work in the kitchen.

The truth is, Piat was the real deal. And her vegetable medley was (dare I say?) delicious.

While this whole "eating healthy" thing is new to me, the team at 700 Center Street Juice Bistro & Café has been offering River Region customers vegetables, fruits and other organic items for months. The bistro's filled tables tell you customers are happy with the healthy selections.

Not too long ago, bistro owner Barbara Crouthamel happened to meet Piat in Florida. As they chatted, Piat learned of 700 Center's culinary offerings and offered to come to Lewiston. The native Malaysian had operated a restaurant in England, a health food store in Orlando, and traveled the world quizzing top chefs about the ins and outs of their dishes.

She wanted to come to Lewiston because "Barbara is 100 percent striving to do good," Piat said, and some additional chef secrets could make a positive impact on the business.

In between orders Wednesday, Crouthamel and her business partner/chef AnnMarie Destino watched Piat work and learned how she prepares her ingredients.

"She really loves this place. She's really impressed. ... She wants to help me make this a success," Crouthamel said.

Piat said, "You are what you eat." But, as I know all too well, "Sometimes, to eat healthy sounds boring," she noted.

The solution is to "build flavor upon flavor," Piat said.

Though she was only in town for a few days, Piat promised her ancient-meets-modern techniques would rub off on the 700 Center staff, and that customers "will line up" to try the new and improved menu items. 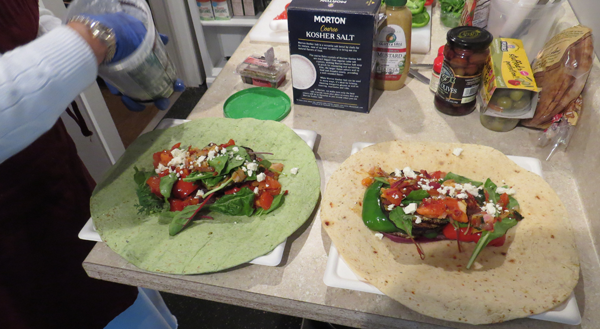 Piat is preparing a series of how-to cooking demonstrations, which she hopes to offer online in the near future.