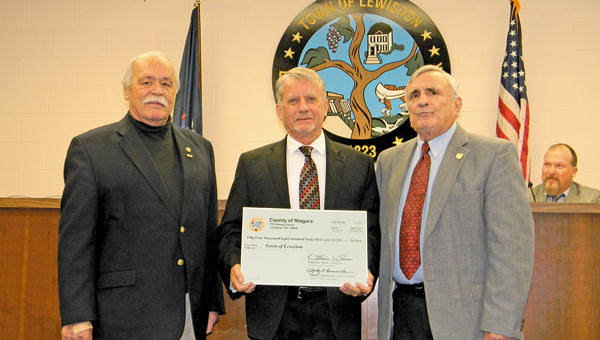 Financials - good and not so good - were heard at the Lewiston Town Board session Monday.

"The gaming laws of 2013 changed for the benefit of the two cities and other 12 towns of Niagara County," Ross said. "It changed to the point where there's money to be distributed, to be used for good causes for the residents of the community. And it's money that will be there every year, unless they change the gaming laws of 2013."

Ross explained he and Burmaster were there to present Lewiston the first check from the final months of 2014 and the early months of 2015: $54,843.23.

"As long as they don't change the gaming laws, this money will be there for the very foreseeable future," Ross said. He and Burmaster said it reflects revenue from Seneca Gaming Corp. operations in the county - around $900,000 per year. "Out of that, about 75 percent of the $900,000 will go to the local governments," Ross said.

He said the remaining 25 percent will go toward economic development and organizations throughout Niagara County - such as the Niagara River Region Chamber of Commerce, the Lewiston Jazz Festival, Lewiston Art Festival and Artpark in Lewiston.

"This money is for these organizations to do good for the residents of their community," Ross said. "So that 25 percent can certainly be used in Lewiston where they have so many great activities going on."

Burmaster said the monies reflected gaming revenues coming back to the county and "We felt it was only right" to give it back to communities. Both legislators said Lewiston, like others in the county, can look forward to seeing similar funding gifts down the road.

Soon after, in remarks from town department heads, Brochey and board members heard the not so good: the costs from a harsh winter. Town Highway Superintendent Doug Janese reported on significant expenses in the highway department's salt budget.

"The costs are almost completed. You recall we budgeted about $150,000 for the salt; the costs came to about $215,000," Janese said, noting money from highway equipment lines managed to cover some of that. "I told you there would be a 27 percent increase (from last year) ... well, the costs came to 31 percent."

"We'll have to work on a more accurate (plowing) budget for next year," Brochey replied.

To cover the costs, Janese said he shifted money around from lines that had been cut earlier - labor, garage maintenance, etc. He said he was putting in for county reimbursements to further cover winter expenses. "Look, we had a bad winter," Janese said, adding he was hoping the expected monies would help offset the winter expenses.

Other money matters, less significant, saw the board approving the following:

•A bid of $3,900 awarded to Reinforced Concrete of Sanborn for repairs to the Town Hall front entranceway.

•A request by Lewiston Police Chief Chris Salada to upgrade defibrillators in all town buildings at a cost of $378.83.

•A request by Town Clerk Donna Garfinkel and Town Finance Officer Martha Blazick to approve $2,502.32 in election-related costs from the recent special election, with money to come from the now-former tax receiver's office account.

•A request from Water Pollution Control Center Administrator Jeff Ritter to pursue Greenway funding not to exceed $9,000 for modest upgrades to the still-unused Lewiston comfort station on River Road across from the Lewiston Senior Center.

•The board approved payment of the remaining Modern tipping fees (amount unspecified) from the final quarter of 2014 to Artpark & Company. The town earlier was in discussions with Artpark for similar funding for 2015, but no progress has yet been made.

•Newly appointed Deputy Supervisor Mark Briglio of Lewiston was sworn in to the post at Monday's session.