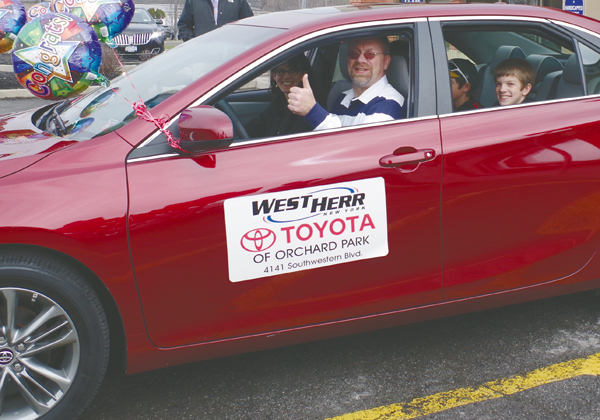 R.J. Wynne, his wife, Audra, and sons, David, Paul and Joseph, sit in the car in front of the Tim Hortons at Grand Island Boulevard and Staley Road where he bought his winning cup. (Photos by Larry Austin)

•Taken from the April 24 Island Dispatch

RRRoll Up the Rim to Win contest winner receives prize

Tim Hortons Cafe & Bake Shop presented R.J. Wynne of Grand Island with the grand prize of a new car in the RRRoll Up the Rim to Win contest Friday.

Wynne and his family took the keys at the restaurant where he bought a winning cup in February. He purchased a large coffee at the Tim Hortons on the corner of Grand Island Boulevard and Staley Road on a Saturday morning at about 9:30 a.m.

Wynne said he's been playing the RRRoll Up the Rim to Win game for years, but hadn't previously won more than a coffee or doughnut.

R.J. said it was his son, Paul, who rolled up the rim to win the day after he bought the coffee.

"It was very exciting for everybody," Wynne said of the day Paul rolled up the rim on the winning cup to discover the words "WIN CAR." R.J. didn't believe the story Paul and another son, Joseph, told him of winning a car. "I thought they were teasing me, but they showed me the cup and it was real."

"I was in another room when they came dancing in, and I thought for sure it was a rehearsed acting class, but it really was true," he said.

R.J. said before going to the restaurant to take steps to collect his prize, he set the cup aside with the instructions "Don't touch the cup on the bookshelf!" Later, they hid the cup after social media helped spread the news of their good fortune to thousands of friends.

Wynne went to the restaurant and picked up a winning prize form and took it and the cup to Fahim Mojawalla at the Island Ship Center, who sent it overnight to prize headquarters in Maine. Even when Wynne came in to ship the winning cup, he was unsure he actually won, Mojawalla said.

The big day arrived Friday as the new car sat in front of the restaurant and television and newspaper reporters arrived to witness the car presentation. Paul, 10, said it was "super fun" to be sitting in the winning car Friday.

The restaurant owners, Wendy Clark Wolfe and Brian Clark, handed Wynne the keys to a 2015 Toyota Camry SE from West Herr Automotive that has a sticker price of $27,565.

Clark Wolfe said she and Brian, who count the Island's other Tim Hortons near Martin's Fantasy Island among their holdings, had another patron win a car in the contest last year at their restaurant at 870 Maple Road in Williamsville.

"We had big winners like TVs and gift cards and barbecues and those types, but two cars in two years, that's pretty cool," she said.

As R.J., his wife, Audra, and sons, David, Paul and Joseph sat in the car for the first time, Clark Wolfe called the Camry "a perfect fit" for them.

"How exciting to be able to give a car, especially to a family," she said. "See the guys fit in there perfectly, the three little guys," she said. "This car is perfect for this family."

The contest runs from February to mid-March.

"See, it really does happen," Clark Wolfe said to a customer in the drive-thru who saw the presentation waiting in line. 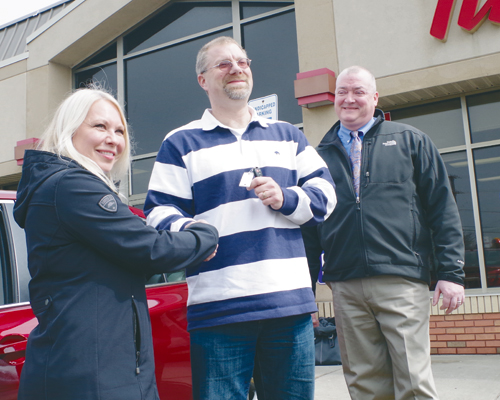