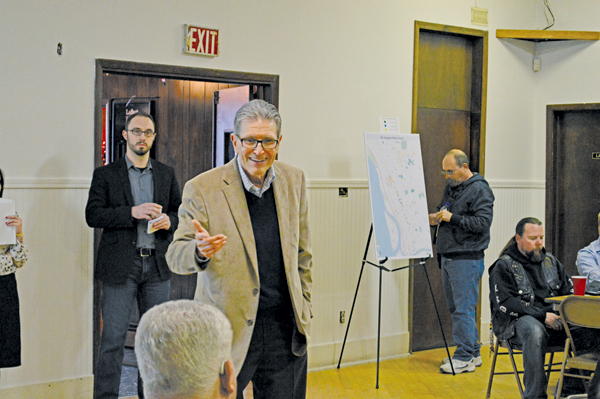 Breathing new life into an old neighborhood is the plan of action for North Tonawanda's Oliver Street in the coming years, at least if Lumber City Development Corporation has anything to say about it.

The group solidified its intent at a series of meetings designed to bring residents into the revitalization process. Last Thursday, representatives from the economic development corporation met with residents at Dom Polski for an open meeting to hear their concerns and ideas for a fresh, new Oliver Street.

LCDC emphasized the importance of getting residents involved in the project.

"I'm not telling you any secrets, I'm sure, when I say that for decades now, politicians and groups like Lumber City have been telling you, let's revitalize the Oliver Street neighborhood, and the neighborhood's certainly been telling that to the politicians. Not enough's been done and that's clear," LCDC consultant Harry Sicherman told the few dozen participants in the room.

Noting the city has named Oliver Street as a top concern, he added, "The question was, how do we address that, how do we get something going here, how do we get a toehold, get it moving, brand it?

"The answer to that is, we know from doing it in a lot of other places, it's literally with a thousand points of light. What I mean by that is, everybody who has a vested interest at all in the Oliver Street neighborhood or even in North Tonawanda in general needs to be involved in the effort to revitalize Oliver Street. You can't do it with just you folks (in the audience), and you can't do it with government coming in, even throwing all the money in the world at it."

"Money is not what changes it. Everybody working together is what changes it," Sicherman said. "I only want to see two things come out of (these meetings), and that's some level of enthusiasm that will give us a little toehold and some level of commitment from the neighborhood."

During the meeting, residents split into six small groups, each with a facilitator from LCDC, to share their thoughts. After about an hour, each facilitator presented their group's comments.

A common theme in all the groups was a concern for the cleanliness and overall visual representation of Oliver Street, which included issues such as vacant storefronts and poorly kept properties.

"There's still an ongoing concern that Oliver Street looks shabbier than it needs to because of some of these aesthetic things," said facilitator Chuck Bell.

One of the suggestions his group came up with was a partnership with the railroad industry to paint unsightly overpasses, which could then be decorated by local artists.

Related to improving the aesthetics of the area is LCDC's plan to repair storefront facades along a portion of the street, improving the appearance of more run-down stores between ones that are already visually appealing.

"We've got nice places along the way - we just need to string them together," said Rich Andres, another facilitator.

Attracting new businesses, as well as new customers, was also an important factor to many residents. Multiple groups expressed a desire for a place like a coffee shop or deli in the area. Other suggestions included a 24-hour diner or boutiques, plus forming a merchants' or business group to represent the area.

New medical or dental offices were also brought up, as well as satellite offices for county services or a police substation.

Sicherman said all of those ideas, as well as those brought up at a second session held Tuesday, would be compiled and considered in LCDC's plans for Oliver Street. 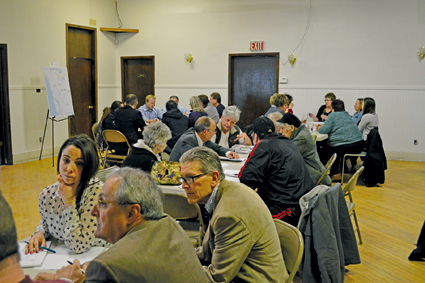 Residents split into six groups to discuss the future they want to see on Oliver Street.