Editor's Note: In this excerpt from a 1981 speech to the Grand Island Historical Society, Shirley Kreger Luther recalls "Life on the Home Front" during World War II. She recounts events that led to publishing the Islander newspaper, which was sent to Island servicemen and women from 1943-45.

In 1941, according to town census figures, Grand Island had a population of 1,055. My cousin, Reg Long, was supervisor. We had two bridges - just eight years old, and only the Express Highway or Grand Island Boulevard. The Town Board met in the old No. 9 School. It consisted of the supervisor, two councilmen and two justices of the peace. (This was changed in 1972 when we became a first-class town).

The Grand Island Fire Co. was meeting in the original Town Hall. We had one school - old Sidway, (occupied in 1937, using four classrooms with 100 students). Miss Veronica Connor (supervising principal of Grand Island Schools) had been with us just five years. After eighth grade, everyone was bused off the island to Tonawanda High School.

I remember sitting in Tonawanda High auditorium and all of us crying because war had been declared. Later, I was a member of a canteen group in Tonawanda, formed to have dances for the soldiers and sailors stationed in the area.

Actually, on Dec. 7, I was with my parents for dinner at the home of the Rev. and Mrs. Harvey Schooping in Buffalo. We all crowded around the radio to hear about Pearl Harbor and the devastation by the Japanese. Somehow, I'm glad no TV was available to show us the horrible details of the sinking of many of our ships. 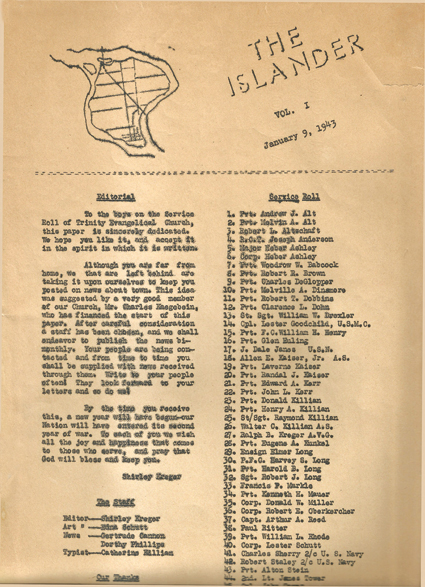 The senior class of Tonawanda High School graduation in June 1942 was sad. "We'll Meet Again" was the class song. We all cried, somehow knowing some of us never would.

I went to work at Remington Rand in Tonawanda. Gas rationing became a fact of life, and carpooling was a must. I was picked up by a friend on his way to work at Curtiss Wright, dropped off at my girlfriend's house, drove her sister's car to Spaulding Fiber in Tonawanda. Her sister worked there.

My girlfriend and I walked across the railroad tracks to the Remington Rand office to work every day, and back at night. We did what we had to do. During the years, the work force of the office girls became very close. No men were around to date. We cashed our paychecks each week (mine was $19) hopped on the bus, went to Buffalo, out to eat, shopping and to the show. Not a very exciting life!

We saw bases established around the Island. East River Road and Ransom, Beaver Island, past the pavilion to the circle area. It was total isolation and, as later quoted in the Islander, the soldiers hated it. They had to walk everywhere. I gave many of them rides. Today, we wouldn't dare do that with strangers.

It was a time before old Trinity Church was moved to its present location. St. Stephen's Church had its barn and our two youth fellowship groups mingled and had a good time. Off-Island people couldn't understand how our two groups, Catholic and Protestant, got along so well. City people weren't allowed to intermingle. The Island was really ahead of the times.

It was a time when nylon stockings were scarce. My brother, home on leave, even stood in line to get a pair for me. Brotherly love!

We had a "look-out tower" at old No. 9 School (now site of the Town Hall). My mother and my aunt were two of the "watchers," looking for enemy planes.

Islanders collected scrap metal for the war effort. A huge pile of scrap material was accumulated where the firehall now stands. And victory gardens were everywhere. A long hard winter delayed our gardens, but we had them. We had to eat.

It was 4 1/2 years of struggle during the war; sacrifices made by everyone. Men, as well as women, headed for the war plants, building warplanes at Curtiss Wright and Bell Aircraft, and our young men left for the war effort.

By January 1943, there were 70 men in service. The numbers continued to grow. It seemed like a lot to ask from a small town.

About this time, I was instrumental in starting a newsletter for our servicemen. Calling it "The Islander," it was published from January 1943 through November 1945. I was the editor. Originally, Charles Kaegebein from Trinity Church gave me $10 and asked that I write to our boys. Knowing this would be difficult to do on an individual basis, I started the paper. I began with 53 names from Trinity Church. Gradually, the list grew. Edna Schutt Delaney, Dorothy Phillips Mesmer, Gert Cannon Wilson and Catherine Killian Long joined me and became the staff that worked together almost three years at my parents' home.

I bought a desk for $5, and had maps of the U.S. and the world on the den walls so we could see where everyone was going. We were even allowed to use the church mimeograph machine. (Eventually, the Town Fathers purchased one for us.) Money was really no problem, as all the parents donated money. After the final edition in 1945, funds that were left over went to the newly formed Grand Island Memorial Library. 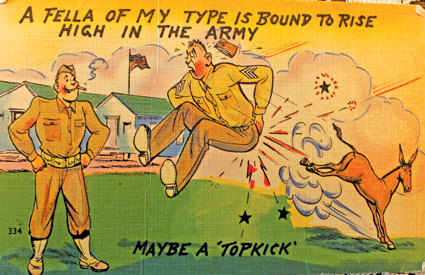