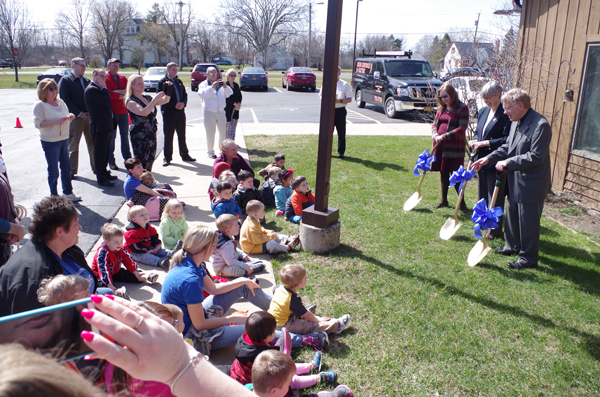 St. Timothy Evangelical Lutheran Church Pastor Dean Hunneshagen speaks to the children of the St. Timothy Lutheran Church Child Care Center prior to a groundbreaking ceremony Wednesday for an expansion of the center. Joining him are Lydia Shiposki, director of the day care center, and Town Supervisor Mary Cooke. (Photo by Larry Austin)

The first shovels went into the ground Wednesday at a ceremony heralding the expansion of the St. Timothy Lutheran Church Child Care Center.

The ceremonial groundbreaking took place for the Legacy Project, a $150,000 expansion of the center at St. Timothy's. The project that had its genesis in about 2009 beginning with napkin designs, church leaders said, will open in September at the church, 1453 Staley Road.

The Legacy Project is the second major expansion for the congregation, which in 1956 held a groundbreaking for the original church at the corner of Staley and Stony Point roads after outgrowing its space in the old legion hall in Ferry Village. The church expanded the first time in the 1990s at the formation of its child care service.

St. Timothy Pastor Dean Hunneshagen said there are many child care centers, but few are conceived and operated by a church. The children attending the ceremony Wednesday had been in church with Hunneshagen earlier that day. "We celebrate the love of God and we introduce them at the very infant stages," he said of the child care center.

Hunneshagen said studies show practicing Christians want to be part of a church that is actively involved in the community and making a difference.

"And that would fit the description of St. Timothy," Hunneshagen said, where the day care ministry is an outward expression of what they say in words.

The groundbreaking was attended by parents and children, church members and Town Supervisor Mary Cooke. The ceremony offered an opportunity for Mike Endres, a lifelong member of St. Timothy and chairman of the church's finance committee, to praise several members of the congregation for their efforts in making the Legacy Project a reality. Among others, he thanked Ryan Cummings, chairman of the Church Board and provider of legal services for the project; Paul Glassman, who provided surveying services; Ron Stipp who handled fire, safety and data requirements; and Frank Sturniolo, lead designer, who recruited other designers and architects like Alex Grande and Dave Zielinske.

"The project really took off when Frank Sturniolo put together some conceptual drawings, what was possible on this piece of land," Cummings said. "And from that moment on, the momentum from the congregation really took off and there was just no stopping it."

"That was just a huge chunk of money if we had to go out and buy that," Endres said of the work volunteered by members of the church.

Endres also praised church member Dottie Roehrig. "Her gift to St. Timothy in 2009 in memory of her mother got us thinking that we could do great things," Endres said.

Cummings also thanked the congregation, calling their commitment to making the project a reality "one of the best examples of Christian stewardship."

There were no fundraisers held for the project, but rather the congregation came forward and dug into their pockets.

"We had large donations, small donations," Endres said, estimating 75 percent of the active congregation contributed to the project. "Which in today's day and age, we're really proud of that, to get that kind of support."

The church leaders said they would not have gone forward with the project if they couldn't raise the money for it in full. The project would never create a debt for the church, Cummings said, and he applauded Endres and Hunneshagen for achieving that mandate.

"The final 15 thousand was harder than the first 135," Hunneshagen said, laughing. "People stepped up to the plate and they rallied."

The new addition will be moving forward at the start of construction season with real shovels in the ground in the next week or two, Hunneshagen said, adding that contractor Don Benoit has got people lined up who "put us at the head of their list."

The diamond-shaped building will feature a lot of glass and will be a focal point to see from Staley and Stony Point roads, Endres said.

When it was built 25 years ago, security concerns at schools were not what they are today, so the new addition will address access in and out of the building.

"The parking lot will be chopped off," Endres added. "One of our big problems that we have now is, in the mornings when traffic is backed up, people cut through our parking lots and it's a real safety issue for us."

The center will gain a new classroom by moving the office to the new building. The work required passage of a local law to allow day care centers in residential neighborhoods.

Parents are already planning for the next school year and touring the facility with hopes of enrolling their children for September for one of the 240 weekly slots available.

The groundbreaking Wednesday was timely, Cummings said, because in September of this year when the grand opening of the expansion takes place the center will start its 25th year of existence.

"We are continuing to expand and grow and meet the needs of the Island as we see it and to expand our child care center ministry," Cummings said.