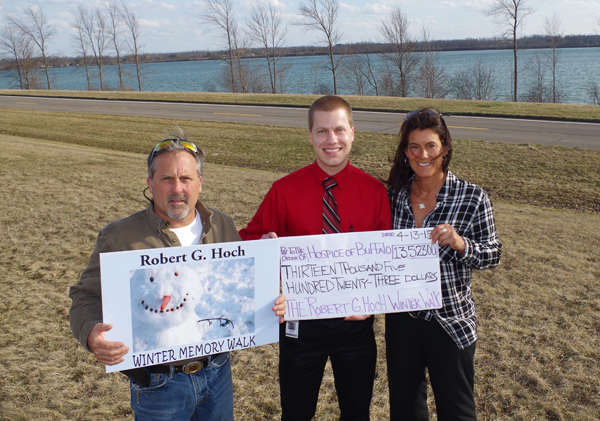 T.J. and Robin Hoch flank David Yacono, special events associate at Hospice Buffalo, during a presentation along the West River of a check for $13,523, the proceeds from the Robert G. Hoch Winter Memory Walk. The walk is a fundraiser for Hospice that T.J. and Robin run in memory of and in tribute to their late father. (Photo by Larry Austin)

The late Robert Hoch's children Tim and Robin presented a check for $13,523 to David Yacono, special events associate at Hospice Buffalo. The money was raised at the Winter Memory Walk, which took place Feb. 28 along the West River. Bitter cold weather the day of the event was in contrast to Monday's check presentation that occurred in weather probably 60 degrees warmer than on the day of the event. Harsh weather in February did not dissuade supporters from making the fundraising walk, nor visit the after-party at the Riverstone Grill.

The Hoch name will be noted on a fish tank in the family room area, and an 8-inch brick will pay tribute to Hoch in the Hospice garden, Yacono said.

Robin said it's "hard to believe it's been five years" that they've run a fundraiser in honor of their late father. The event annually took place in winter right after the Super Bowl and before the spring. In addition to the stellar view of the river, walkers who took part in the stroll along the West River Parkway read signs dedicated to departed loved ones.

"We just wanted to stand out and make it a little different and more personal with the signs as well, and the beauty of our area," Robin Hoch said of holding the event in winter.

A popular post-walk after-party was another highlight of the fundraiser. Robin said the after-parties were fun and the patrons were generous,

"I walked into Riverstone Grill and I was blown away," Yacono said of this year's after-party. "The place was packed. It was wonderful."

Robin said a lot of dedicated supporters in family and friends made the event an annual success that surpassed their expectations.

"Every year we had a goal, and it was like, 'Holy cow, we reached it,'" Robin said. "But it always worked out. We always were able to get the support."