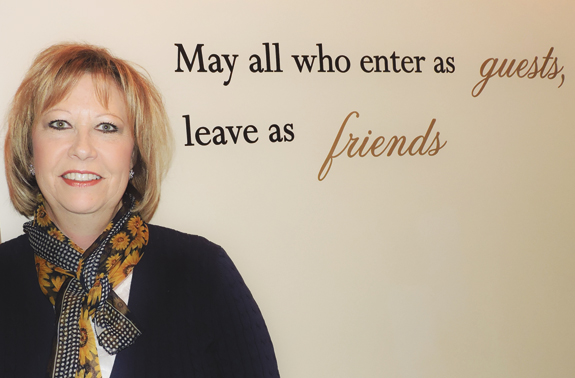 Tasia Fitzpatrick honored as Village of Lewiston Citizen of the Year

Fitzpatrick's commitment to the community she lives in has helped make Lewiston a better place to live, work and visit. The mayor recognized her efforts, saying, "She is always friendly and willing to help out with any project needed to make the village a better place."

In 2008, after actively looking for the perfect home, Tasia and her husband, Paul, fell in love with a house on Niagara Street - along with the charm and history of the village. The next year, they moved into their home, after making extensive renovations to bring back the original intent of the house from three apartments to one beautiful farmhouse. The renovations included taking out walls, restoring woodwork and moving many original floorboards from the second floor to the first. The house was featured in the 2010 Lewiston Tour of Homes and also was the 2014 Tour of Kitchens showcase.

Fitzpatrick said she loves to make Lewiston the highlight of conversations and is proud of where she lives. She joined the Lewiston Beautification Commission and Lewiston Garden Club with a group of five friends, and she enjoys bringing the extra touches to the village that people love to see - from flowers to garland. Both groups have made it their mission to look after village upkeep and have adopted a garden across from Academy Park.

Following a hard winter in 2014, more work was needed than usual to spruce up Center Street. The long winter took a toll on plants, painting, fences and more throughout the village. The Fitzpatricks saw what needed to be done to tidy up, and spray-painted all of the garbage cans in the village over one weekend.

Decorating has always been a passion for Fitzpatrick. She studied architecture in college and, although that didn't lead to her professional career, it contributed to her love of designing. She has created décor for both the Lewiston Tour of Homes and Tour of Kitchens. In 2011, her design won an award at the Tour of Kitchens. In 2014, her design (with design partner Susan Hofert) won again at the Tour of Homes.

Over the years, she worked with friends to recreate functional spaces, designs and unique tablescapes. Her décor is known as "Rooms Re-Created by Tasia." The style is casual and comfortable with a lived-in and functional look. Inspiration often comes from outdoors and using whatever elements and furniture are on hand. She loves to take items that are already used in a house and recreate a different look and style or placement of them.

The Fitzpatricks and their new puppy, Duke, love living in Lewiston. They enjoy entertaining at their house and showcasing the lifestyle Lewiston has to offer. Every Tuesday night in the summer, they host a "friends and family" party, providing a warm and inviting setting for those attending or listening to Artpark concerts. The friendly community atmosphere and local events that keep the village busy are two reasons the Fitzpatricks have encouraged others to move here.

As lifetime members of the Historical Association of Lewiston and supporters of the Lewiston Jazz Festival, Tasia and Paul have immersed themselves into creating a wonderful quality of life in this community.

She commutes to Buffalo where she is a vice president/operations manager for M&T Bank. She's celebrating 36 years in banking.

The Fitzpatrick children, Keith (Emily) and Leah (Perry), and grandchildren, Graeme and Perry III, live in the south, but love coming to visit.