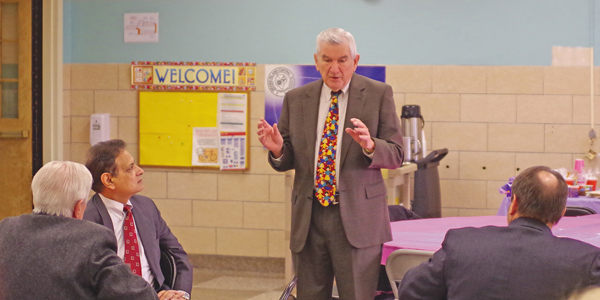 •Taken from the March 27 Island Dispatch

New York State Board of Regents member and chancellor emeritus Robert M. Bennett was asked about the Buffalo school system, a question that ended with the phrase, "Is that too hard of a question?"

"No, oh, no," Bennett said. "Everybody's entitled to my opinion."

And he gave opinions freely during an hour-long breakfast meeting of The Rotary Club of Grand Island held at Kaegebein Elementary School Wednesday morning.

Thursday, Gov. Andrew Cuomo said "Education is the largest single expenditure in the state budget. The relevant budget decision is not just how much we spend, but how we spend it. What are we doing about failing schools, how do we pay teachers and what we are paying for are questions that are implicitly raised in every budget. This year, we are for the first time, asking how we can successfully address and fix a broken education bureaucracy that has relegated tens of thousands of New York's children to failing schools every year and how to improve the overall performance of our education system."

"I will not sign a budget without real ethics reform or agree to a dramatic increase in education aid without education reform that provides accountability, performance and standards," Cuomo said.

Bennett called Common Core standards "very, very misunderstood." He said they were learning standards developed in 2008-09 by 45 states, with a final version supported because the data would suggest the new standards are an improvement from preschool to grade 12.

"Our high school graduates were winding up in remedial programs in math and English in almost every single college in the country," Bennett said. "Upwards of 50 percent of the kids had to take remediation in math and English, so that meant, basically, they weren't ready. They had not been prepared properly in P-12 system. So these standards were more challenging, more rigorous, for example, more reading, much more emphasis on literacy."

Results of assessments in 2013 in math and English in grades 3-8 "upset people because the results were very revealing. They weren't as good as previous tests," he said. They were challenging, and so then what do you do? You attack the test, or you say the standards were too soon, or they're too hard, there wasn't enough professional development, we didn't do this, we didn't do that."

Bennett said, however, as it turned out, standards "got bunched" with teacher evaluation and that standards and assessments aren't a "gotcha" system in order to fire teachers.

"And this obsession with testing is something that I, to this day, I am very, very troubled by," he said

Teachers are assessed 60 percent on classroom observation and 20 percent on local assessments. "So 80 points was entirely local and still is," he said.

A proposed reform would make the evaluation system include 50 percent of a grade 3-8 teacher evaluation score based on a paper and pencil test and an additional 35 percent of a teacher's evaluation on an outside evaluator, which Superintendent Teresa Lawrence wrote, "is ludicrous and insulting to the profession. There is no room for Gov. Cuomo's politics in our schools."

"The argument now is the governor is using the budget in a threat, which is not going to stand," Bennett said. "This issue will be resolved afterwards. I think it will go away. Fifty percent in an evaluation on one state test just doesn't make any sense at all. And it won't stand, can't stand, it shouldn't stand. You can't do that to people."

"There isn't one superintendent or one teacher who supports that, nor should they," he added.

Bennett was blunt about the Buffalo Public School system saying 3,000 kids want out.

"The law says if you're in a failing school for a certain period of time, you have a right to be transferred," Bennett said. "Problem is there's nowhere to transfer in Buffalo. It's a very serious federal civil rights issue, quite frankly. They have a right that's not being met."

Asked what can be done to make a huge improvement for the whole atmosphere for Buffalo schools, he said, "I think you've got to have a school board that does not micromanage the hiring of people.

"You have to have a superintendent with authority to say, upon analysis, 97 administrators in central office needs to be reduced to maybe, maybe, 30," Bennett said. Every principal is going to be reviewed to see if they belong in those schools. I would say to you a significant number do not because they got there because they knew somebody on the school board. That's the history.

"There's lots of things you could do, and I think that we might be getting close. Everything that Carl Paladino has said is accurate," Bennett said.