Lewiston-Porter Board of Education hears about Common Core testing

New superintendent to be announced at April 28 session

The Lewiston Porter Board of Education is facing several issues this spring, including the budget, a new superintendent search and, now, a group of concerned parents questioning New York's Common Core testing.

Gabriela McCann spoke to the board as a representative of the Lew-Port Advocates for Student Centered Education. She is asking the board to give parents the facts about the state's Common Core testing, including the option to opt out of the test. Her concerns are with testing grades three to eight.

McCann said the school district does not lose funding if there is less than 95 percent participation on state tests - at least that hasn't happened to this point. She also explained students requiring additional services or advancing into the next grade are not affected by refusing the testing.

McCann is not asking for a child to be dismissed from school during the testing, but to be allowed to read or do other work while other students test.

She did say the district could find it harder to receive its allocation from the state.

Board of Education President Jodee Riordan has been in communication with McCann and asked her to come to speak to the board.

"We also embrace the Common Core and we feel the kids are ready for the tests. If a parent feels their child has an issue with the test, we work with them on an individual basis," Riordan added. "We have an obligation to uphold the laws. As a district, it's against federal law to opt out."

McCann said parents with questions on Common Core testing or the advocacy group can visit www.lewportadvocates.weebly.com.

•Riordan said the search process for the superintendent is down to two candidates and an announcement will be made at the April 28 board meeting.

•The budget process is ongoing and the board is confident with what members have done thus far - even though the state has no budget and the Lew-Port district has no monetary amount it can work with, Riordan said.

"We are going with what we got last year and looking at a modest increase in the tax rate," she said. "It's really for maintenance and keeping all the programs we have and possibly restore some.

"We want to replace our fund balance and get us out of the fiscal crisis the state put us in."

•Lewiston-Porter students will be attending school Mondays, April 27 and May 4, in order to make up school closure dates from past weeks. The days were originally scheduled as conference days.

•In related news, Superintendent Christopher Roser informed the board he and the Lew-Port administration are working on a one- and two-hour delay plan for unanticipated district closings next year.

•The board tabled action on a 2015-16 field trip to Australia for students to attend the "Super Science Fair" until further discussion can be held.

•The Lew-Port School District annual meeting, election and budget vote will be Tuesday, May 19. There are three seats up for election. Petitions for nomination of candidates are available at the district office and must be filed by Monday, April 20.

Propositions must be submitted by March 31 or April 4, depending on the content of the proposition. Voting hours will be 8 a.m. to 9 p.m. in the Community Resource Center.

•The next regular board meeting will be Tuesday, April 28. Budget work sessions are set for March 31, April 7 and April 14. A special meeting of the board will be held April 21, time to be announced, in order to conduct the BOCES vote. 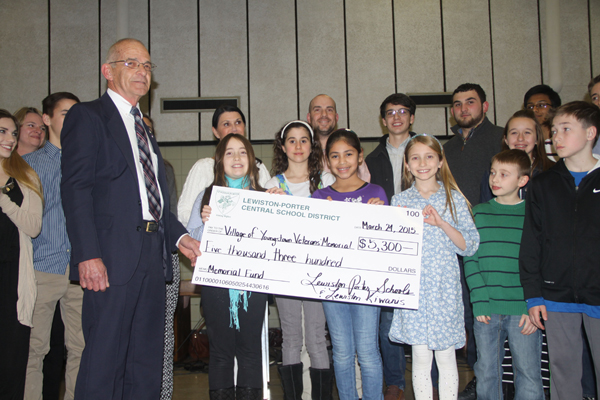 Youngstown Mayor Raleigh Reynolds accepted a check for $5,300 from the Lewiston-Porter students at Tuesday's meeting. The funds will be used to repair the Veterans Memorial in Youngstown that was ruined by vandals earlier this year. Students raised the funds by selling wristbands. The Kiwanis Club of Lewiston matched the amount. (Photo by Janet Schultz)