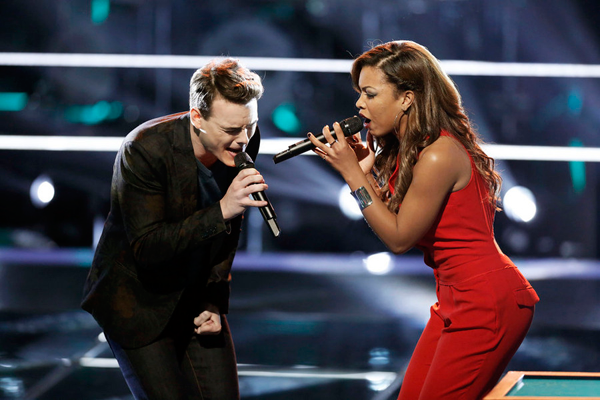 'The Voice': India and Clinton provide Best. 'Battle.' Ever.

There's no doubt the first "Battle Round" is the hardest stage of "The Voice." Each singer is paired with another and asked to both overtake and harmonize with the other person.

Simply put, each performer has to shine a light on a partner while shining an even bigger light on self.

It's not an easy process. But when done correctly, it's possible both singers can advance (one winning, the other "stolen" by another coach).

The best example of a "Battle Round" pairing built for success was last week's coupling of 21-year-old India Carney, a Brooklyn singer classically trained and excelling at UCLA, with 26-year-old Arkansas singer Clinton Washington, who's been successful working a marketing job in New York City.

The two performed Rihanna's "Stay," and just about convinced all of America they truly were in love with each other. The performance was surprisingly equal, which was unexpected (India was a four-chair turn; Clinton only earned an "I Want You" button press from coach Christina Aguilera).

"Man, that was technically the best 'Battle' I've seen this season," coach Pharrell Williams said. "I see two people who are so positive about what they want in life. Congratulations to both of you guys."

"The original version of that song is simpler, and you guys elaborated a lot," coach Adam Levine said. "It was a stylistic choice, but also executed in a really precise, amazing way.

"Clinton, I've got to be honest with you, man, like, I saw you get up here with India, and I was like, 'Oh, man. Poor Clinton.' But then, you proceeded to be, like, the male counterpart ... of India.

"Christina is the only one who turned around for you, Clinton, which makes us three look like total bozos; because you guys were absolutely equals up there.

"I just got wrapped up in that," coach Blake Shelton said. "I didn't feel like I was watching a 'Battle.' I felt like I was just watching a music video of a great recording."

"I guess if I had to pick somebody it would have to just be based on looks, and she's way prettier than you, dude," Blake told Clinton.

"You both have amazing, dynamic voices," Christina said. "But the restraint that you guys showed - the connection - everything was just so strategically placed and was executed so perfectly.

"This is a very tough choice for me, and you guys both just showed that you have a reason to be here."

"I have so much respect for you guys as vocalists," she added.

Christina chose India, but told Clinton the decision was painful.

Following the victory, India said, "I've been so nervous this whole time. And it just means so much to win."

Adam and Pharrell wasted little time in trying to "steal" Clinton, which made Christina squeal with joy.

"That makes me so happy!" she said.

"What really attracts me to what you're doing is the fact that you are extremely confident, and I heard that in your voice today," Adam said. "And that's why I pressed my button to steal you."

"Adam is right," Pharrell said. "You did a great job. I would love to have you, and I really, honestly, think that you have what it takes to win the show.

"I've never won the show before. So, do I want you on my team? Absolutely."

"They're both incredible good artists; incredible coaches," he said. "But Adam aligns with a little bit more of what I'm trying to do. I think I've got a lot more growing to do, and I think he's going to get me there."

"He's going to learn a lot from you, though," Christina said. "You're going to be a good coach for him."

"I was really blown away by Clinton," Adam said. "He's clearly capable of a lot. I'm very happy with my choice."

In an interview the next day, India told BTS, "I am not exaggerating when I say Clinton and I were practicing every second of every day. And that's really the practice that we needed to make it a 'Battle' that resonated with the both of us. We were always just finding areas that needed more work, and worked together to fix them so that it was something that we were both really proud of.

"We took all of the critiques that Christina had to say and that (team mentor) Nick (Jonas) gave us and tried to incorporate that and, you know, our ideas what we thought the song needed to mold it into a performance piece."

Clinton added, "We were given a really strong song choice so, I mean, it was - it started out as a very unemotional arrangement, so we had ... I felt ... a really strong ability to take that song and make it into something that would resonate and be memorable.

"But we also, I felt like, had a really strong affinity for being able to blend. I mean, India has spent countless, countless hours before even 'The Voice' just working with other people and learning how to harmonize and give the counterpart ability to breathe and show their vocal presence. And so I felt like that made it a more relatable performance, because we both had that blending ability to really let each other shine and make it, as they said, more a duet than a battle. So just, like, that skill set I feel like is what really pushed it over the edge."

Though both singers are expected to contend for this season's title, India definitely proved she's a next-level talent. Winning "The Voice" would give her an opportunity to try her hand at something new: going solo.

"Yes, that would be an entirely new direction for me, because I haven't actually spent a lot of time thinking about myself as an artist. I've just been working in groups and loving that so much. But sometimes I forget that I really do want to do this as a solo career at some point. So if I'm fortunate enough to win, I'll definitely take that time to figure out exactly where I want to go as an artist, which is definitely going to be in, like, the pop and R&B field. But at some point I would love to, you know, get back into musical theater.

"So it's just going to be - it's going to be - I don't know, just a lot of emotions going on, because I'm also still finding myself as an artist, and figuring out exactly what direction I'm going in."