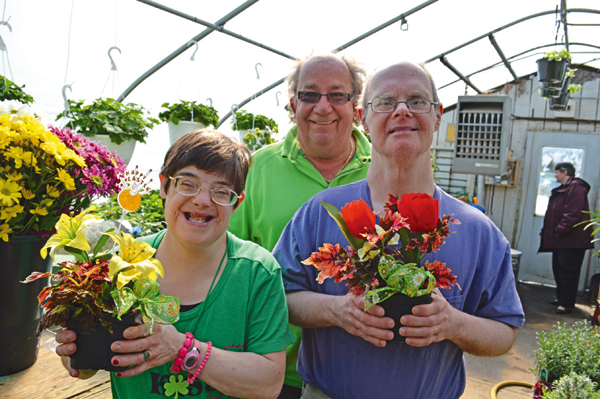 March is Developmental Disabilities Awareness Month. It's a time to educate the community about the issues facing people with developmental and intellectual disabilities and advocate for those individuals in Albany.

But at Opportunities Unlimited of Niagara, it's also a time to show gratitude to the community that supports the organization.

2015 is a big year for OUN itself, however, as the organization celebrates its 60th anniversary in June. Founded in 1955 as part of NYSARC, the Niagara chapter of Opportunities Unlimited now serves 617 individuals with disabilities and their families throughout Niagara County and neighboring communities, offering support programs from birth to the elder years.

It's that range of services that Roxane Albond-Buchner, manager of communications at OUN, wants people to know about.

"Most people drive by our building or they might attend (an event) ... because they like doing those things, but I don't think they really understand who they're supporting with that or the complexity of who we are," Albond-Buchner said.

Among the programs offered are recreational activities for people ages 10-18 and 19 and older, where participants meet as a group to go out into the community. Participants self-select which activities they'd like to do every two months, including things like seeing a professional sports game, going to a theater or seeing a movie. 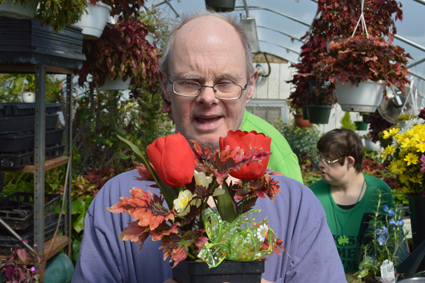 Ricky Koban shows off an arrangement he just finished. Connie Greer works on a floral arrangement.

"It gives the individuals the ability to go out with their peers (and) enjoy activities in the community with the support of the recreation team - so they're still safe," Albond-Buchner said.

There also is a fine arts program, which Albond-Buchner took care to distinguish from arts and crafts. In the program, taught by art teacher Marcia Ross, participants learn about creating art and take trips to art galleries and museums. One of the program's recent projects had individuals recreate Vincent van Gogh's "Starry Night." Other pieces those students have created decorate the many walls of OUN's Town of Niagara building.

The fine arts program is "about the process, it's the learning experience of trying new things," Albond-Buchner said. "It's a matter of opening our individuals' minds to what all is out there."

And through the horticulture therapy program, OUN participants learn not only how to plant and nurture tropical plants, but social and money skills, as well, when they go out on cart sales to sell those plants at local businesses.

Program participants volunteer, too. As part of the dayhab program, individuals volunteer in nursing homes and take meals to shut-ins, among other things. It's another way of breaking down the barriers in the community.

"It's really nice to see them treated as any other volunteer is treated coming into those volunteer sites. ... The places that we do volunteer at have been amazingly supportive and they don't segregate our guys."

Finding ways to integrate people with disabilities into the larger community is an important part of OUN's mission. People are more accepting of individuals with disabilities in modern times, but some are still unsure of how to interact with them, so they avoid communication, Albond-Buchner said.

"Our individuals are people. They laugh, they cry, they dream, they work, they play, just like everybody else," she said, adding that, by labeling individuals with disabilities, people are only seeing the disability, not the person. Albond-Buchner said she wants the community to interact with people with disabilities and treat them as they would anyone else.

"Down deep, that's their greatest desire, is to just be a regular person," she said.

Of course, the biggest challenge organizations like OUN face is funding. Those programs have waiting lists and need more funding to meet the needs of the community, Albond-Buchner said.

Besides the number of people in need and trouble paying for the programs currently in place, the state government has instituted new regulations about which programs should be offered, a change that organizations struggle to adjust to.

"Not that we're not willing to, because independence and integration are the key things for every individual. (It's) trying to figure out: How do we do that?" Albond-Buchner said. "The agencies all want to do the right thing; it's a matter of funding,"

OUN and organizations like it also have turned to the community for help, searching for volunteers to help with advocacy, teach remedial math and reading or job training or help out in other ways. OUN also regularly holds auctions and sales of flowers and art, which Albond-Buchner said the community has been "extremely generous" in participating in.

It's that same desire to help that drives many of OUN's employees, as well.

Albond-Buchner started at OUN in 2003, a decision she called a "no-brainer," having been a volunteer there with her mother when she was younger. Continuing the tradition, her husband and daughter now volunteer with her.

"It's home ... I couldn't imagine working anywhere else," Albond-Buchner said. "You can't help but feel adopted and part of this family, and it's something that makes you work harder, because you know our individuals and their families are counting on you to do a good job. Someone has to be here to help them."

She called the front-line staff at the organization "heroes" who "make a difference every day." Albond-Buchner added that more than 14 percent of the staff at OUN had worked there for more than 20 years. It is a difficult job, she said, but, "People say it's the most rewarding thing they've ever done."

Albond-Buchner related a story about one of the program's individuals, a young man who communicated primarily through guttural noises. He was in the fine arts program run by Ross.

"Those little spots ... when they're out in the community and you see them and they're just beaming ... it's amazing. It's what keeps everyone going here." 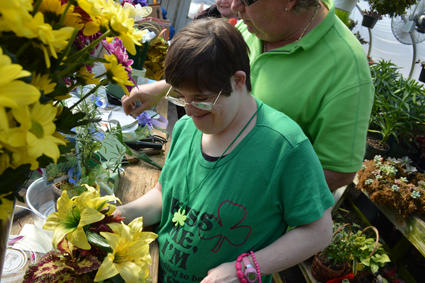