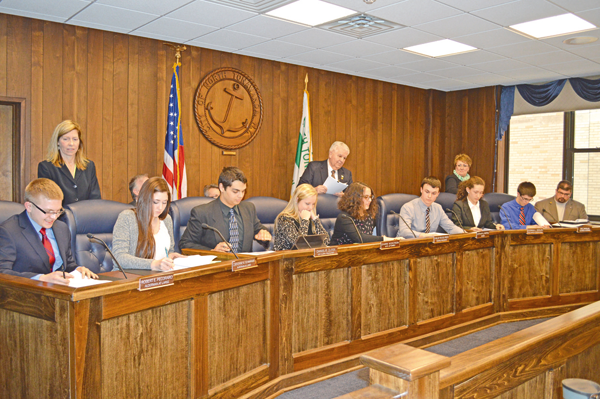 Students run the show in NT

The City of North Tonawanda and North Tonawanda High School teamed up Tuesday to celebrate Student Government Day, an opportunity for high school students to shadow government officials for a day and learn about how a city is run.

Students spent the morning touring city hall and the city's police station before meeting up with their Government Day mentors. The students ended the day by conducting a Common Council meeting under the guidance of city officials.

The students who participated were Jacob Lemke, standing in as mayor for Art Pappas, Allie Eckstein as city attorney for Shawn Nickerson, William Alvarado as clerk/treasurer for Dan Quinn, Abigail Giambra as Council president for Russ Rizzo, Katrina Bonefede as alderman at large for Cathy Schwandt, James Hutton as alderman at large for Robert Pecoraro, Karylin Rivera as 2nd ward alderman for Donna Braun and Joe Kraus as 3rd ward alderman for Eric Zadzilka.

"I know his (Lemke's) future will be great, along with all these other students who participated," Pappas said. "The future of our city is good because of them and because of the parents, the teachers. ... Hang in there, and you, too, might be up here officially in a few years."

Each of the students expressed gratitude for the chance to experience a role in government.

"I would just like to say, as student council president and as a representative of the student body, I would like to thank all the city officials and department position heads that allowed all of us - I believe 19 students - to come out today and enjoy such a wonderful day exploring City Hall," Alvarado said. "And thanks to all the elected officials that are up here for allowing us scrungy little teenagers to sit in your seats."

In other council news:

•City resident Helen W. Allen was recognized as the city's oldest resident, having recently celebrated her 107th birthday. She was given a commemorative silver coin of the city for the occasion.

When asked the secret to her longevity, Allen said she didn't really have one, but to "just live each day as it comes along, good or bad."

"You know what she told me on the phone? Every day is a good day," Pappas said. "What a wonderful philosophy."

•The council approved Greg Doel's request for assistance in holding the fourth annual Webster Concert Series in front of Crazy Jake's this summer. 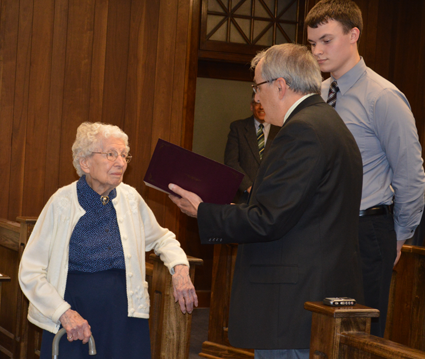 Helen W. Allen recently celebrated her 107th birthday. She was recognized at the start of the meeting by Mayor Arthur Pappas, shadowed by student Jacob Lemke.