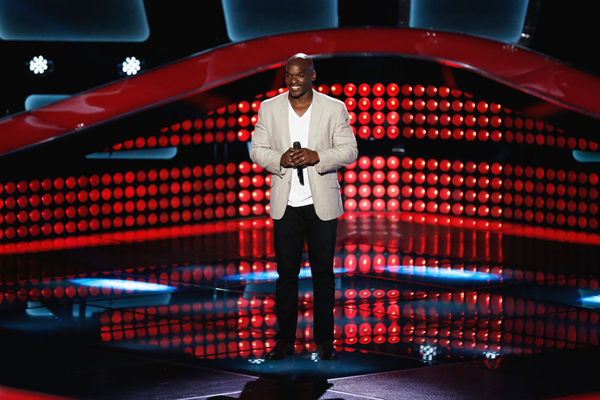 Some singers audition for "The Voice" without any previous stage or singing experience, and with little know-how about competition.

That's not the case with 30-year-old Jeremy Gaynor, who is the West Point Band's male lead vocalist. He came onto NBC's hit reality series ready to rock and roll.

"The West Point Band is the oldest musical organization in the Army," Jeremy said in his televised interview. "It goes back about 200 years.

Though he's only been active for a handful of those 200 years, his time in that environment has provided him with direction - and a sizable platform, performing in front of soldiers around the world.

"Our main mission is to provide world-class music that educates, motivates and inspires the academy's core of cadets," he said. "To know that I encouraged the widow who just lost his husband - encouraging my fellow soldiers is pretty big."

Last Tuesday, Jeremy performed "Superstar," a '60s-era song penned by Bonnie Bramlett and Leon Russell. All four coaches hit their respective "I Want You" button and turned chairs around for the singer.

As Jeremy was wrapping his number, he sang, "I love you."

Coach Christina Aguilera shouted back, "I love you, too!"

She pointed out her button was hit first.

"You're a great singer, dude," Blake said. "And I may seem like not the perfect coach for you, but I guarantee I can carry you through the gauntlet of 'The Voice.' (If) we get you into the live shows, America's going to love you."

"First and foremost, just thank you for what you do," coach Adam Levine said. "Secondly, there's something about the charm of how you performed. If you couldn't turn around and see what Mick Jagger was doing, it would be pretty difficult to totally understand what Mick Jagger does. But when you see the way that you performed, it adds to what is already a natural gift that you have.

"Being in the military, obviously, work ethic is a big thing. I'm a maniac when it comes to that. I love to win. I'm a competitive dude. And I'd love to be a part of that. I really would."

Christina said, "Jeremy, your talent is pretty undeniable, and it is the reason why I continue to come back to 'The Voice.'

"You know, my dad was a sergeant in the Army, so I know that background very well. I feel like you have a lot of stories to tell."

She added, "Look, I know that Pharrell is probably a very strong candidate for you. But I, too, am very deeply rooted in my love of R&B music. And I think that you are one of those potential greats that needs to be a household name."

Pharrell said, "Congratulations on four chairs. I would love to have you. Your voice is amazing. This must be a really incredible moment for you, because it's what you dreamt to do. ... And you're headed there. Just know that."

"You are unbelievable," she told him. In a post-audition interview, Christina added, "I'm just so proud that Jeremy's on my team and I can support that phenomenal voice and talent.

"He's one to be reckoned with."

Jeremy said, "I thought, for sure, I was going to go with Adam. But Christina just kept bringing it - just kept coming. She just swayed me."

Jeremy began his time with the band in a less glamorous position.

"I mean, with my Army career I was fortunate enough to be part of the Army entertainment detachment where, you know, for about three years, I kind of sat in that seat and just soaked up as much knowledge as possible, sitting in the background doing production as the production stage manager, eventually leading to a point to where I had enough knowledge and enough experience to be able to share some of that knowledge with other amateur artists within the Army.

"I guess with the way I'm built with my work ethic, I kind of got lost in being a background guy - being a behind-the-scenes guy, and just pushing, you know, other artists to the forefront. And I mean, when the opportunity opened up for the West Point Band, I was actually a bit timid to audition, but at the same time it had been something that it was also, like, a dream come true for me to be able to serve my country doing the thing that I loved - the thing that I feel like I was put on this earth to do, and that's encourage and motivate and inspire other individuals. Share my gift with the world."

His rose to the top in a competition similar to what he'll face on "The Voice."

"Auditioning for the West Point Band, you know, it was strenuous process where I had to submit a DVD application. They had to screen through it and I was selected out of, I don't know how many contestants, but I was selected to be one of the top four guys who came in," Jeremy said. "And just day by day it was kind of like a gauntlet-type situation to where each day there was one singer eliminated. And at the end of the day, I ended up being on top."

"And so with that, my Army background basic training, just everything that we have to go through, I felt like 'The Voice' was just right down my alley," Jeremy said. "And I mean, it ended up being a sporadic situation where I was just really going out to do a mission for the Army and sing the national anthem. And I just so happened to find out that they were having 'Voice' auditions at the same location that I was singing the national anthem (MetLife Stadium in New Jersey). So I saw it initially as an opportunity for me to tell the Army story, and it started off that way. And I just began to rediscover myself as an artist, fall back in love with my music, and just redevelop this passion for being an individual artist.

"And it kind of led me to the blind auditions and Team Christina, where I am now."

"The Voice" continues Mondays and Tuesdays at 8 p.m. on NBC. Find more about the artists at http://www.nbc.com/the-voice.