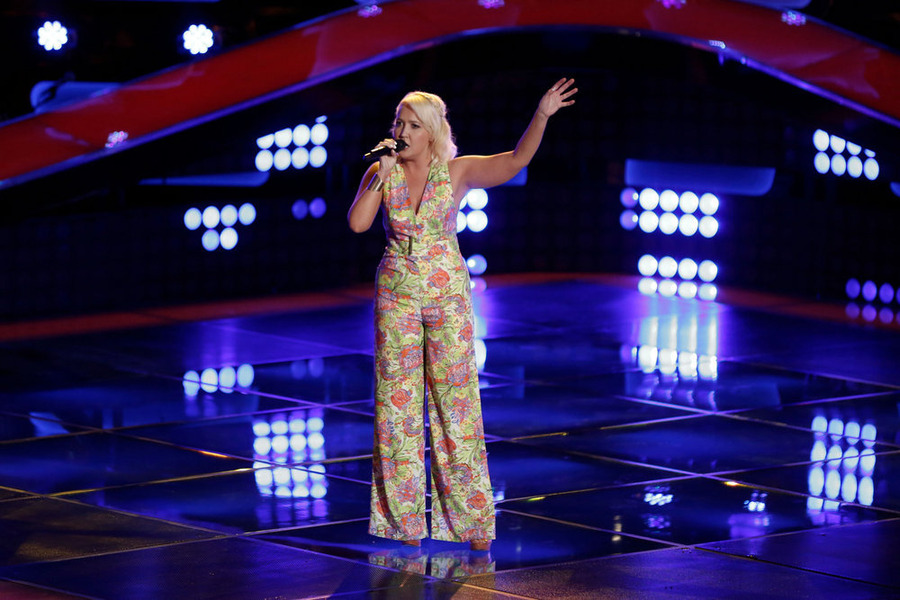 "The Voice": Meghan Linsey sings for the audience. (NBC photo by Tyler Golden)

'The Voice': Meghan Linsey is back, aiming to be better than ever

It's a harsh reality for many singers.

Once a performer has "made it," there's no guarantee he or she can make it last. The industry has a short memory. For those without a rolling string of hits, the biz can be brutal.

Bullied, betrayed or bewildered by a record label, several singers have turned to NBC's "The Voice" for a do-over (or, in some cases, a "do-better"). Cassadee Pope, Christina Grimmie, Judith Hill, Tony Lucca and Juliet Simms are among the performers who had a taste of "fame and fortune" prior to "The Voice." Each left the show with a more defined skill set and a greater number of fans.

Meghan Linsey hopes to find herself on that list this season.

The 28-year-old Nashville singer won CMT's reality series "Can You Duet" in 2009 with her twosome Steel Magnolia. She scored a record deal - and even opened for "Voice" coach Blake Shelton.

With a hit song ("Keep on Lovin' You") in tow, Steel Magnolia toured for a few years. The duo didn't last, however, and Meghan opted to try her hand as a solo artist.

"In a duo ... it's so much give and take, and I feel like I wasn't always able to really express myself the way I wanted to - especially being on a major label and, you know, not having any experience going in," she told BTS. "I really kind of got steamrolled on a lot of things. And so I think, you know, I'm grateful for the country music platform. I'm grateful for that opportunity. I'm grateful for the success of Steel Magnolia, because I've just learned so much and it's, you know, I have a great fanbase from that. But at the same time, you know, coming back and then trying to do the solo thing after that, it's interesting.

"I feel like, you know, sometimes you get - they build you up so much and then it's like, 'OK, well, you know, where are you guys now?' You know, (I'm) making music and trying to put it out and it's not easy."

Meghan tried out for "The Voice" thinking Blake might recruit her for his team. Ironically, he was the only coach who didn't hit his "I Want You" button following her rendition of "Love Hurts."

"I toured with him," Meghan said.

"She's one of the best singers I've ever heard in my life," Blake said.

"My jaw is kind of still dropped open," Christina said.

"You made me believe that - uuuhhh - love hurts," she added. "You were just giving it, and I was just so enraptured. You are the definition of 'The Voice' for me. I want to be your coach. ... I am 'Team Meghan.' Forget Team Xtina. I'm Team Meghan."

"I turned around because I felt like I sensed your soul," coach Pharrell Williams said. "It was a little bit of Joplin-esque attitude, and I would love to just garnish you with song selections. You're the main course here."

"The wild, feral part of you - the ferocious thing that pops out when no one's turning around - I would love to work with that kind of ambition," he added.

"There's a lot of talk about genre," Adam said. "That's the beautiful thing about someone like yourself, is it doesn't seem like there is a box for you. To me, the best singers are the ones that combine that raw passion and the control of their voice. I believe you are so on the precipice of that, and that's why I want you, Meghan, on my team really bad."

"So it was an opportunity for me to be seen and to sing the way I want to sing and do things the way I want to do, and for that to be seen instead of just this manufactured - you know, this manufactured product out of this, you know, machine. So this is - I think that's the thing I love about 'The Voice,' you know? It's just this - it's real, and we're all real people doing this together; and we all have struggles and we all have our things, you know? We all come from different places in life. And so it's really cool that this is kind of like, it's my second chance to do something that I really believe in."

"The Voice" continues Mondays and Tuesdays at 8 p.m. on NBC. Find more about the artists at www.nbc.com/the-voice.