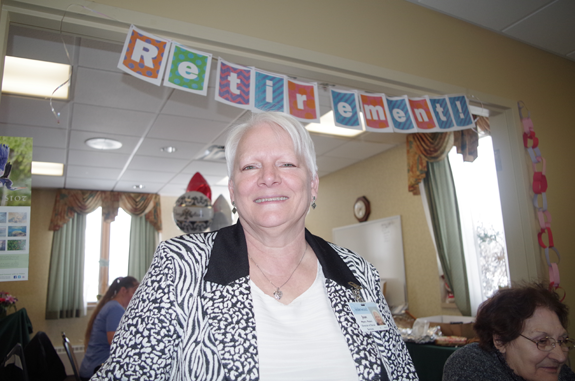 •Taken from the Feb. 20 Island Dispatch

Peters will retire as Elderwood at Grand Island's director of social services after working for the company for 25 years. She worked as a long-term care social worker for 30 years.

She loves her profession, saying, "Working with the elderly is very rewarding because they have so much wisdom and they have so much to share about their life experiences that it's just amazing. I think that's really important for people to know."

She recommends working with the elderly to those just entering the field.

"They always want to work with kids, and they don't know that there's this whole population of people that are so wonderful to work with," Peters said.

Peters is a longtime Islander as well. "We've lived on the Island for 44 years," she said. She worked on the Island location for 15 years at Elderwood, working for five years and moving on to other facilities in the Elderwood family, but she moved back to Elderwood at Grand Island "because this is home."

Likewise, Peters will be missed by Elderwood. Randy Muenzner, vice president of operations, and Peters go back a long ways, about 30 years, to a time when the facility was called Grand Island Manor. They both worked for Bob Chur when he bought it under the Elderwood name.

Muenzner described her as a "very compassionate person. To me, she's in the right field. She's a social worker and has the residents' best interests at heart."

He called her a fantastic employee, dedicated, with a great work ethic.

"It's hard to find people like that. I understand that they've got somebody to replace her. Hopefully it's somebody as hard-working and compassionate as Jean is," he said.

She will come back to the office to train her replacement. "It will be sad when I walk out the door though," Peters said.

Peters was touched by the party thrown by her coworkers Friday, a party attended by both fellow employees and residents.

"This was such an honor that they put this all together. I just feel so blessed to have worked at Elderwood," she said.