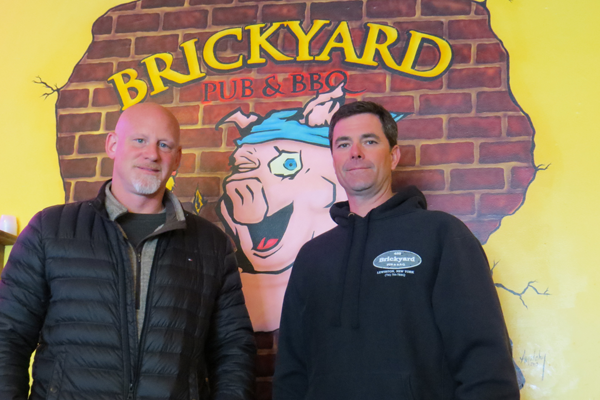 Little did Brickyard owners Ken Bryan and Eric Matthews know 10 years ago that bringing southern food to the north side of Center Street would be a resounding success; that their bar would be overflowing with people more often than not; or that a small deck area would become a popular festival hangout.

"We knew it would be busy," Bryan said. "I don't think we ever thought it would be as busy as it is."

"It's definitely exceeded all expectations, I think for sure," Matthews said.

All of these things have combined to make Bryan's and Matthews' Lewiston eatery - their second of four village restaurants - the River Region's go-to culinary spot.

Barbecue is everywhere these days. It's served in non-traditional restaurants, super popular in the summertime and a staple of cooking television programs and competitions. But that wasn't the case when Bryan and Matthews opened The Brickyard in 2005.

"We were looking and hoping for the next niche in food," Bryan said. "There was really no barbecue in the area. It wasn't a hot commodity, as trends go, at the time. It was a combination of a gamble and a liking of the food. ... We had somebody who was helping us prepare that menu.

"At the time, we started our house-rub wings. For the first three months, we couldn't give them away - and we did, literally, give them away every Thursday night. And now we can't keep them in stock."

When Matthews and Bryan decided to transform the former Lewiston Brew House into a pulled-pork, ribs and brisket joint, they didn't just stock up on brown sugar and cumin.

"To provide the quality of product that we felt that we needed to give, we needed to spend the money and (get) the proper equipment," Bryan said.

They purchased smokers. Bryan joked these machines almost bankrupt The Brickyard before it opened.

"We could've bought two cars for the price of two smokers," Matthews said.

"They're expensive," Matthews said. "It's just a matter of having the right equipment and making it easier for your staff, too.

"Those two pieces of equipment run almost 24 hours a day in the summertime."

"A philosophy in all our restaurants (is) quality and quantity," Bryan said. "And more for the customer than for us. We brought in the highest-end product that we could and started with that. ... We wanted to try to do it the right way.

"We have a lot of people that come from the Texas area - all over the south - who say our barbecue matches up - if not beats - a lot of the places in the south." 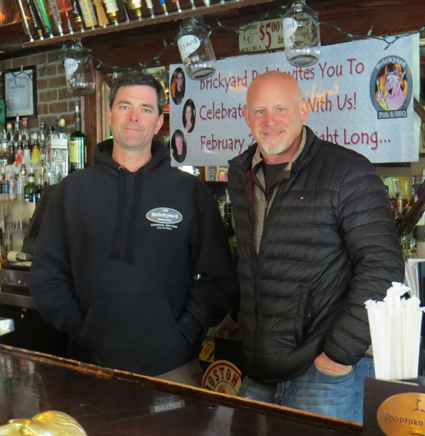 When a restaurant has good food - unique food - it's not uncommon to see tables and booths filled with diners.

Bryan and Matthews figured their barbecue idea had potential.

"When we first decided to do it, we had Tin Pan for 10 years. We were doing 'X' amount of business. We said, 'Well, if we can get up on Center Street, we'll do a little bit more,' " Matthews said.

That "little bit" more has turned into a dependably full bar, a packed dining area and a banquet room so in demand it's often reserved twice a day in the summer months. Lewiston clubs dine weekly inside the meeting space.

Last weekend, a hockey tournament at Niagara University brought a walk-in group of 30 to The Brickyard one day. That was followed by another 20 people. ... And yet another 30 diners the next day.

"We've been known as the place that can handle that type of volume of people walking in," Matthews said. "Yeah, do we wish they'd call ahead of time? It would be great - but they never do!"

"We manage to have enough food on hand and enough things that we can take care of (them)," he added. At the same time, "People know they can go here and get a quick meal and get out and get back to the tournament."

When Bryan and Matthews purchased 432 Center St., the inside of the building had lower ceilings and the banquet room was underutilized. They quickly changed the interior to what it is today and people responded positively.

Part of the new look brought attention to the side deck, which was small and somewhat idle.

"We tried to open it up a little bit and give it a little more life," Bryan said.

He and Matthews replaced the deck with a cement patio. About five years ago, with more and more people eating and drinking outside, they added a second level.

"That was a good addition," Matthews said.

The top floor is a popular hangout following Artpark concerts and even more so on festival weekends. Matthews said it's quickly booked - sometimes a year in advance.

"It's been great," he said. "We've expanded here - expanded the patio and changed the place over 10 times with the façade and the inside and building our business."

Bryan and Matthews are celebrating The Brickyard's 10th anniversary Friday with musicians Joe Marohn and A-List, a hula-hoop contest, late-night buffet and the return of some original bartenders. The goal is to "Just have some fun," Matthews said.

"We have to say 'Thank you' to our staff," Bryan said.

"Thank you to all the patrons," he added.

"Thanks to everybody," Matthews said.

"Lewiston's treated us very well - from the village to the town to the customers," Bryan said.

Jennifer Pauly, president of the Niagara River Region Chamber of Commerce, said, "The Village of Lewiston is lucky to have The Brickyard as one of the mainstay restaurants. Always providing quality food, a great atmosphere and involved in the community, it's no secret why there is always a crowd there. As a two-time Business of the Year award honoree of the chamber, Ken, Eric, Steve (Matthews) and the entire staff always goes above and beyond to serve the customers and community. We look forward to seeing them grow in the next 10 years of business!"

Moving past this weekend's event and looking to the next decade, "We have a few plans," Bryan said. "If business stays the way it's going, we would like to give it another facelift from the inside."

The restaurateurs purchased the building next door, Brio Pizzeria, in 2013. Late last year, they took over 453 Center St. - formerly Town Hall American Bistro - and converted it into Center Cut: The Village Steakhouse.

In September, Bryan and Matthews celebrated 20 years as owners of Tin Pan Alley in the Cayuga Street mini-plaza.

"We're very fortunate to have a few places in this town," Matthews said.