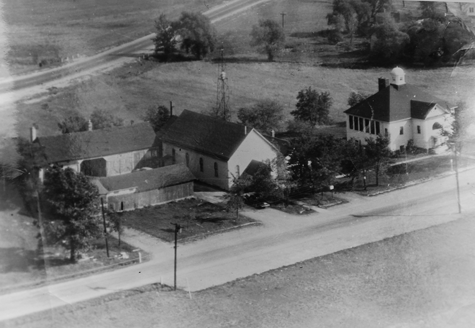 Aerial shot of Grand Island, circa 1950s, with Baseline Road in the foreground and the Express Highway (now Grand Island Boulevard) in back. The Town Hall and garage are to the left in the photo, and School No. 9, at Whitehaven and Baseline, is on the right. Click for a larger image.

Before the Bridges: When ferry boats plied the river

•Taken from the Feb. 13 Islandwide Dispatch

Shirley Kreger Luther was with the first group to walk over the North Grand Island Bridge on wooden planks during the final phase of construction in 1934, before the bridge was even open to traffic.

Shirley, her brother, Ralph, and parents Ben and Mabel made the trip with family friends, got ice cream on 62nd Street in Niagara Falls and returned.

The historic trip was fitting for a girl whose family had long pushed for the bridge's construction. She gave a first-hand account of Grand Island's past during a panel discussion and luncheon last year on the topic "Before the Bridges."

"Remembering things from long ago can be difficult for all of us," Luther told the audience. "When we were young, we usually didn't pay attention to anything. I really vaguely remember a lot that went on before the bridges. I was younger than the rest of them here," she joked to her three fellow 90-something panelists at the Buffalo Launch Club, there at the invitation of the Dispatch.

"In 1930, the census for Grand Island was 630 people, so you can see how we really grew," Luther remarked. The town website says Grand Island is now home to more than 20,000 residents.

Shirley Luther's roots run deep on the Island, with prominent relatives in politics, and, like her three fellow speakers, family names that reach way back from the Island's early days right up to the present. Some of Shirley's forebears have names familiar to readers from Island street signs - Long Road, Alvin Road, Luther Lane and Schutt Court. Her family can claim several pioneers in the movement to get bridges to connect the Island to the mainland.

She is related to three of Grand Island's town supervisors. Her great-grandparents came from Germany, and her great-grandfather, Joachim Long, was Grand Island town supervisor from 1883-86. Henry W. Long, her grandfather, was supervisor from 1918-24. Her late husband, LaVerne "Bunny" Luther, led the town from 1980-87 and again in 1990-91. They raised their four children on Grand Island: Gail Click, Carol Dunworth, Nancy Sandford and Robert Luther, a U.S. Army corporal who was killed in Vietnam in 1970.

She was co-chair of the Veterans' Memorial Wall Committee that planned and had built the memorial in Veterans Park and she is creator of the Wall of Supervisors in the lower lobby of Town Hall.

The push for Island bridges

Grand Island was purchased from the Senecas in 1815. Forests of oak trees drew settlers for the Island's valuable lumber. Farms then flourished and the Island became a popular summer resort with sprawling, gracious estates, private clubs and summer homes. It officially became a town in 1852. Two ferries provided transportation to and from the Island before the bridges were built. One launched from the former Bedell House in Ferry Village and the other from the site of the current Byblos Niagara Resort & Spa.

Luther's grandfather, Henry Long, went to Washington, D.C., in 1898 to make a case for bridge construction, but he died in 1925 without seeing his dream come true. A decade later, Island schoolchildren were bused to the South Grand Island Bridge for its grand opening, where noted urban planner Robert Moses and other dignitaries joined in the celebration in 1935. Grand Island Boulevard, then called the Express Highway, had been built in 1933-34, Luther said, to connect the two bridges. The Congregational Church was torn down to make room for the highway to come through. "The second set of bridges didn't come 'til the 1960s," she explained. "But there certainly wasn't the flow of traffic that we have now."

Growing up, Luther lived at the corner of Baseline and Bedell roads in a home heated only by a wood stove. Their house was near the family's big barn, which became the Grand Island Playhouse years later. "The Island has changed so much ... from when we were little. I can remember my brother and my cousin, Bud Long, used to skate from Bedell Road down to Long Road. There were no houses there. Then they would pull me along in a sleigh because I was the little one to tag along at the time."

Her grandfather had a cider mill, and the Island had peach and apple orchards. "I can remember walking home from school and seeing wagons lined up on Baseline Road for the apples to be made into cider." In 1929, a nationwide blight came along and wiped out the apple orchards. That was the end of the cider mill. But parts of the old business became the basis for some new businesses. When they tore down the cider mill, part of the mill was moved down Baseline Road and became part of the original Phillips Garage. There also was a big "dry house" where they dried the apples. They tore down the dry house, and part of the lumber was used for Alvin Long's house at the corner of Whitehaven and Baseline. Alvin Long, Luther's uncle, was a member of the Town Board from 1926-28. He was born on the Island in 1890 and was a member of the town's Planning Board from 1940 until his death in 1954. 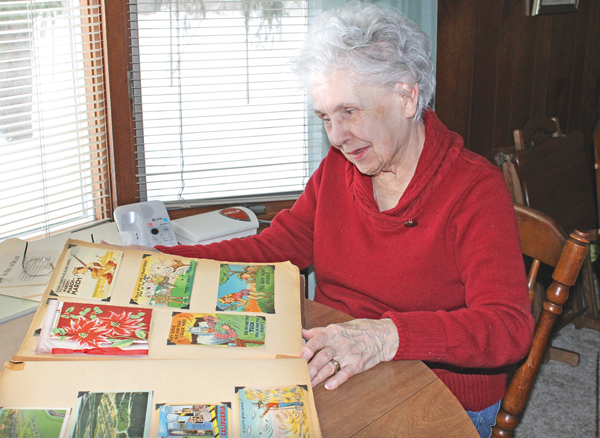 Shirley Luther reviews the post cards in one of her scrapbooks at home. She has long been active in the Grand Island Historical Society, giving talks and maintaining meticulous files, photos and newspaper clippings on town history. (Photo by Karen Carr Keefe)

In Luther's early years, the Island had 11 one-room schools that were eventually combined into three two-room schools. The No. 5 School at Bush and Baseline was for grades 7 and 8; School 2 on Staley Road housed grades 5 and 6; and School No. 9 at Whitehaven and Baseline had grades 1 through 4.

Shirley Luther walked all the way to No. 9 School with her cousin, Bud Long, and her brother, Ralph. In winters, they trudged through snow that Luther remembers as being deeper than Islanders usually see now. There were fewer houses to block the drifting of the snow. Grace Williams from one of the Island's founding families used to bring students from the south end of the Island in her car to No. 9 school.

Veronica Connor, for whom Connor Middle School was named, came to the Island in 1936 and eventually became supervising principal of all Island schools. Shirley Luther was one of 100 students who joined Connor in moving to the new Sidway School when it was completed in 1937. It had only four rooms when it opened.

There were only two big churches on the Island before the bridges: St. Stephen's and Trinity Evangelical, which was, at the time, the German-speaking church. Other small churches included the Emmanuel Chapel, Mary Star of the Sea and the Congregational Church, Luther said. The post office was in Tucker's Store in Ferry Village. Telephone service was via party line, and when another call came through while you were talking, operator Helen Staley would tell you, "Hang up, honey!"

"All of us lived on farms. My dad, at the time, didn't have a job, and I don't know how we survived, really," Luther explained. "My uncle had the farm. He gave us milk and eggs," she said. "My aunt taught me how to cut up chickens - how to pluck the feathers and how to cut them up and clean them. We used to have to candle the eggs in a little box and see if there were any cracks in them; if there were, of course, you couldn't use them. And then everything was packaged up and taken to Buffalo to sell."

When the ferries didn't run

"In 1933, the river froze over, and neither one of the ferries could run, but down at the north end of the Island, we finally could get through - and I've got a picture of Elmer Kaegebein and me and a few others loading the scow," Luther said. From there, the goods were taken to the LaSalle area of Niagara Falls to sell, she said. But Islanders were marooned for a few days without any way to get off the Island.

At that time, there also was a Civilian Conservation Corps camp near where the north bridge is now. The men who were there helped establish the state park at Beaver Island.

In the 1920s during Prohibition, there was "a lot of smuggling" of whiskey and rum along the West River from nearby Canada, Luther recalled. Her father was a deputy agent enforcing the law. She said, "My dad had a gun and a billy club in a desk drawer we didn't dare touch!"

"We were glad when the bridges came and opened things up for everybody and everybody discovered how nice Grand Island is," Luther said. "So I hope we continue to be a grand place to live."