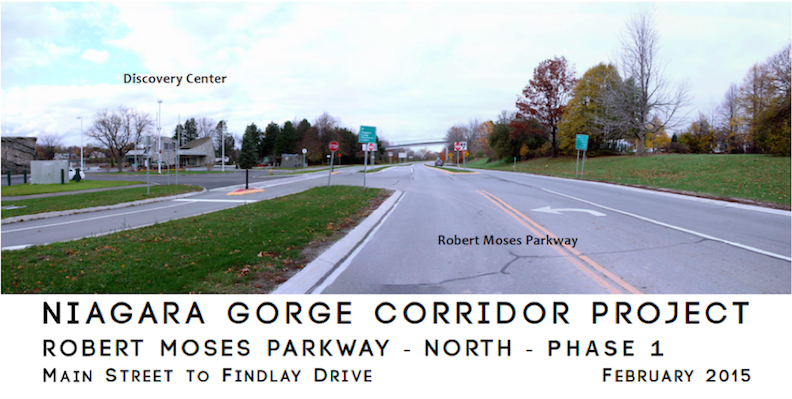 Pictured is the Robert Moses Parkway near the Discovery Center in Niagara Falls. Click for a larger image. (Photo courtesy of Parsons, USA Niagara)

Consensus reached in closing parkway from Main to Findlay, keeping remainder of parkway to Youngstown intact

A hybrid of the three viable Robert Moses Parkway North redesign alternatives was presented Thursday to residents, local business and tourism leaders, and elected leaders inside the Conference & Event Center Niagara Falls. Phase one of the Niagara Gorge Corridor Project calls for the removal of the parkway from Main Street to Findlay Drive in Niagara Falls. The remainder of the parkway to Lewiston and Youngstown would remain as it is now.

Whirlpool Street would become the new connecting point to the parkway. Traffic would be directed in a manner that would highlight downtown tourist attractions, including the Aquarium of Niagara and the Niagara Gorge Discovery Center.

"We're looking for your input," Tronolone said. "This is the first of three public meetings. We have the first inklings of the drawings that we're looking at in this section of the (preliminary) design."

"We want you to look up close at the drawings," he said. "Ask questions ... give us your comments and suggestions. Tell us what assets that you want us to focus on as we move forward."

"At this point in the process, we're looking to get a sense of what the public thinks will work best," said USA Niagara President Christopher Schoepflin. "Although there will be additional opportunities to weigh in as we move forward, the concepts presented today already illustrate that a truly unique and beautiful setting is possible along this section of the gorge - which should create vast public space and new recreational activity here."

One overarching design alternative - what is referred to as a "Build Alternative" - is being evaluated in this process. In addition to demolition of the parkway and its associated expressway components between downtown and Findlay (near DeVeaux Woods State Park), the proposal advocates reconstruction of Whirlpool Street as a conventional street to provide all vehicular access in this area (with the addition of pedestrian, bicycle and landscaping enhancements); natural restoration of reclaimed former parkway lands along Niagara Gorge; and the creation of a trail network along the gorge and connecting to adjoining neighborhoods.

Parsons presented a number of options regarding more localized components of the project, including how Whirlpool Street might tie into existing roads at either end of the project area, how trail networks could possibly be aligned, and how "gateways" into the gorge area may be enhanced. These were organized into the three concepts. The components of each concept would be largely interchangeable.

State Assemblyman John Ceretto was pleased with the presentation. He said it represented the best path forward.

"Absolutely, because the public has been involved in the whole process," he said. "As you talk about the different plans, pretty much the point that we are right now with the parkway, the majority of my constituents and the people in this area, this is what they want to happen.

Around the time the scoping process began, a debate arose between local environmental groups and members of the Niagara River Region as to whether the parkway should be restored/repaired or removed. The former said removal would yield positive results in re-establishing greenspace and creating an ecotourism market. The latter feared parkway elimination would cripple the Lewiston and Youngstown business districts.

Ceretto said phase one of the hybrid plan would benefit both the City of Niagara Falls and the River Region.

"For the towns that are north of the City of Niagara Falls, there's still that road," he said. "So you still have access to downtown Niagara Falls. ... You have that continuity of a road. But yet you're expanding the Niagara Falls State Park."

"It's all a win-win situation," he said. "It's a great thing to have happen here. Personally, I feel like I wish that it could happen tomorrow. But there's a process."

Ceretto suggested a revamped Whirlpool Street would be "something like Center Street in Lewiston."

He mentioned Gov. Andrew Cuomo's interest in rebuilding Niagara Falls, and the work done in Buffalo to enhance Canalside.

"Now it's our time to shine," Ceretto said.

"Everybody comes here for the falls," he said. "That's the most important aspect of this area. As somebody who lives in Lewiston and represents Niagara Falls, I've always felt, for years, that if Niagara Falls moves forward, the whole area's going to take a bigger step forward."

Old Fort Niagara Executive Director Robert Emerson said, "I think the phase that they talked about today has achieved a consensus. I think everybody is in agreement that no one likes the parkway as it's currently configured. What I saw today - and I haven't studied all the details - I thought it looked like a good compromise. I hope that when things get down to the detail level that they'll think about signage and traffic signals and cycles and things like that.

"Our main interest, of course, at Old Fort Niagara, is to make sure that visitors to our area have a seamless route to Lewiston and Youngstown. That's really what we're interested in seeing. I don't see anything in the plans that, if handled properly, wouldn't support that idea."

Not everyone was pleased with the presentation.

Bob Baxter of Niagara Heritage Partnership said, "I am disappointed that the option of removal down to the city line was not considered. As well as the potential for regional ecotourism market."

With regard to funding the project, Congressman Brian Higgins said the New York Power Authority has the fiscal means to finance it.

Steven Gosset, manager of media relations for the New York Power Authority, released a statement that read, "NYPA has been a willing partner for all aspects of the Niagara Gorge Corridor Project. That's why we committed up to $2 million for an engineering and environmental review for this section of the Robert Moses Parkway. When that review is complete, we will continue to work with other federal, state and local stakeholders that have been part of this process to determine next steps."

The final public scoping report yielded three design alternatives (labeled Nos. 3, 4 and 6) deemed worthy of further study in the design and agency review phase of the project. Alternative No. 3 called for a partial reuse of the parkway. No. 4 suggested a meandering partial park road, while No. 6 proposed removing the parkway.

The main stakeholders - USA Niagara, New York State Office of Parks, Recreation and Historic Preservation, New York State Department of Transportation, NYPA and the City of Niagara Falls - signed off on advancing these three concepts, which form the basis of the hybrid plan offered Thursday.

The informational meeting is part of a design report/environmental assessment process, required under federal and state laws, to publicly evaluate the potential social, economic and environmental effects of the project. The preliminary design and environmental review tasks are being done by a consultant team led by Parsons' Western New York office.

Land survey and preliminary design work began in August. That process is anticipated to be completed with formal federal/state design approval in early 2016. Formal design approval would permit the project to move forward into a final design process and, ultimately, go out to bid for construction.

Comments and suggestions on the project may be submitted until March 31 to be considered in time for the next round of public review. Remarks may be emailed to [email protected] or mailed to: Niagara Gorge Corridor Project, care of Parsons Transportation Group, 40 La Riviere Drive, Suite 350, Buffalo, NY 14203.

The next public information meeting is slated for mid-summer to present all components of the design and estimated costs for the "Build Alternative."

Joshua Maloni contributed to this article.

Note:  Once on the website, scroll down to "Robert Moses Parkway - North Segment - Preliminary Design: Phase One - Main Street to Findlay Drive"