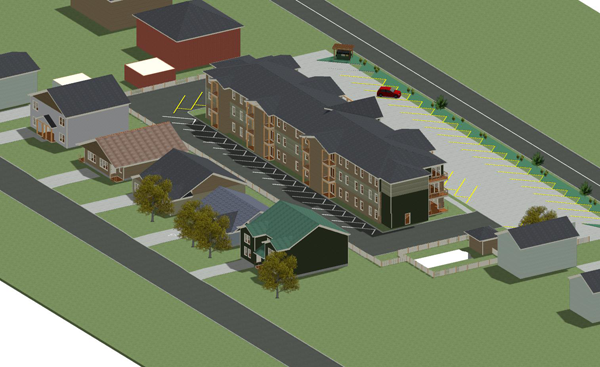 It could be a busy spring in the Village of Lewiston.

The Planning Board received designs for three ambitious projects Monday: One proposal calls for the demolition of the former Fairchild Manor Nursing Home to make way for a new, three-story apartment complex off Onondaga Street. A second proposal would convert the Center Street unit between Grandpaws Pet Emporium and The Brickyard Pub & B.B.Q into an art gallery and rock 'n' roll tribute. The third proposal could be a fast food restaurant next to the A-Plus minimart.

Construction on one or all projects could begin in just a few weeks - when the weather breaks. Each needs final approval from the Village Board of Trustees before shovels could hit dirt.

All plans are conceptual.

Orchard Park developer James Jerge and his architect, David Giusiana of Lewiston's Giusiana Architects & Engineer, returned with a new plan for 765 Fairchild Place - the former Fairchild Manor Nursing Home. This one calls for knocking down the existing structure and building a 36-unit apartment complex, as well as five lots, which could be converted into single-family or duplex units.

The two presented a plan in July to convert the existing building into a multifamily development. Giusiana said neither Jerge nor the Fairchild neighbors were overly thrilled with that idea. 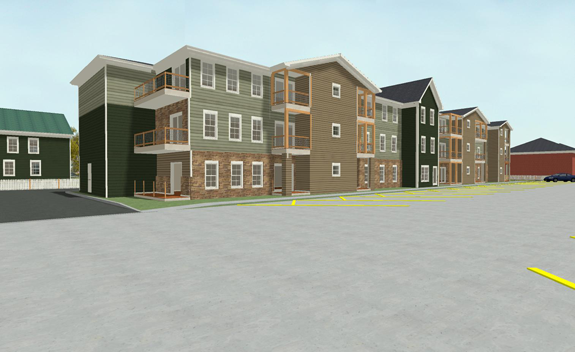 Pictured is a rendering of the south side of a proposed three-story apartment complex facing Onondaga Street. (Image courtesy of Giusiana Architects & Engineer)

"The whole time Jimmy's been trying to respond to everybody; our existing code; the neighbors at Fairchild and all the other adjacent neighbors; his own finance people; just the general mass of the world affecting a decision-making process that goes into this," Giusiana said. "Just talking about the Fairchild neighbors, I think the only way to satisfy them - and this is actually the result of a comment made by Trustee (Nick Conde) - his idea would be tear the thing down and put all single-family houses on it."

Giusiana said that would be cost-prohibitive without the apartment complex, which would be built behind the five lots.

In total, the new subdivision would cover about 1.6 acres.

Giusiana said the five units, if built out, would be in keeping with the houses on Fairchild Place. Jerge said he didn't know if he would build homes or just sell the parcels of land. He said he might build two bookend units to provide prospective buyers with an idea of what could be done with the parcels.

With regard to the apartments, Jerge said the goal would be to attract seniors. Pricing would reflect that objective.

Looking at the overall project, Planning Board Chairman Norm Machelor said, "It would be an improvement." He and his colleagues voted to accept a first submission.

Niagara Falls attorney John Bartolomei has acquired 424 Center St., which was most recently Susha Shoes, and plans to expand the building up toward the road. Giusiana presented a plan for this project, which calls for an art gallery on the building's west side and a rock 'n' roll memorabilia display on the east side.

The one-floor building would be two stories tall to accommodate large-scale artwork from Western New York artist Philip Burke. Bartolomei has several Burke pieces inside his Buffalo Avenue office, and the artist's drawings have been prominently featured in Vanity Fair, Rolling Stone and Time magazines.

The other half of the building would display Bartolomei's late son's vast collection of music memorabilia.

The Planning Board approved this project. 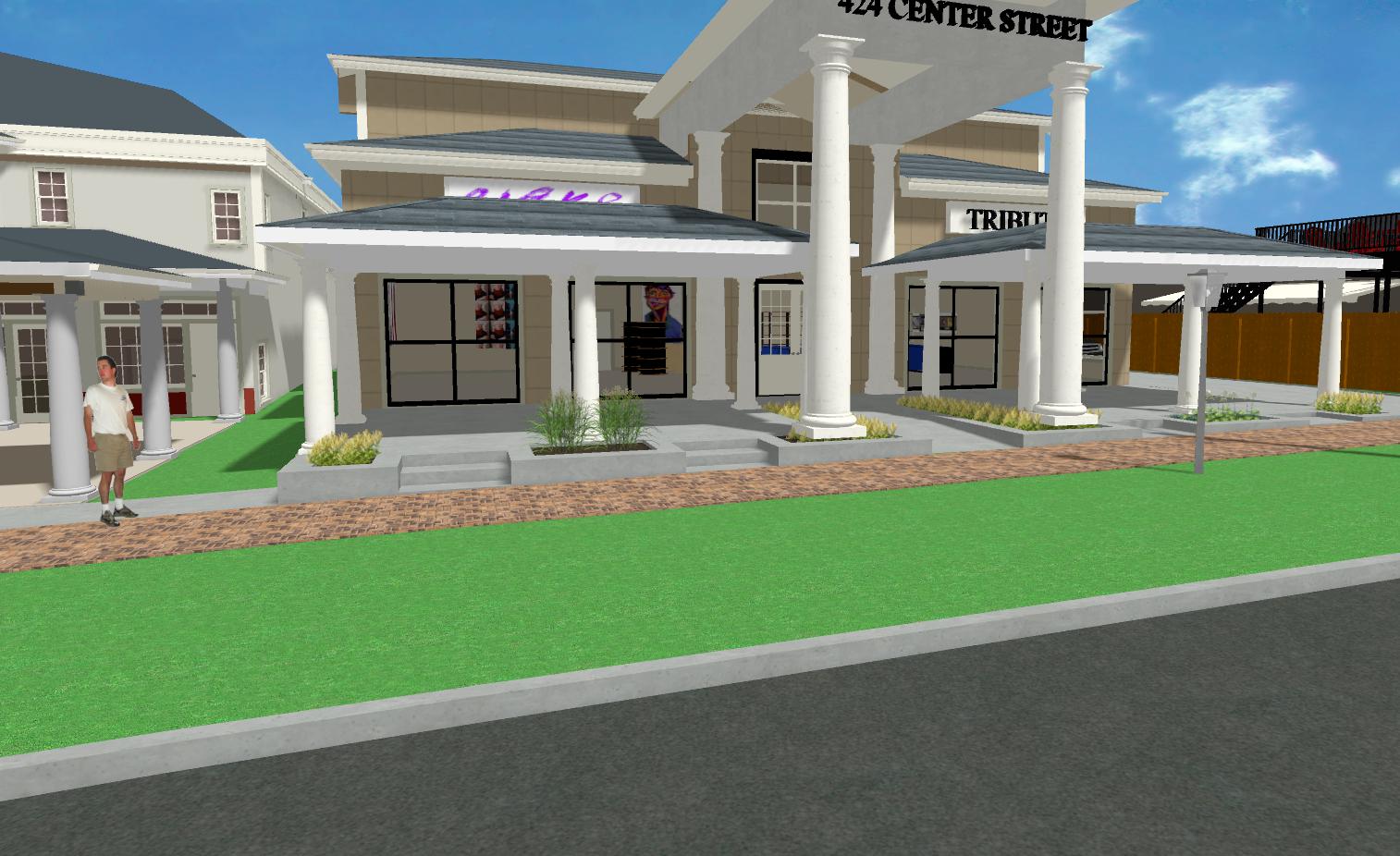 Shown is an artist's rendering of 424 Center St. Art gallery to the left, tribute to the right. (Image courtesy of Giusiana Architects & Engineer)

The Planning Board received an update on Emery Simon's 860-870 Center St. parcel, which has been vacant since the Piper Law Office (aka "Little Blue House") was wheeled into Academy Park in 2009.

Lewiston architect James D. Fittante of Fittante Architecture P.C. presented a conceptual drawing showing the skeleton of a restaurant with a front patio, 22 parking spaces and a two-sided drive-thru.

The drawing seemed to suggest a fast-food restaurant (national chains are reportedly interested), but that's not set in stone.

"We have been discussing a series of possible developments (a restaurant venue, a bank, just to name a couple) that we could place on the land," said Christina Crane, manager of new business development at Simon Construction Co., after the meeting. "The development idea that we have been closely exploring is putting in a fast food restaurant. We have been researching this for quite a while and feel that it would be a great option for the area and our community.

"We want to continue to enrich Lewiston and add to its value. Restaurant options are still being discussed and researched, as we are in the early stages of development. Every detail along the development is an important one, and we feel that keeping the community informed (just as we did with the Lewiston Stone House's development) is beneficial."

Planning Board members expressed concern over what Joshua Krupp called Center Street's "pinch point." The area where two lanes become one is right in front of Simon's property. The board was leery of inviting fast food patrons to drive in and out in between merging vehicles. Or, even worse, drivers backing up out of the parking lot and onto the street.

"It's a problem," Machelor said.

"The entrance and the exit ... is so close, and it's right where the road narrows," Planning Board member Anne Welch said. "That's the problem I'm having."

"How many times have you come to that light in front of Tops (at Center and Ninth streets - right before the merge), and somebody's in the right-hand lane trying to race you," Krupp said.

What's more, the parcel of land is a flat dirt mound that leads to a steep hill down to Onondaga Street. Machelor said he wants reassurances the fill area could hold a building, let alone an eatery with drive-thru and 20-plus parking spaces. Village Building Inspector Ken Candella said Simon would have to complete an engineering study on the back bank.

No action was taken on this proposal.