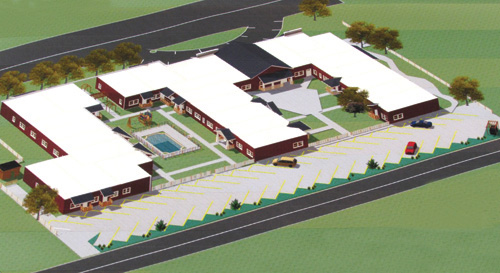 Orchard Park developer James Jerge, his architect, David Giusiana, and his project consultant, Robert Savarino, provided an update on 765 Fairchild Place - the former Fairchild Manor Nursing Home - at Monday's Village of Lewiston Planning Board meeting. Jerge told a dozen residents and three board members, "We never intended, ever, to try to shove a project down anybody's throat when we came here two months ago."

He said his team has taken the past two months to reconsider the estimated $4-$4.5 million project and its effects on the neighborhood.

In the spring, residents expressed concern about additional parking on Fairchild Place. Moreover, they said they were worried the living quarters would be subsidized housing.

Giusiana presented a sketch of what the nearly 1.6-acre site could look like in future months as a multifamily development.

Several notable changes were evident, as shown in the picture. Namely:

"After the last conversation with a lot of the residents in the area, a very large concern was (about) doing anything more to densify Fairchild," Giusiana said. "So we've addressed those concerns and have removed all the parking other than the existing curved turnaround that is there now. As you know, there is ability to park some cars on there. We're going to utilize that in the same way that's it's been used historically.

"The rest of the drive would be open for people to be able to drop people off, pick people up, and still pass through."

•The property lost one unit on the Fairchild Place side so as to divide the building into two large sections.

Giusiana said village trustees offered this suggestion to "break up the long, institutional look of the building."

•Each of the 27 townhouse units has a covered porch. The one- and two-bedroom dwellings are between 710- and 1,190-square-feet.

•Extensive courtyard and exterior work is planned, with the intent to build a pool, as well as playground and recreational areas.

Savarino, of RAS Development Co. in Amherst, said, in no uncertain terms, the multifamily project would not be subsidized housing.

Jerge said each "upper-end luxury" unit would be rented, its tenants would be thoroughly screened, and its rent would range from $950 to $1,400 per month.

"This is not student housing," he said. "This is not going to be turnover apartments where, you know, we're bringing folks in here because we're trying to just take your rent money and fill it up."

The speakers said they expect to see empty-nesters and age 55-and-over inhabitants, but a market study is being conducted and no one will be intentionally excluded.

"I'm all for progress. This I can accept," said Fairchild Place resident Carol Jacobs. "I feel 100 percent better about this project."

The Fairchild building was erected in 1964 and expanded in 1970.

In June 2011, the state Department of Public Health approved a plan for the nursing home to close and cease operations, and its 75 residents to be relocated. A federal grand jury had indicted former owner Marc Korn on charges of fraud.

Lewiston Properties LLC purchased the property Nov. 9, 2012, from DLZ Capital for $25,000 and payment of back taxes. The building and grounds then went to Brooklyn-based Goldin Management. The total assessed value at that time was $1,662,000.

A condo plan was presented last year, but Jerge said Goldin Management "basically abandoned ... this property" when it deemed the proposal unworkable.

On Feb. 27 of this year, Jerge acquired the one-story building and land from DLZ Capital for $375,000 through 765 Fairchild Place LLC.

"I'm not coming to Lewiston to do (anything) but a really nice project," he added.

The Planning Board took no action on Jerge's project.

Earlier this month, the Niagara County Industrial Development Agency offered Jerge a 15-year payment in lieu of taxes agreement pending project approval from the Village of Lewiston Board of Trustees.

Savarino said the IDA PILOT would make renovation and "adaptive reuse" of the building possible.