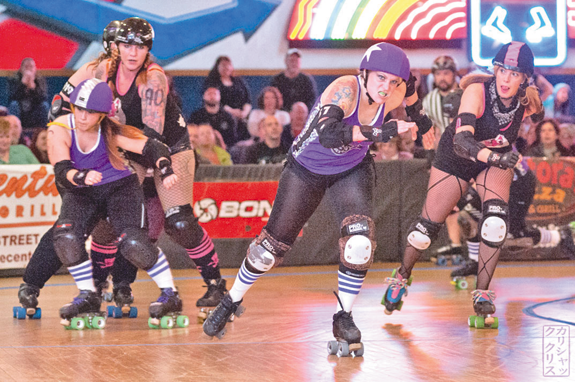 A 2014 roller derby match between the Alley Kats and the Devil Dollies. (photo by Chris Kalisiak/Queen City Roller Girls)

Roller derby: It's kind of like a hard-core sorority.

At least, that's how North Tonawanda resident Melissa Heft-Kalisiak describes her time with the Queen City Roller Girls, the all-women roller derby team that started in Buffalo nine years ago.

It's like a sorority because "I've met some people I know I'm going to be friends for life with through here," she said. Of course, she added, "I love the athleticism of it ... it's allowing me to be active in a fun way."

QCRG is made of four teams, the Alley Kats, Devil Dollies, Nickel City Knockouts and Suicidal Saucies, as well as the Lake Effect Furies, the league's travel team, which is ranked 36 of 225 teams by the international Women's Flat Track Derby Association.

It was six years ago that Heft-Kalisiak, known better to her roller derby "sisters" as HerHeiny Granger (she's a self-described Harry Potter fan), joined the organization. Now she skates for the Devil Dollies and the Lake Effect Furies.

A newer recruit from Niagara Falls, Heather Paul (skating under the name PaulverizHer), joined the Alley Kats last year. She's currently the team's assistant captain. Much like Heft-Kalisiak, Paul said her favorite thing about roller derby was the camaraderie.

"We all are competitive on the track, no matter who we play or whatever team it is, but then off the track at the after party or even at league practices, everyone's willing to help everyone," she said. "It's just like an extension of your own family."

The two women shared similar opinions of the sport, but got involved in markedly different ways.

Paul, on the other hand, had never even seen a bout before she joined the Roller Girls. Rather, she was looking for a team sport to join and got sucked in by the tried and trusty tool of all millennials: the Internet.

"I just happened to Google it," Paul said. "And I found it and I went and I stayed."

Of course, there was more to it than that. She said she was looking for "something different ... something that was fun but aggressive and competitive at the same time."

As for the upcoming season, Paul said, "The Alley Kats are rebuilding and working on their team and we are really excited for the season, can't wait for it to start. We have a lot to show the league and everybody else."

The 2015 season is a notable one for the whole league, though. After eight seasons at the Rainbow Roller Rink in North Tonawanda, QCRG is moving to a new location, Buffalo RiverWorks, a multi-purpose venue with a track built specifically for roller derby.

Heft-Kalisiak said the new venue was a step up not only for QCRG, but for roller derby in general.

"Travelling with the Furies, you see these different venues - a lot of little rinks, or you're in hockey arenas. It's really poor production value, things like that," she said. "But here (at RiverWorks), it's a show, it's a sporting event you go to. It's exciting."

For Heft-Kalisiak, the upcoming season is especially exciting: it's her return to the skates after sitting out the last season after a pregnancy - what she jokingly refers to as "the nine-month injury."

The 2015 season opener is the Suicidal Saucies vs. the Nickel City Knockouts on Feb. 6, at RiverWorks, 359 Ganson St., Buffalo.