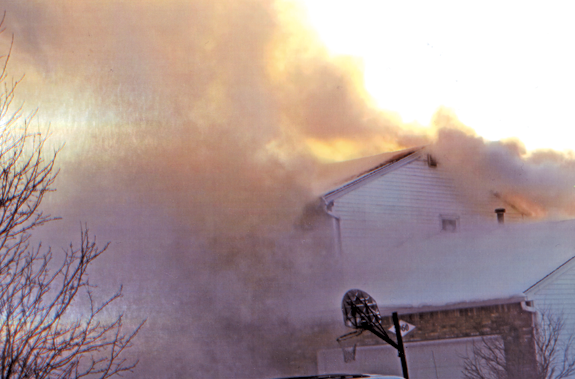 Heavy smoke pours from the roof area as Grand Island Fire Co. units arrive on location to a fire on Baseline Road.

•Taken from the Jan. 16 Island Dispatch

Article and photos by Ray Pauley

At 4:24 p.m. on Friday, Jan. 9, Grand Island firefighters responded to a report of heavy smoke coming from the Baseline Road residence of Brian Wylke, which had been discovered by an alert neighbor.

Fire Chief Matt Osinski stated that engines Nos. 3, 4 and 5, ladder truck No. 6 and fire suppression crews encountered "intense" heat and smoke conditions upon gaining entry. Although the fire had a considerable head start, search and rescue teams led by Assistant Chief Omar Sortino were able to save several pets. The occupants were not home at the time, however.

Nevertheless, the fire was knocked down and under control by 4:59 p.m., with damage estimated at $150,000 to the structure and $100,000 to the contents. Although the fire originated in the first floor kitchen, spreading upward and outward, an exact cause remains under investigation by the Grand Island Fire Co. and Erie County Sheriff's Office.

The Kenmore, Sheridan Park and City of Tonawanda volunteer fire departments provided mutual aid assistance during firefighting operations. One Sheridan Park firefighter was treated at the scene for respiratory distress and transported by ambulance to Kenmore Mercy Hospital for additional medical attention.

Osinski also noted that serious weather-related obstacles had to be overcome by working firefighters. Two Baseline Road fire hydrants were found to be frozen and inoperative but, fortunately, an alternate water source was located nearby on Jeffrey Drive, where a critical hydrant linkup was quickly established.

All participating units returned to service by 6:48 p.m. after extensive overhaul was completed. 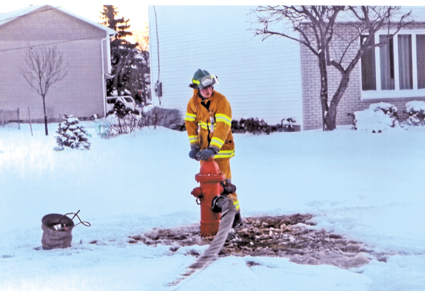 A successful hydrant hookup was made on Jeffrey Drive after two hydrants on Baseline Road were found to be inoperative. (photos by Ray Pauley)