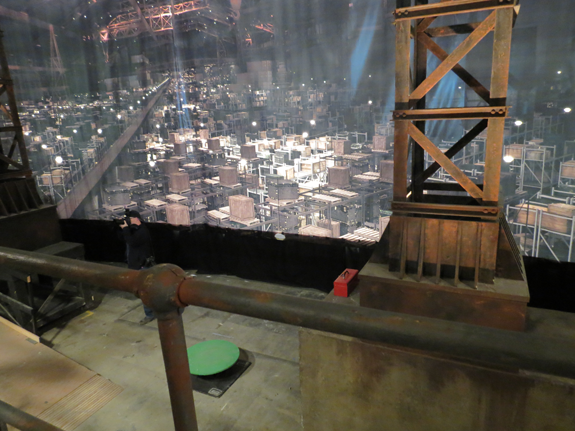 A look inside the Syfy Channel's "Warehouse 13" set. (photos by Joshua Maloni)

What do "Suits," "Beauty and the Beast," "Orphan Black" and "Defiance" have in common?

They're all filmed in Toronto.

At a time when New York is trying to capture a larger piece of the Hollywood pie and attract more productions to the state, several top-rated TV shows are currently filming just 90 minutes away from Western New York. Others, including "Covert Affairs" and "Warehouse 13," recently wrapped production in "The 416," where film and television is a billion (with a "B") dollar industry. 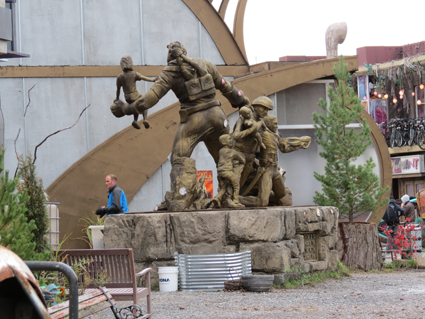 A look at the Syfy Channel set of "Defiance."

Eric Jensen, manager of the Toronto Film and Television Office, said, "Toronto has been alternating with Vancouver as the third busiest center for film and production consistently over the last decade behind New York City and Los Angeles, and we have had a film commission since the '80s.

"Toronto is what is considered a 'full-service' production destination with state-of-the-art production infrastructure, in the form of Pinewood Studios, Cinespace Studios and others, while also offering some of the world's best post production facilities, well-stocked and cutting-edge industry suppliers like Whites, PS and others, and some of the best crews to be found anywhere. Many jurisdictions would be lucky to have a handful of 'A-list' crews, while Toronto proudly has 30 such production crews."

Piper Perabo, who starred as Annie Walker for five seasons on the USA Network's "Covert Affairs," said, "There's two things that I've always really liked about Toronto: First of all, the crews are so good here. They make so many television shows and films here that it's not just, you know, sometimes when you film outside of L.A. you're working in a city where maybe they're less experienced making film and TV. But in this city, there's so many talented people, so it's really fun and easy to work here.

"And then, also, it's a really ethnically diverse city. So for a show like 'Covert Affairs,' where we're traveling all over and, sometimes, you know, we're doing a scene that's supposed to be set in a bar in Turkey, we can find 40 Turkish people for the background."

She added, "There's always somebody. No matter how obscure the language, Toronto has someone here who speaks it fluently; can tutor me; you know what I mean? Tell me all about what it's like to be there, and I think that's really cool for a show like this."

Saul Rubinek, who played Artie on five seasons of "Warehouse 13," said, "Toronto, of course, is ... really kind of wonderful. (It has) various looks that could be anywhere in the world. So we've been able to shoot London, Paris, Rome, different parts of the United States, all in and around Toronto."

"Warehouse 13" showrunner Jack Kenny said, "One of the reasons I love shooting in Toronto ... (is) this city affords tremendous variety of location. The farthest we've gone from the city is Niagara Falls, to shoot an episode that took place in Niagara Falls. That was the only reason we went there."

Jaime Murray, who was a recurring guest on "Warehouse 13" and now stars in "Defiance," said, "Toronto's a beautiful-looking city, but it's also one that could translate well for Europe. It can translate for America. Then you go out of town, the countryside is just beautiful."

"On this show ('Defiance'), there are parts of Toronto that we go to that look otherworldly," she added.

Jensen said, "Toronto is the most ethnically diverse and (one of) the more culturally rich cities on the planet."

It's also a fun place to explore.

"There is no end to the theater, live music, restaurants and other entertainment available here," Jensen said.

"It's a great cosmopolitan city," Murray said. "I mean, there's a lot going on. I've never seen a city with so many condos going up. It's very vibey, and the food is unbelievable."

"It's just the best ingredients," she said of the city's "farm-to-table" cuisine.

"Defiance" star Julie Benz said she was surprised at Toronto's many offerings.

"Oh, I love Toronto," she said. "I had a great time when I was there. I got to go to a TFC game. I went to a Marley's hockey game. They put me on the Jumbotron and I got to lead a cheer, which is pretty awesome. I was like the biggest tourist in Toronto the whole time we were there.

"My husband and I, we ate our way through all the great restaurants. So many great restaurants in Toronto. We made a lot of friends outside of work and just had a blast. There are so many great dog parks, and my dogs were with me, so I spent a lot of time in the dog parks. And I just - it was such a great city to be in, and especially in the summertime. There seems to be a festival or a fair going on every weekend. And we hit everything.

"And the city really welcomed us there and really made us feel like it was our second home away from home, and that we really belonged. And it was as great experience."

"Smallville" and "Being Human" star Sam Witwer said, "I love Toronto. It's great. Every time I'm here, I feel like I don't have enough time to actually see the city." 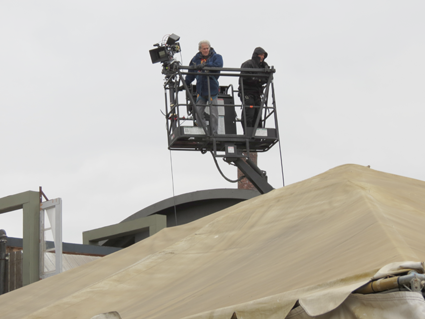 A camera crew works on the set of "Defiance."

"I like Canadians. Who doesn't like Canadians?" she said. "It's amazing; they're the friendliest people on earth. It's a great city. It's really - we really enjoy it. I have two kids, so it's a great city for families. There's so much to take advantage of culturally, but it also just has - it's a really comfortable city to live in, and then you can also have a lot of fun when you go out as grownups. ... It's great; it's really nice. And ... we're really lucky, you know, to have this - to have our Canadian crew. They're awesome."

Speaking of her on-set team, Murray said, "Everyone's there to get a job done, and there's a good sense of humor and camaraderie on set with the crew."

"Our crew is extraordinary, and they're all from the city," she said. "That's the real unsung hero of this whole (thing)."

"They work so hard and they're so talented and dedicated," she added. "We have hard-working Canadians."

Jensen said noted film director Guillermo Del Toro has "spoken of the professionalism of the crews, the quality of the production spaces, and the livability of this city as a whole." Del Toro directed the pilot for "The Strain," which shoots in Toronto.

"It is the combination of these attributes that continues to rank Toronto amongst the world's great cities," Jensen said.

He added, "All of our creative industries work collaboratively to provide a fulsome, rich and memorable cultural experience for all of our visitors and our residents who chose to avail themselves of what this city has to offer."

Since taking office in 2010, Gov. Andrew Cuomo has worked to bring more productions to New York. His office said applications for 183 film productions were submitted in 2013 and included 124 films, 33 television programs and 26 pilots. These projects were expected to generate a direct spend of $2.11 billion in New York; collect a projected $477 million in credits; and hire an estimated 128,165 actors and crew for the 183 projects submitted.

In 2014, "Once Upon a Time" actress Sarah Bolger filmed "Emelie" in Western New York, while Tarantino favorite Michael Madsen and veteran screen actor Eric Roberts participated in scenes in and around the Niagara Falls Police Department for the film "Q-4: Dream Corporation."