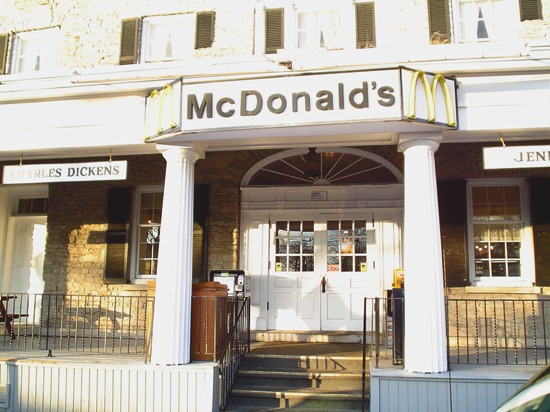 Shown is a photo of the Frontier House McDonald's before it ceased operations in 2004. (file photo)

Sentinel poll: 71 percent not in favor of McDonald's in Village of Lewiston

Ten years ago this month, McDonald's Restaurant ceased operations inside the historic Frontier House. Ellicott Development CEO William Paladino intends to bring the golden arches back to the Village of Lewiston as part of a mixed-use Center Street plaza. Readers participating in a Sentinel/wnypapers.com poll do not favor a return of the fast-food franchise.

"My friend from Belgium told me one of the things she loved about Lewiston was the 'effort the community put into making Lewiston such a charming village,' " one poll participant wrote. "Tourists and visitors come here to see and experience our charm. A fast-food restaurant does not belong here ... at all! There is nothing 'quaint' or 'charming' about fast food or chain restaurants. No one will come to Lewiston because we have a McDonald's, or Tim Hortons. It will interfere with the aesthetics that our community has worked at achieving for decades."

This person cast a "no McDonald's" vote, as did 71 percent of poll participants. Many said it would be "disheartening" to have a national restaurant chain prominently featured on the village's main street.

Others opposed to the idea wrote:

•"Why would anyone be in favor? A chain restaurant that would take business away from existing village restaurants and detract from 'Historic Lewiston' is absurd! Drive the 10 minutes to Military (Road) and have your fill!

"What a mistake that would be! ... What a terrible precedent you would be setting to allow McDonald's into the village. The greasy smell, the trash, the traffic. I see absolutely no value in allowing McDonald's in the village."

•"I think a fast-food restaurant in Lewiston is a betrayal of the small business owners who made/make the village what it is today: a unique place to live and visit. Please let's keep it that way. McDonald's et al. belong on Maple Road and Niagara Falls Boulevard."

•"There are enough talented, hard-working (local) family-owned restaurants who consistently impress out-of-town travelers and service the needs of local residents."

•"Keep the small town flavor - don't let the big guys come in and take away the small-town charm that exists!"

Almost 30 percent of poll participants favor a return appearance. Some would favor a McDonald's and additional fast-food restaurants.

•"I lived here when we had the previous McDonald's and it was great. It keeps money in the village and gives the youth a job, rather then hanging out at the bars. Why is it we allow every bar known to man in this village, but an actual restaurant that would create jobs we don't want? Plus the village brings enough traffic and congestion on its own with artwork and every festival known to mankind. I don't see how this would bring any more."

•"I look forward to it. We should also have food trucks."

Paladino recently told the Planning Board he's had a hard time selling tenants on his plaza proposal, because of the intended area's unique topography. McDonald's, he said, was OK with the site, which slopes deeply down to Onondaga Street.

Village of Lewiston Mayor Terry Collesano said, "Personally, I would rather see another chain, if it comes down to a chain."

However, "Whatever business comes in this village, as long as they follow the code, and as long as they go along with the requests of the Planning Board, then there's really not much you can do about it," he said. "You can instill in them what you would like to see - what you envision.

"We had a McDonald's here before. The McDonald's wasn't a traditional McDonald's (in the Frontier House). It was something unique. And there's no reason why this cannot be unique."

"I believe Bill Paladino has already stated that you wouldn't see the golden arch that most McDonald's have. He's already - some of the plans he's shown, (it's) not the typical McDonald's building. And, even though we're not pleased with the building that he presented the last time, he did take our suggestions. He is going back, and he is going to redesign - if the McDonald's goes along with it. ... If they go along with it, I can't see any harm in it."

Collesano said he understands some residents are fearful a McDonald's franchise would take away from the village's historic nature and hurt locally owned eateries.

"I can see there seems to be fear in peoples' eyes as to the village crumbling to big names," he said. "But, you know, we went through this many times over the years. Actually, back in 1957, was when this first happened. When (developers) came in and they were going to put in a Loblaw's. ... And the village people were going crazy over it. Well, they built the plaza. That was the anchor store, a Loblaw's. There was a Jay's drugstore, and there was a Marine Midland Bank."

Over the years, other chains have come to Lewiston, including McCrory's, Rite-Aid, CVS, Subway and UPS.

Collesano said residents shouldn't be alarmed about Paladino's plan, which could include a chain drug store, too.

"We have codes, and we have plans that were presented," Collesano said. "They're not up to what the Planning Board would like to see. So, let it play itself out and we'll see. If it doesn't play itself out to our liking, then it won't happen."

Jennifer Pauly, president of the Niagara River Region Chamber of Commerce, said, "The chamber hasn't taken an official stance on McDonald's. We encourage our members to stay on top of the developments."

"We do, however, support our small business," she added.

The Sentinel reached out multiple times to McDonald's corporate media office and did not receive a response.

When McDonald's left in 2004, it had the option to remain in the Frontier House until 2021. It has been widely speculated over the course of the past decade that the business was not as successful as other franchise locations. Toward the end of the chain's Lewiston occupancy, there were many open tables and booths inside the restaurant.

In December 2004, Frontier House owner Richard Hastings said his preference was to have McDonald's remain as his tenant. But, upon reclaiming use of his building, he proposed erecting a 60-room, four-story inn surrounding the structure.

Shortly thereafter, the Village of Lewiston approved Ed and Diane Finkbeiner's plan to build the Barton Hill Hotel. When that happened, Hastings pulled his proposal.

Hastings twice proposed building living quarters above the parking lot. Those plans were stalled in State Supreme Court and then put on the back burner as his son, Alan, who operates The Silo Restaurant, pursued funding options to repair the Frontier House and turn it into a microbrewery.

That idea also has stalled, as Hastings has been unable to find adequate funding to refurbish a building that has sat vacant for 10 years.

Presently, the Village of Lewiston is exploring the idea of purchasing the building.

Lewiston business consultant Stacey Sheehan has worked alongside Alan Hastings in trying to reopen the Frontier House. She said, "I think it's fair to say that the Frontier House is available for purchase. The last few months have yielded a lot of talk (and) loose verbal offers completely unrealistic for such a valuable Center Street location. It's become apparent to me that, despite the unreasonable offers, quite a few people like the idea of being the owner of the Frontier House. Some due to the rich history of the building; some recognize the prime location as a Center Street rarity, affording the last sizeable private parking option in the village.

"People have surfaced who claim to have funds available for development, but have been unable to produce proof of such."

She added, "I think it's important for folks to know that, to this day, no one has presented a serious written offer. At the end of the day, despite its rich history and magical qualities, it is real estate and needs to be handled properly. ... I would encourage all parties interested in purchasing the Frontier House to come forward with a written offer."

Sheehan can be contacted at [email protected].

Paladino is expected to submit a revised development plan in January.