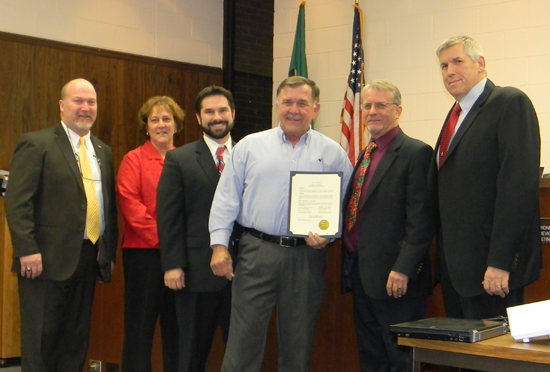 Farmer Paul Bencal (center) was recognized Monday by the Lewiston Town Board for his work on the town's Assessment review Board. Joining him at the proclamation event, from left, Council members Bill Conrad, Beth Ceretto and Al Bax, Supervisor Dennis Brochey and Councilman Ron Winkley.

Town of Lewiston Board receives update on Stella Niagara Preserve

Monday's regular meeting of the Lewiston Town Board opened with a public hearing where comments were sought on a special use permit to allow for a bed and breakfast on Ridge Road, proposed by area pro-golfer Frank Garcia. With no comments heard from the one or two residents on hand, the hearing was closed minutes later and all sat.

The regular meeting itself resumed at 6:30 p.m. and featured a holiday tribute to Paul Bencal, who is stepping down as a member of the town's Assessment Review Board. Bencal, a local farmer who has served as past president for both the state and county farm bureaus, was presented a proclamation by Supervisor Dennis Brochey and the Town Board members for his services to the farming community and the town.

The session went on to feature a presentation from Nancy Smith, executive director of the Western New York Land Conservancy, a nonprofit land trust active in protecting significant properties with conservation value, on the group's ongoing efforts in establishing the Stella Niagara Preserve.

In her presentation and remarks encouraging Lewiston's involvement with the Conservancy as a municipal partner in the $3.2 million venture, Smith spoke of the many intrinsic values of the 29-acre lower river property that is located across from the Stella Niagara Educational Park and Peace Center on River Road.

"It provides an extraordinary benefit for Lewiston residents without the legacy costs," Smith said, noting the site's natural beauty and recreational attributes and value as an ecological sanctuary, as well its historical significance.

"It's the largest private undeveloped property on the river," Smith said. "It's a regional project, perfect for the Greenway."

Specifically, Smith was seeking the town's support as it approaches the Niagara Greenway Commission for an additional $150,000 funding commitment as it moves to complete the final leg of its remaining $600,000 in project costs. Brochey and board members all came out in support of the venture, which is expected to be aired before the Greenway Commission early next year.

At this point the meeting continued with community comments. Paulette Glasgow questioned the Town Board's sidestepping of established procurement policy and bidding procedures - namely the handling of bids and selected firms in the town's ongoing muckland pumps repair project.

"On competitive bidding, the Town Board holds authority over all - highway, other departments and employees," Glasgow said. She went on to question a $7,000 expenditure to O'Connell Electric initiated by Highway Superintendent Doug Janese for emergency repairs on the vertical pumps. "It wasn't procured for the lowest possible price," Glasgow said, noting it was in violation of established state procedures.

Other than an opinion by Town Attorney Brian Seaman that "quotes on a public works project do need to go out to sealed bid," no comments came from Brochey and the board.

Soon after, the board broke for executive session for what was anticipated to be a relatively brief conference call update from County Attorney Gary Abraham regarding CWM Chemical Services and its permit application, still under review with the state Department of Environmental Conservation. That discussion was to go on for well over an hour, and the handful of residents sat, sat and sat. No update from the discussion was to come from the board, however.

With 9 p.m. approaching and most remaining residents now tiring of being assembled for close to three hours, the Town Board moved to act in expeditious fashion on a number of agenda items its still had to tackle. Included were:

•On a motion from Councilman Bill Conrad, the board summarily approved the negative declaration and special use permit sought by Garcia for his Ridge Road B&B.

•The board moved to limit the town's granting of sewer refund credits covering pools to a one-time refill practice after reviewing a resident's letter who had sought repeated credits. It also ruled against a $214 damage reimbursement sought by a resident for frozen pipes.

•The board, hearing Glasgow's earlier comments on its handling of procurements and bidding, elected to table any rebuilding work planned on the remaining older muckland pump until spring. It likewise tabled a resolution covering a micro turbine project for the town's Water Pollution Control Center until next month.

•The board moved for Town Engineer Bob Lannon and Building Inspector Tim Masters to review a DEC-approved renewal request sought by Guard Construction for a Pletcher Road clay mining operation. Noting the town's Environmental Commission's interest in seeking information on violations related to the clay operations, which date to 1995, Councilman Al Bax requested the status update that was summarily approved.

•Hearing comments earlier from an Oak Run resident concerning mailbox damage caused by a town highway department plow, and further comments by Town Attorney Mark Davis, the board decided the town's limit would be $50 for this and all such mailbox replacements for now on.

•The board approved for Lannon to contract with Sierra Environmental on spec work, not to exceed $10,000, related to the town's forthcoming $80,500 demolition project of four asbestos-contaminated structures at Joseph Davis State Park - a removal project begun earlier but not completed by the Steve Reiter administration.

New York State Parks Office of Recreation and Historical Preservation, which is in the process of resuming maintenance control of JDSP from the town, requested the work be completed and paid for by the town before its anticipated take back.

•The town OK'd Finance Director Paul Kloosterman to pursue the online purchase of two obsolete and hard-to-obtain water main meter reader heads estimated to cost $1,000. Kloosterman said the town has an estimated 3,000 households still using the obsolete Trace/Goring meter reader head system and he was seeking a stopgap equipment fix in the event of failures. The town water department is said to be looking into a future full replacement of the older water meter reader heads to the new Orion models. Kloosterman requested that residents check their individual meters and contact the town on the status of their model.

•The board approved a $20,000 transfer request by Councilman Ron Winkley to allow for new laptops for the Lewiston Police in their patrol cars, covering a Niagara County radio equipment mandate. The funding was expected to be covered by unspecified sources. It needed to be finalized by February.

"This is an unfunded mandate thrown at us by the county," commented Deputy Supervisor Sean Edwards.