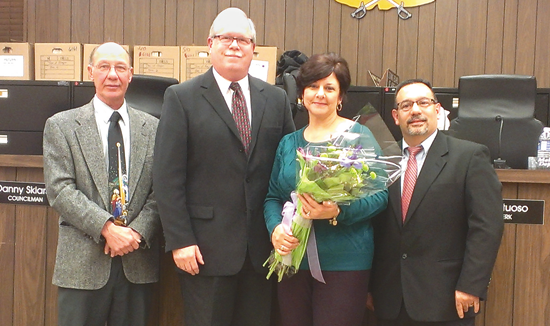 Story and photo by Autumn Evans

The Town of Niagara Town Board closed out its last meeting of the year in what Councilman Danny Sklarski jokingly called "record time."

With little discussion on agenda items and only one public comment, the meeting lasted for just a brief 20 minutes. Councilman Robert Clark was excused from the meeting.

The sole public comment came from Kathy Hall, who spoke about the Belden Center grant recently awarded to the town.

"I just want to say 'Hallelujah' that we finally got the grant that we've all been waiting for," Hall said. "Now we're waiting for the first shovel to go in the ground."

Virtuoso said while there is still paperwork to sign, Supervisor-elect Lee Wallace had already begun meeting with engineers to start the project.

The town has applied for the grant for the past three years, but was rejected previously. After adjustments to the application, the grant was approved this year. It will cover $600,000 of the $2 million required to repair sewage and infrastructure at Belden Center.

"Honestly, that kind of money is an enormous amount of money, and there was a lot of work that went into making that happen," said Highway Superintendent Bob Herman. He called it a community effort, and said it was "not only the town administration, but also the community itself working together to make that come to life."

In other board news:

•The board approved a resolution to install a street light at the corner of Homestead Avenue and Military Road, calling it a "safety concern."

•The board approved a resolution to close out the Witmer Industrial Estates Capital Project and return the remaining funds of about $17,800 to the Highway Department.

•At the end of the meeting, the board thanked Virtuoso for her work as interim supervisor since May, giving her flowers and a commemorative charm bracelet.

"This charm, is what they call it, is an eight-sided sun. It reflects the universal law that life's outcomes are a reflection of your efforts," said Councilman Marc Carpenter. "You have had the opportunity to positively lead our town and affect others these past six months. You have astounded yourself and those around you with your abilities. We would like to thank you for stepping up and taking on this role, and doing it with grace and finesse."

Virtuoso responded, "I want to thank the Town Board for this wonderful opportunity to work with them, and I think together, we're leading the town to a stable, strong position and we can move forward into 2015."