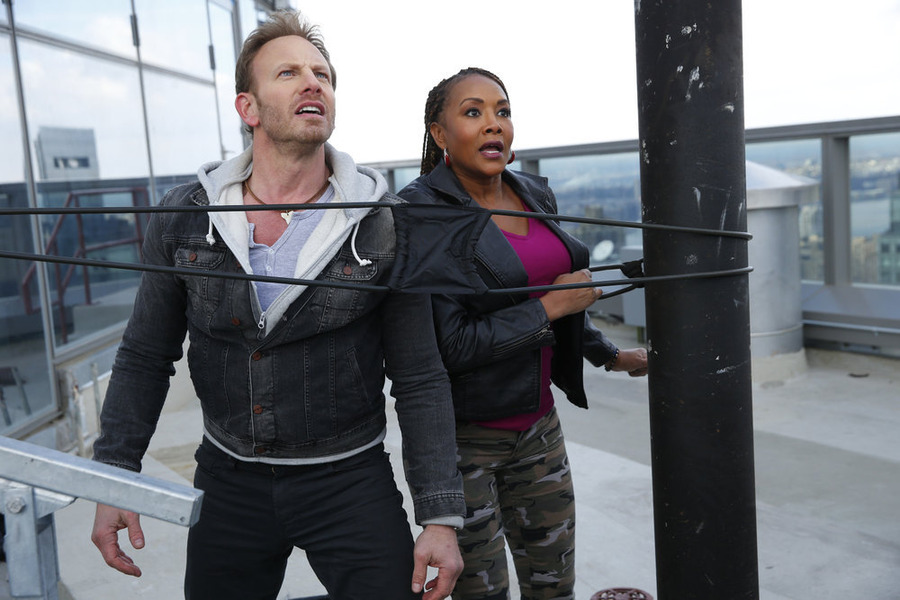 Ian Ziering starred as Fin Shepard and Vivica A. Fox as Skye in "Sharknado 2: The Second One." (Syfy photo by Will Hart)

"Hey, I know that person," is a common response TV viewers have when watching Donald Trump's famous cast members compete on NBC's "The Celebrity Apprentice."

When the seventh installment debuts Sunday, Jan. 4, they might say, "Hey, I watched that person blow up giant sharks in New York City last summer."

Ian Ziering and Vivica A. Fox, stars of Syfy's "Sharknado 2: The Second One," will compete in Trump's reality series, tackling various challenges and raising money for charity.

This time, instead of fighting sharks, they'll battle each other inside "The Celebrity Apprentice's" infamous boardroom.

"I had worked with Vivica before, a long time ago on '90210,' and had a great respect and appreciation for her from that, and seeing her go on to such fantastic successes in the 'Kill Bill' movies and all the other science fiction movies she's done," Ziering told BTS. "It was great to work with her on 'Sharknado'; I knew she was going to bring a lot to the table. I didn't know - when we were both booked for 'Sharknado' - (it wasn't) until we were sitting across from each other in the makeup chair of 'Sharknado' we realized that we were going to be working together in 'Celebrity Apprentice' ... because you're not supposed to talk about it. But, you know, we kind of talked a little bit, and were both very happy and surprised to know that we were both going to be working on 'Celebrity Apprentice' together. It was great. I love Vivica. Such an awesome woman; so fun to work with."

"And for me it was a welcomed surprise to find out that we were then going to do 'Celebrity Apprentice' together," Fox told BTS. "So last year we spent, you know, what? About four or five months straight, almost, in New York? And it was cold, I can tell you that. It was a cold season. But it was good - some days - to see a kind face that I knew, that when it got really tough - and it did get mentally exhausting some days - that just to go over and (be) able to get a hug or just say, 'Whoo,' you know, 'are you hanging in there?' Just to be able to separate. And (I) got to know Ian, really, as a friend outside of a competitor on the show. So I was blessed and very, very happy that we got to do the two projects back-to-back."

Neither project was a pushover. Fending off flying sharks is not for the faint of heart.

Neither is "The Celebrity Apprentice." 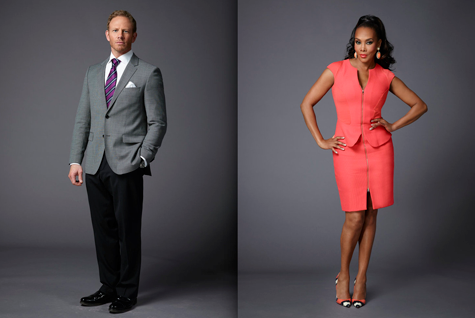 "I asked a couple of people that had been on there in the past from Star Jones to Holly Robinson Peete to Mark McGrath, who we were doing 'Sharknado 2' with ... what was it like. And the first thing that they all said is be prepared to work. So I said ... 'OK, you've got to be mentally tough and physically tough to endure this,' " Fox said.

Ziering, likewise, geared up by researching past seasons and contestants.

"I prepared by talking to a few past contestants: Mark McGrath, of course, because I was working with him right before on 'Sharknado'; (I) spoke to Annie Duke. But on top of that, I also went back and watched every episode of 'Celebrity Apprentice,' " he said. "I wanted to see how the dynamic of the show played out. What things Donald looked for; what things he didn't like; what qualities in people he gravitated towards; what he was adverse to.

"You know, really, you look at it like gang tape and, on top of that, knowing that I had to be prepared for any situation, you know, I looked deep into my rolodex to 1), look for people with money and 2), look for people with resources - and varied resources - because you never know what you're going to have to come up with. You need to pull rabbits out of your hat on this show.

"So I had my - everything organized and categorized like a flow chart, where I needed to go if I had to find something."

"Celebrity Apprentice" castmate and longtime "Entertainment Tonight" anchor Leeza Gibbons said Ziering was "like a machine" in his prep work.

"Talk about organized and strategized, and it was unbelievable," she said. "I kind of was shaking in my boots until like the night before I had to get on the plane and probably should have done that kind of back-up.

"I think all of us, though, regardless of how well prepared you thought you were, or not, it comes down to, you know, taking a deep breath and moving forward, because you don't have time to really think about anything else - you just have to get into action."

"Yes, and like you said, Leeza, the personal growth that you experience is tremendous," Ziering said. "For me, you know, I never thought in a business sense. Being on 'Celebrity Apprentice,' for me, was like getting an MBA at Trump University. Going through the prerequisites and studying all the prior shows and putting together my game and then implementing everything that I'd come to the party with really set my mind spinning, you know?

"Since the show, I've gotten involved in three businesses, because I just found that I could do something - I could do it; I could make it happen. And I'd never even applied myself in this direction, so it's really spurred me on to do things that I'd never done before."

"The Celebrity Apprentice" debuts Sunday, Jan. 4, at 9 p.m. before shifting over to Mondays at 8 p.m. on NBC. 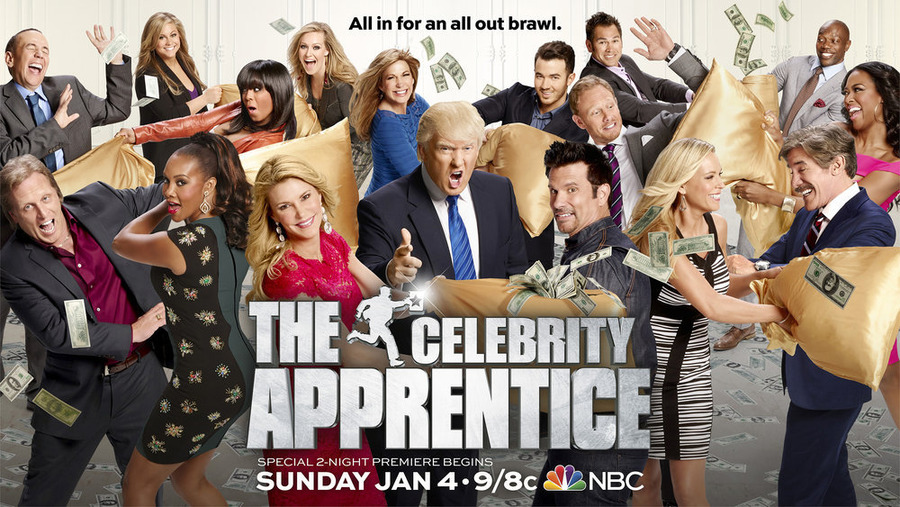 "The Celebrity Apprentice" debuts Jan. 4 at 9 p.m. before moving to Mondays at 8 p.m. on NBC. (NBCUniversal image)