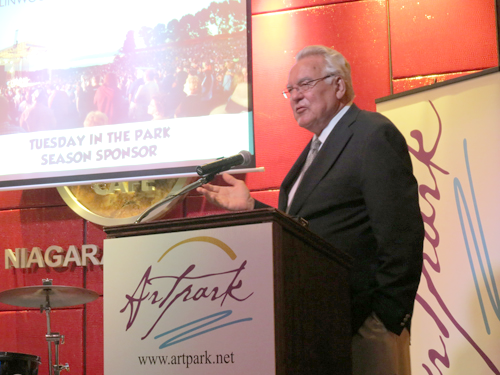 George Osborne is stepping down at Artpark & Company.

Lewiston: George Osborne to retire as president of Artpark & Company

George Osborne announced today he will retire as president in October of 2015.

At the request of the board of directors, Osborne will remain as a part-time management consultant at least through the 2016 season.

In making the announcement, Osborne said, "With Artpark & Company's contract with New York State Parks to manage programming at the park coming up for renewal in 2017, it seems an appropriate time for a change in leadership that will provide Artpark's next executive director the opportunity to participate in the discussions that will shape the future of the park for the next decade and beyond. I am very pleased with my accomplishments at Artpark and am proud of the growth we have achieved over the past 15 years, but I am ready to pass the baton on to the next generation of leadership."

Osborne's creative programming ingenuity ignited a remarkable rebirth at Artpark with new and rebranded concert series, visual art installations, and the return of large-scale musical productions that, all together, drew hundreds of thousands of patrons to the Lewiston park over the past 15 years.

Since coming to Artpark in 2000, Osborne has rejuvenated the venue by creating the highly successful, award-winning "Tuesday in the Park" concert series, working to create a summer home for the Buffalo Philharmonic Orchestra, more than doubling annual attendance at Artpark, and implementing a major capital improvements program.

"In 1999, not long after Artpark & Company assumed operating responsibility from New York state, we were faced with the daunting task of replacing a departed executive director on the eve of the summer season," he said. "In George Osborne, we found a seasoned professional with the vision and focus to undertake a re-imagining of Artpark' s strategy, which balanced deference to historic mission with the pragmatic realities of dramatic funding cuts. George succeeded beyond our expectations at the time and, in my view, is owed a debt of gratitude for his transformational work."

Under Osborne's term as president, Artpark has received eight "Best of WNY Awards" (Buffalo Spree) for concerts and performances at Artpark. He was selected as one of Business First's "Most Influential People" (2012) and again for Business First's "Power 200" Award (2013) and "Power 250" in 2014. In 2009, Osborne was the recipient of the prestigious Buffalo and Erie County "Trailblazers Award" from The Arts Council of Buffalo & Erie County in recognition of excellence, innovation and achievements in the Western New York arts and cultural community, and for demonstrating leadership and progressive thinking that resulted in substantial organizational improvement.

Numerous awards and citations have been bestowed on Artpark during Osborne's term as president.

"George and I worked together for over five years and, throughout that period, he was uncompromising in pursuing the vision and mission of Artpark," said Thomas J. Fatta, chairman of Artpark & Company from 2004-07. "Under his leadership, Artpark realized unparalleled growth and became the new standard for performing arts' venues in Western New York. The impact of his achievements at Artpark created an indelible mark on our region's culture"

During Osborne's tenure, the state park experienced significant upgrades, including the renovation of the Mainstage Theater with complete interior refurbishments, sound and lighting upgrades; and new theater seats and stage renovations. Under the direction of Osborne and the Artpark & Company board, funding was secured for the construction of a new, gated outdoor amphitheater. In 2011, the new amphitheater reopened to widespread acclaim, offering a unique scenic atmosphere.

The original outdoor amphitheater became the focal point at Artpark and drew hundreds of thousands of concert patrons as the "Tuesday in the Park" and "Coors Light Wednesday" series grew in popularity across the region and in Southern Ontario.

Christopher H. Brown, Artpark & Company board chairman from 2007-12, started at Artpark around the same time Osborne did.

"George faced a tough challenge right from the start," Brown said. "He jumped into the situation and started its comeback by restructuring the financial situation in-house and approaching vendors to forgive old debt. One of the things I like and admire most about George is that, though he has a tremendous creative side, he has a knowledge of finance, as well. I have served on many not-for-profit organizations and find this to be a rare quality. As board chairman for five years, George and I worked closely through some pretty tough times. In the first year of my term, New York state was going through a serious budget crisis and Artpark & Company's budget supplement from the state was eliminated. George and I traveled to Albany to meet with state officials and we were able to return with some reinstated funding, which was an essential, and successful advocacy for Artpark at a crucial time.

"One of George's greatest accomplishments was the creative 'Tuesday in the Park' music series that started as a small, local free concert series and has grown into the premier summer music venues in Western NY. Throughout his 15 years with us, Artpark has made major capital improvements that have enhanced the enjoyment of Artpark for the community. A wonderful example is the rebuilt amphitheater that has allowed us to present well-known acts that are enjoyed by all.

George's decision to step down as president is understood, but still saddening. I've had the pleasure of working closely with him over these past years and hope to continue to do so after he leaves that role but continues as a consultant as we look for a replacement who might fill his considerable shoes."

"I have had the pleasure of working with George for the last seven years as board member and the last two as chairman," he said. "Over this time, George has demonstrated tremendous energy and drive to ensure an extremely high-quality experience for Artpark patrons at a very reasonable cost, as well as provide diversity of programming that is unparalleled in Western New York. George has been an outstanding leader, as evidenced by the growth and success of Artpark over his tenure as president. I speak for the entire board thanking George for his dedication and leadership." 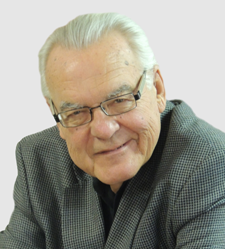