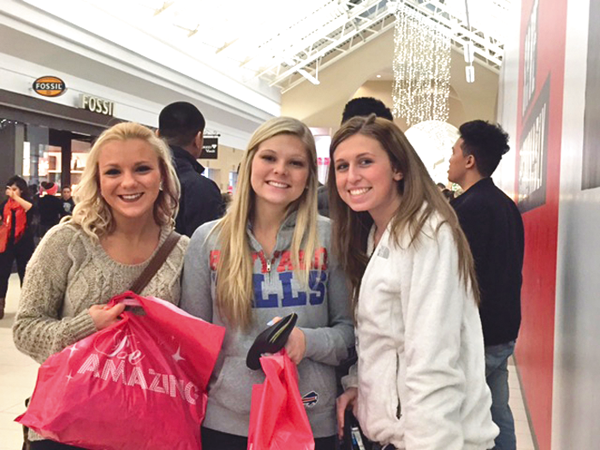 Pictured, from left, Meghan Petracca, Jordan Behringer and Bailey Behringer were some of the shoppers waiting in line getting ready for stores to open Thanksgiving night. (photo by Hayley Evans)

While national analyses report "Black Friday" shopping decreased by 11 percent this year, the Fashion Outlets mall in the Town of Niagara said it was happy with the turnout it saw last weekend.

"We're still kind of tabulating, but we had a healthy population of folks coming in," said marketing manager Michael Powers. "Despite the snow coming in that night, we had pretty heavy traffic and so on."

Though the mall officially opened at 10 p.m. Thanksgiving night, the doors opened at 8, and some stores followed suit.

Others chose to wait until 10, with customers forming long lines outside the doors of the more popular stores for the chance to shop. One of the longest lines was for Nike, but shoppers didn't seem fazed by the wait.

"It kind of figures 'cause Nike's big, but I wouldn't be surprised," said Meghan Petracca, one of the shoppers in line before 10. She said she wasn't looking for anything specific in the store, but figured she might buy some hoodies or Christmas gifts.

Petracca, from Lancaster, said she chose the Fashion Outlets because she figured it would be the least busy mall in the area, but also for its selection.

"This (mall) has more variety, and stuff seems to be cheaper at the outlet," she said.

Of course, some shoppers preferred to wait out the rush, such as Ontario shopper Nicky (no last name given), who visited the mall with her goddaughter. The two were content to wait in recliners for the line to die down at Michael Kors, where the number of customers allowed inside at the same time was limited.

Nicky said starting her "Black Friday" shopping weekend at the Fashion Outlets was a tradition for her.

"We always come here every year ... we love this mall," she said. "We'll go all over the place, but we do come here first before we venture on."

Another Ontarian, first-time "Black Friday" shopper Eileen McEwen, got to the mall around 8:30 p.m. to get an early start. She said she came with her family to take advantage of lower prices in the states, but she was also impressed with the mall itself.

"People are very friendly, and people go out of their way for us," McEwen said. "I just find people very friendly and accommodating. And the service? The service is great."

Still others found their own ways to enjoy the shopping holiday. College student Jack Travers from Niagara Falls wasn't interested in the sales prices.

"If you see something, fine, but I'm not out looking for crazy deals," he said. Rather, Travers was continuing his yearly tradition of spending "Black Friday" looking for the crowds, to "people-watch."

In any case, "Black Friday" certainly drew a diverse crowd to the Fashion Outlets. In terms of shoppers, the draw could have been the mall's recent addition of 50 stores.

Powers said it wasn't clear whether the expansion caused an increase in "Black Friday" shopping specifically, but the mall had been busier in general for the past few weeks.

"Hopefully, people who hadn't seen or been to the mall in some time saw something they liked, and not only did they get their holiday shopping done, but they'll be here as regular customers going forward," Powers said. "We're hopeful that it helps not only 'Black Friday,' but the whole holiday season into 2015." 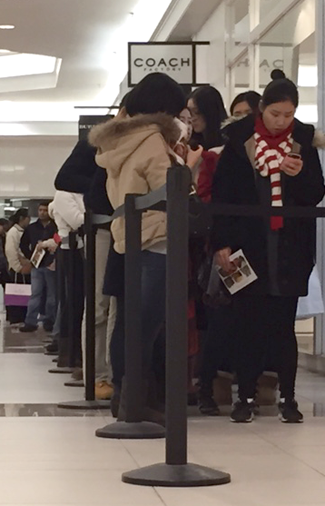 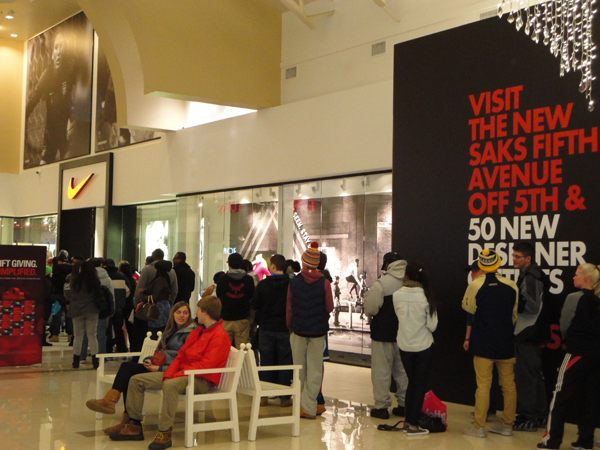