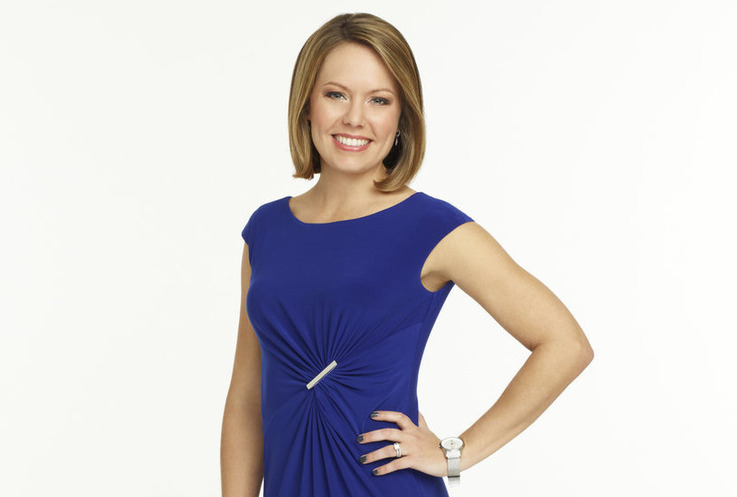 Hour by hour, reports came in last week of residents stuck in their homes or, even worse, stuck on the roads. Massive walls of snow, some approaching double-digit feet in height, made southern Erie County nearly impenetrable.

Fearful of Mother Nature's trap, most people tried their best to avoid the record flurry.

One person, however, couldn't wait to get out into the storm and jump feet-first into the biggest snowbank around.

"It was, from a meteorological standpoint, the coolest snowstorm I've ever experienced," NBC News and "Weekend Today" meteorologist Dylan Dreyer said Tuesday. "To see whiteout conditions firsthand like that, and to just experience it instead of just forecasting for it. Actually, if you're looking at the radar and then to look out your window and just be in it - it was just absolutely incredible."

"Personally, it was a challenge," she added. "Obviously, that's what everybody around there was dealing with. But meteorologically, it was such an awesome experience."

Several national newscasters were assigned to cover the Western New York storm. NBC sent "Dateline" and "Weekend Today" anchor Lester Holt and Weather Channel star Stephanie Abrams, which prompted some locals to tweet about the storm's severity (as in, "It must be bad if so and so is here"). Dreyer was sent to the new snow capital of the world, Hamburg, which received more than 80 inches of heavy, white precipitation.

"We knew we had to get up to New York. We were trying to get to Hamburg," Dreyer said. "We took Route 20. I've never experienced a road being shut down before - especially a main thoroughfare."

"We had to stop at Dunkirk the first day, because we couldn't get through Dunkirk," she said. "That's when I first experienced whiteout conditions. It was just awful."

Though Dreyer has seen her share of snow, she said this storm was above and beyond anything she's encountered.

"My first market in TV was in Erie, Pennsylvania. So, I've been through lake effect snow before," she said. "And I know how it can set up. And I understand the concept of one town can get an inch of snow, then the town over can get feet of snow. So, I was prepared for it. And I knew everybody was kind of hyping it up as a historical event. But, after the first round of snow, when the second round of snow hit the same exact area, that's when it was like, 'Oh my god. This is unbelievable. This is incredible to watch this happen.'

"I just felt so bad for the people living in this area," she said. "I'm glad I got to experience it, because it's one of those things that you really don't grasp just how insane it is unless you're there experiencing it."

Snow wasn't the only thing Dreyer found in Western New York. She discovered residents are willing to help others - even in the hardest conditions.

"Oh my gosh, we experienced it firsthand," Dreyer said. "First of all, our generator on our live truck was not working. It broke, and that was our only live truck. So, we found the Lakeshore Fire Co. in Hamburg right along the water there. They let us plug (in) ... so that we had power for our live truck.

"They let us come in. They fed us. They were making homemade soup. They made us eggs. They couldn't take better care of us. They said, 'There's cots upstairs if you can't get to your hotel and you just want to stay here.'

"That was the first people that we ran in to.

"And then, our last night there, when the snow had stopped falling, but now there's, like, eight feet of snow on the ground, my producer got stuck twice. And the first place he got stuck, a guy shows up on a snowmobile. Random people are driving down the street, and there was probably about five different people who got out of their vehicles - stopped what they were doing - to help push him out of the snowbank that he was stuck in.

"And then, about six minutes later, we were going up the road and he got stuck again. And, out of nowhere, a tractor shows up. We pulled up this plow to the tractor and we towed him out.

"We ran into more people that helped us out of the snow than anything else. It was amazing. I actually have some of it on video. It was just so wonderful to see people helping in the middle of these awful conditions - to help us out, and they don't even know us."

"You guys handled it like champs," Dreyer said. "For the conditions you guys were dealing with, it was the best people to deal with it. It was a good place to be stuck in a snowstorm like that. So, thank you guys."

WGRZ Channel 2 meteorologist Maria Genero said she was "Buffalo proud" of how everyone came together in the storm.

"I think anyone who lives in Western New York has seen that on a regular basis," she said. "That's not new to us. Buffalo - we call ourselves the 'City of Good Neighbors,' and people do come out and help each other all the time."

"I couldn't be more proud to say 'I'm from Buffalo,' because what we went through, had that happened in any other part of the country, they would still be on their backside," Genero said. "There's no way they could've pulled through the way we did - and with the grace that we did. People just came out of nowhere to help one another."

A New Jersey native, Dreyer went to college for engineering, because "I love math and science," she said. But "engineering was a little boring." She transferred to meteorology since "I've always loved weather. I love thunderstorms, especially. My brothers and I, whenever it would snow, we'd have these huge sledding paths in front of our yard. I just love weather."

"I went to Erie, Pennsylvania. Then Providence, Rhode Island. Then Boston. Then I got called to the "Today" show," Dreyer explained.

"It's been a lot of luck. I've been pinching myself. But, I've been loving this entire journey I've been on."

She joined NBC News and "Weekend Today" in 2012. Dreyer said she thinks the famed morning news show remains popular "because it feels like a family. It's been around for so long, there's something comforting about it. ... It's relatable. It's down-to-earth. It's just very comforting to watch, I find.

"I just think there's something warm about it. I just love the vibe from it, and when I got there, how welcoming everybody was. It felt like a home, instantly. It was like, 'Yeah, this is a place I really hope I get to stay at for a long time."

"I will definitely be back," she said.

Especially if there's a blizzard outside.

"Well, I've gotten a lot of experience, because that's what I tend to do, is stand out in the worst conditions this country has to offer," Dreyer said, laughing. "I guess that's what I signed up for." 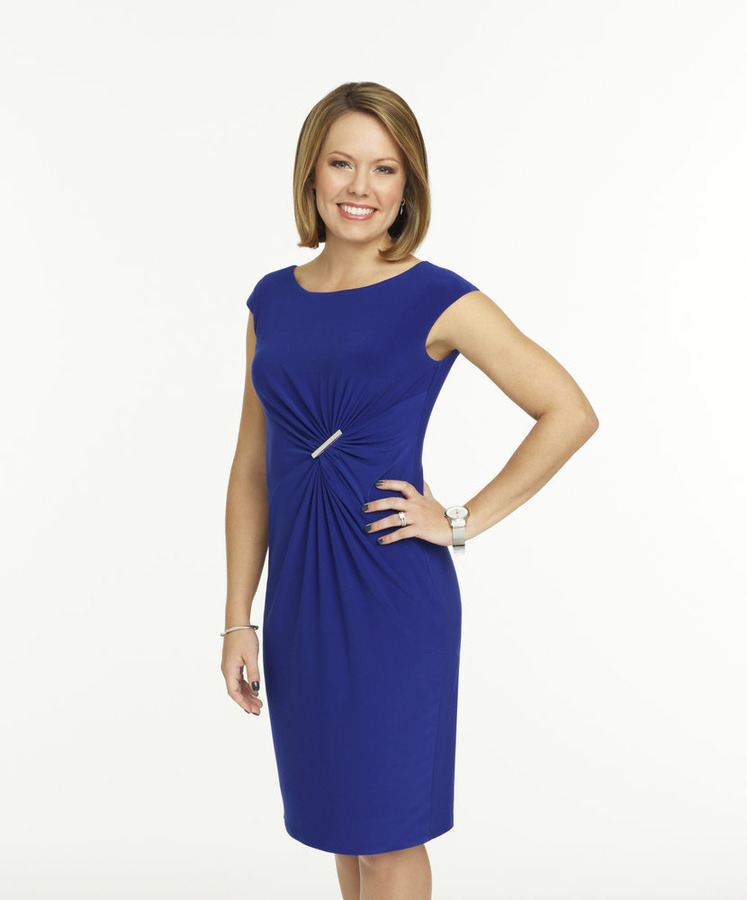 So, where did the storm come from?

Over the course of two days last week, parts of Erie County received snowfalls taller than the average man. We're talking six to eight feet in the hardest-hit areas.

How could one area get so much snow in such a short period of time?

WGRZ Channel 2 meteorologist Maria Genero said, "Everything came together for this storm. The wind direction. The open waters. The time of the year. The lake is still very warm. It hasn't even really cooled. It's still in the 40s."

"When the winds come out of the northwest they travel over Lake Erie and Lake Ontario, and there's a short stretch of open water to lift the moisture from the lake," she explained. "But when it's coming out of the southwest you have the full length of the lake to tap into all of that moisture - to pick up all of that moisture. And it laid it down in one large band, which was actually pretty narrow - only, like, 17 to 20 miles in width. But it just sat there. And normally these bands oscillate - even a little bit. (They'll go) a little further to the north, then down to the south. This one didn't move. It was a steady wind direction out of the southwest. It never moved."

Genero was a permanent fixture on Channel 2 last Tuesday and Wednesday. She and her colleagues stayed on air longer than their Buffalo TV counterparts. They extended their own regular news shows and pre-empted NBC's regular programming. WGRZ anchors offered updates throughout the snowstorm and spoke to many of Erie County's municipal leaders.

"I was very proud of the coverage our station had," Genero said. "Very proud to be part of that team. And I don't say that lightly. I thought they did a wonderful job."

"We started nonstop at 4:30 in the morning Tuesday," she said. "As the story unfolded and the severity of the storm really became known, we stayed non-stop until the evening shift came in."

Genero was pleased to see residents taking advantage of WGRZ's request for 20-second "Thank you" videos. Many people submitted blurbs thanking their friends and the strangers who helped shovel, snowplow or push and pull stuck vehicles back onto the road.

"I think, after the Blizzard of '77, Buffalo always tried to defend itself from the perception that we have horrible weather; that winters were horrible," Genero said. "You know what? Yeah, we have tough winters. There's no doubt. And there's no defensing these storms. (But) they're an aberration. If you live here, you know it's not like that all the time."