Pictured is an artist's rendering of Ellicott Development's Village of Lewiston plaza proposal.

Village of Lewiston Planning Board receives plaza update from Paladino

Paladino, Planning Board: Plaza has challenges

After waiting nine months for Ellicott Development CEO William Paladino to provide an update on his company's Center Street property, the Village of Lewiston Planning Board asked him Monday for time to study his proposal before voting "yes" or "no" on its conceptual merits.

Ellicott Development's 4.1-acre site stretches from the site of the former Country Doctor to the North Eighth Street corner. Paladino intends to build a mixed-use plaza complete with a pharmacy, fast food restaurant, retail and professional units and two stories of apartments.

"We're kind of protective of the village," Planning Board Chairman Norm Machelor said. "All of these elements that go into making successful retail spaces on Union Road in Cheektowaga, they don't apply here. ... And we can't look like Military Road in Niagara Falls, either.

"When they come (to Lewiston), we want them to have something unique."

Paladino proposed building three units on site. Looking into the plaza, from left (west to east), the first building would be set back from the road. The upper end and roof would be visible to passersby.

The two-story second building, on the east (Smith Brother's Pizzeria) side, would be street level. The top story would be on Center Street, while the bottom would descend down into the parking lot, facing the plaza's inside and back.

This building has two 5,800-square-foot floors. The top could be a restaurant, and the bottom retail units.

"We initially had this building set back, also. After discussions with the village, we figured we couldn't possibly move this up (west side - McDonald's building), because the topography is a little different in this area. (Instead, we'll) bring this building (east side) right up to the street," Paladino said.

The third building, at the far north side of the plaza, would have a 14,728-square-foot, ground-level pharmacy, and a 4,766-square-foot retail or professional space on the east side.

The second and third stories situated above the pharmacy each would have 13 or 14 apartments, 17 of which would be two-bedroom.

"Initially, we had a smaller building in the back, and just single-story," Paladino said. "Now we're looking to propose a three-story building with residential. We've always wanted to have some form of residential in the project."

The plaza would have four entryways: A narrowed "in-only" driveway on Center Street, two wider access points on North Eighth Street (for both in and out traffic), and one on Onondaga Street (also in and out). 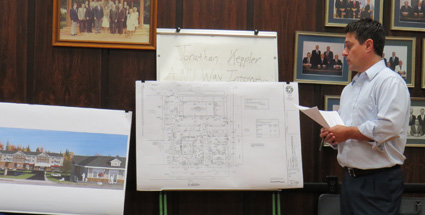 William Paladino explains his plaza plan to the Village of Lewiston Planning Board. (photo by Joshua Maloni)

"We do want to do a heavily concentrated landscape plan," he added.

The plaza would have sidewalks and stairs navigating people around the property.

"We think this is the best plan, after all the ones we've gone through," he said. "It gives us what we feel is a good look. We're happy with the way the layout goes, and the flow that brings you into the site and out of the site."

"Based on our tenant mix, we believe this (plan) also provides the best opportunity to find the right tenant mix in order to make this project work from a financial standpoint for us," Paladino added.

"We bought this property back in 2012, looking to do a retail-type development," Paladino said.

Since then, he's had several rounds of discussions with potential tenants and village leaders trying to overcome the site's geographical limitations. The property steeply descends down to Onondaga Street.

"It's a challenging piece of property due to the topography on the site," Paladino said. "There's a drop from roughly 25 feet on the site. We've explored many different options to do something on here."

"In order to make this work, you're going to excavate that front piece (for the west-side building)," Machelor said. "I don't get why we have to excavate in order to make something that we don't really want to happen. It's already at street level."

Planning Board members have asked for more street level units.

Paladino said that would be difficult, because tenants have different requirements for visibility, parking and drive-thru access.

"We've been working on this for 14 months now with them," he said. "We've gone round and round and round with them, and other retailers. And we've had some people just walk away, but other people come back and ask us, 'Can you set everything back?' And we're, like, 'The village isn't totally going to go for that.' "

Paladino said he and his team have tried to imagine every scenario and every possible placement for the three buildings.

"In doing it, for various reasons, all different options we've tried here because of cost issues and/or tenant issues to make them comfortable, we haven't been able to make something work," he said. "What we're trying to do here is bring together our ideas, some of the town's recommendations, and things we've discussed with some other people here in the town over the last, probably, eight to nine months, and different tenancies that we're trying to mix into this project, also."

Paladino said he wants a mix of regional and local tenants. In order to do that, he needs to have a few national tenants, too, or the rent would be prohibitive for the smaller businesses.

"We have commitments from one tenancy - from McDonald's - at this point. That's the only tenancy we have a commitment from. Other ones have looked at it, but, when they've heard some of the feedback from the village and some others, they sort of want to see what we ultimately get approved on this site before they make further commitments to it, and where, exactly, their costs would come in based on that plan that we do have done," Paladino said.

The Planning Board discussed a motion to grant Paladino conceptual first approval.

"I'm really kind of reluctant to say, 'Yeah, well, the concept's fine,' and we have - and I do - have this list of 18 items to talk to you about," Machelor said.

"After this is done ... if we accepted it lock, stock and barrel, we live with it forever. That's the way it's going to be," he added. "If we say, 'Well, you know, we're not really ready for this - this concept - we're not into that,' it always becomes some potential use in the future - some potential other way of doing it in the future that's better than this.

"Believe me, this thing's on our plate every single week for the last 14-15 months," Paladino said. "We've been working on this and talking about it."

"The village has a Center Street vision, which we've been working at for 30 years to try to make it like it is, and it's become iconic and popular," Machelor said.

"We don't want another hole in it," he added. "It's like property. There's only so much of it. We've only got so much Center Street, and we're kind of protective of it."

The Planning Board tabled the motion. Members will meet with Paladino Nov. 24 to go through the village codebook and discuss possible variance options.

The meeting is open to the public, but the board is unlikely to take comments from the audience. Machelor said no decision would be made at that time.

Pictured is an artist's rendering of Ellicott Development's Village of Lewiston plaza proposal.