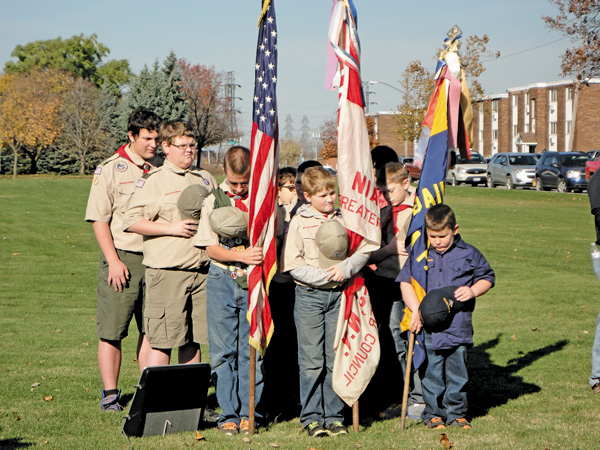 Article and photos by Autumn Evans

The Town of Niagara community gathered for a Veterans Day ceremony at 11 a.m. Tuesday at Veterans Heights Park, located at the intersection of Lawson and Bellreng drives. The event was organized by the Town of Niagara Lions and Lioness clubs.

Speakers included pastor Ron Maines from the Forestview Church of God, who led the ceremony in prayer, Air Force and Vietnam veteran Dale DeBacco and Sgt. Robert Brown-Griffin, a current member of the 914th Airlift Wing at the Niagara Falls Air Reserve Base.

DeBacco, holding the ceremonial flag from the burial of his uncle, a World War I veteran, spoke to the crowd about his experiences in adjusting to his life after coming back from the war in Vietnam.

"I used to hunt on Veterans Day. I found solace, I found relaxation in the woods, still thinking about my military experiences," he said. Then, one year, his daughter convinced him to go to a Veterans Day ceremony in Hyde Park instead.

"I came out of my shell and it was a great experience," DeBacco said. "I'm happy to say that I no longer go in the woods on Veterans Day. I enjoy the festivities. There's good times and bad times on everyone's minds, but I found out it's good to observe them."

Brown-Griffin spoke about his current experiences in the Air Force and praised veterans for their service.

"There are very few words that catch me quite like the word veteran does," he said. "It's such a short word, but in today's world it means so much and identifies a person in just seven letters."

"I'm more than fortunate enough to still be here and be able to speak to you, but it's because of these men and women that I'm able to do that, both those present and not present," Brown-Griffin said. "I've been able to meet many men and women who have proudly served right alongside me or around me.

"I could probably spend the rest of my life telling many stories of times of great friends that I've met: men who have been a shoulder to lean on, to laugh with, to share with, and even to cry with."

At the end of the ceremony, all veterans present came forward and were presented miniature American flags and lapel pins for their service. The flags and pins were handed out by students from the Catholic Academy of Niagara Falls and Niagara Catholic High School.

"This is the first year we've done it, and it's an honor," said Letitia Kowal, a fifth-grade teacher at the academy. Most of the volunteers from the school were from her class, or had siblings in the fifth grade. Kowal said they were invited to participate because of their consistent work in collecting eyeglasses donations for the Lions Club.

Lion Angelo Onevelo, a Vietnam veteran, led the proceedings. Boy Scout Troop 841 from St. John de LaSalle Church served as the color guard and performed the flag ceremony. The Fredrick Cadille Post of the American Legion and the Lion and Lioness clubs presented wreaths at the park's veterans monument.

Touching on the significance of the holiday, Onevelo addressed his fellow veterans. 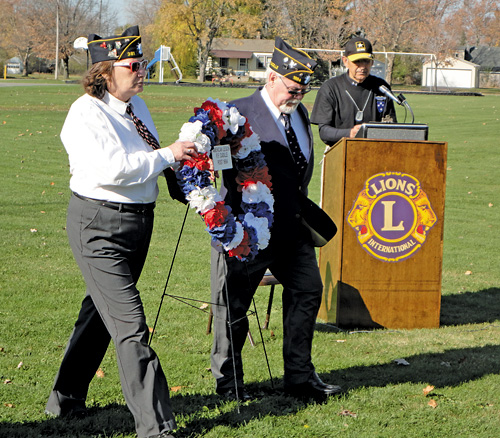 See more photos in our gallery