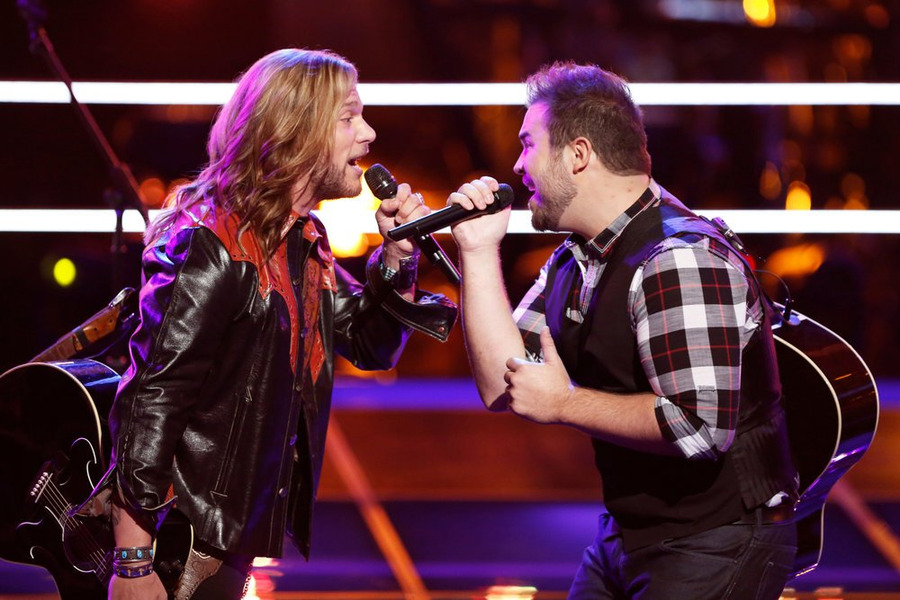 For better or worse, coach Blake Shelton paired his top two male singers in the "Battle Rounds." What ensued was one of "The Voice's" best country music performances ever.

"Guys, was that not crazy?" coach Pharrell asked the audience. "It was crazy. How do you choose?"

It wasn't easy for Blake to pick between Craig Wayne Boyd and James David Carter following their emotional, fist-pumping cover of Pat Green's "Wave on Wave."

Pharrell likened the performance to a great boxing match between two top pugilists.

"I remember turning for you, and everybody's fighting," coach Gwen Stefani told James.

"You were really shining tonight," she told Craig. "Your voice is so strong, and you're so comfortable on stage. It's not like you're in a contest, it's like you're performing."

"That was amazing," coach Adam Levine said. "You guys achieved with the 'Battle Round' I think what we all hope for, which is pairing people together, doing a song, and having it feel like a duo. You guys are dead equal, as far as I'm concerned, and it was an amazing performance."

"I think Craig and I, I think he'll vouch for this - I think we definitely wanted to be treated as a duet and not ... try to (talk) each other up and give the performance, you know, the credit and not necessarily individually, you know, try to ... kill each other," James told BTS. "That really wasn't - I didn't feel like that was our goal.

"In the same breath, I think Craig and I are definitely very different stylistically. That's why I think it was a cool collaboration, just because we come from - I think we're influenced by some of the same things but, you know, vocally, I think Craig has even said he's grit and I'm glass.

"So I think the mixture is really cool. What I took away from it was, you know, honestly my gut, I felt like either one of us is going to get stolen. It's hard to explain that, but just being in the atmosphere, you just kind of get a feeling, like, you know, you look at past (episodes) and, you know, country artists do seem to do pretty well on the show.

"So I feel like it would be an advantage for one of the other coaches to grab the one that didn't win, but to me, it was - it really was even, you know, down the middle of a performance, and I'm proud of it. And, you know, hopefully Craig's proud of it, but I feel like we. ...

"I feel like we accomplished what we wanted to accomplish with the performance," James said.

"Gosh, Craig, your voice projects so much, and with so much ease - and James has these runs that he throws in that are from another planet," Blake said. "I wish somebody would've sucked, because it would make my decision a whole lot easier."

After some deliberation, Blake selected James, saying he had a better handle on where he wants to go and what he wants to do as an artist.

Craig said his goodbyes and thanked Blake. As he headed off stage, something unexpected happened: Gwen stole him.

"I know it seems like a weird pairing, me and you, but you were so natural, and your voice is so strong, and I just want to dress you up," Gwen said. "I want to do different hairdos. Can we do that together?

"Thank you for the second opportunity," Craig said.

"I'm very excited to work with Gwen," he added. "The pairing is definitely unique, but it's going to be a blast."

"He just needs to be polished up a bit, but he's dope," Pharrell said.

"I walked off of that stage with one more step. I would've not been on the show anymore," Craig told BTS. "And - but I was walking away knowing that I left everything up there on the stage, and I thought that the performance with James and I was an amazing performance.

"And I - watching it back, I even felt even better about it. What a great guy to sing with. And like he said, it was - I've been tweeting that our a little bit, it's glass and grit, you know, and it was really fun."

As to working with Gwen, Craig said, "You know what? I kind of look at it as good music is good music, and I think that she felt like I was - that I needed to stay on the show, and that's why she hit her button and kept me on there. And I was very, very flattered and honored to be part of Gwen's team."

James and Craig advanced to the "Knockouts," which will air following the "Battle Rounds."

"The Voice" continues Mondays and Tuesdays at 8 p.m. on NBC. For more on the show, visit www.nbc.com/the-voice.